Posted at 13:02h in South Asia by Operation Groundswell 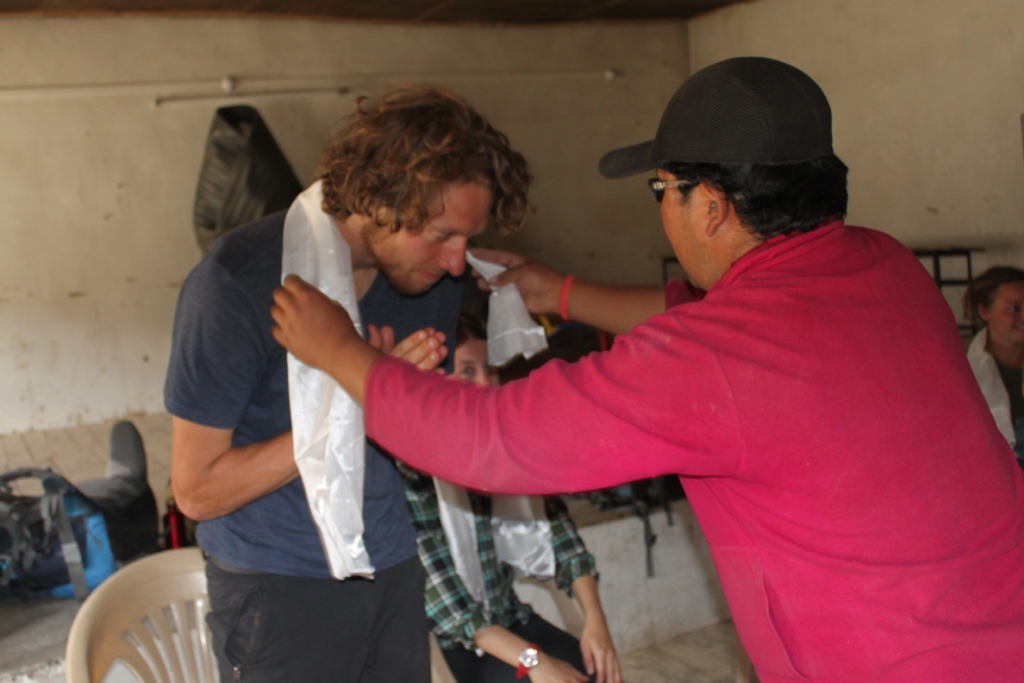 We camped slightly north of the village, making a few little friends who came over to our tents to check out who the newcomers were. 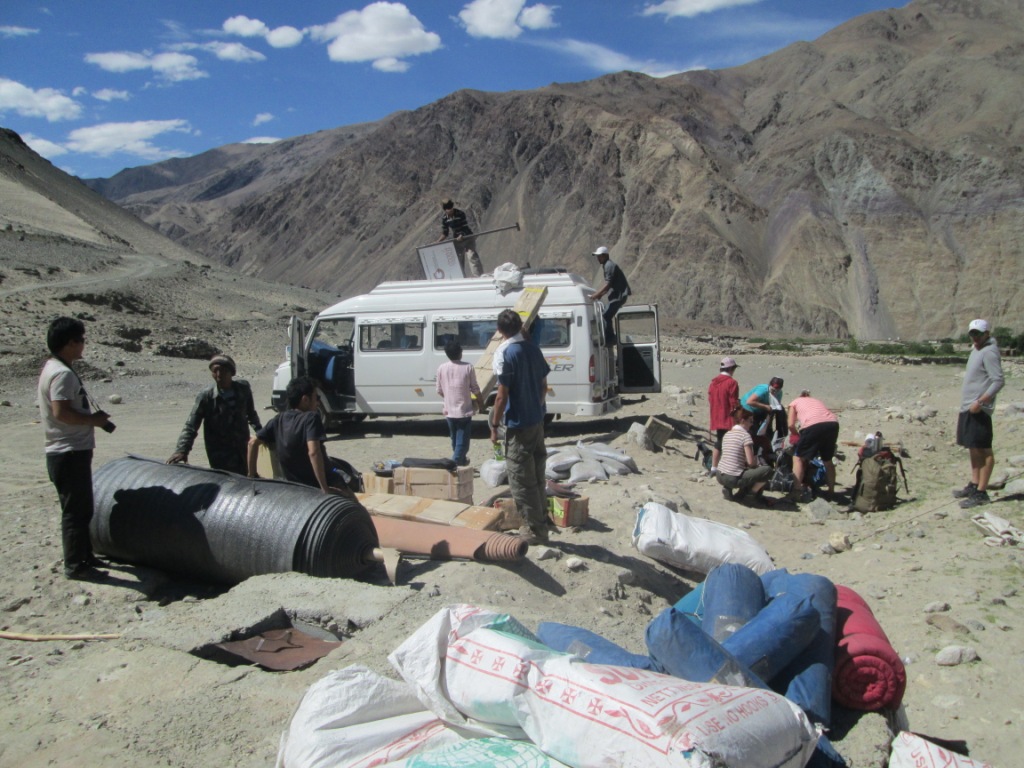 The next morning, the group made the 3-hour trek up to the monastery and was greeted as the third visitors the monastery has seen in the last five years. 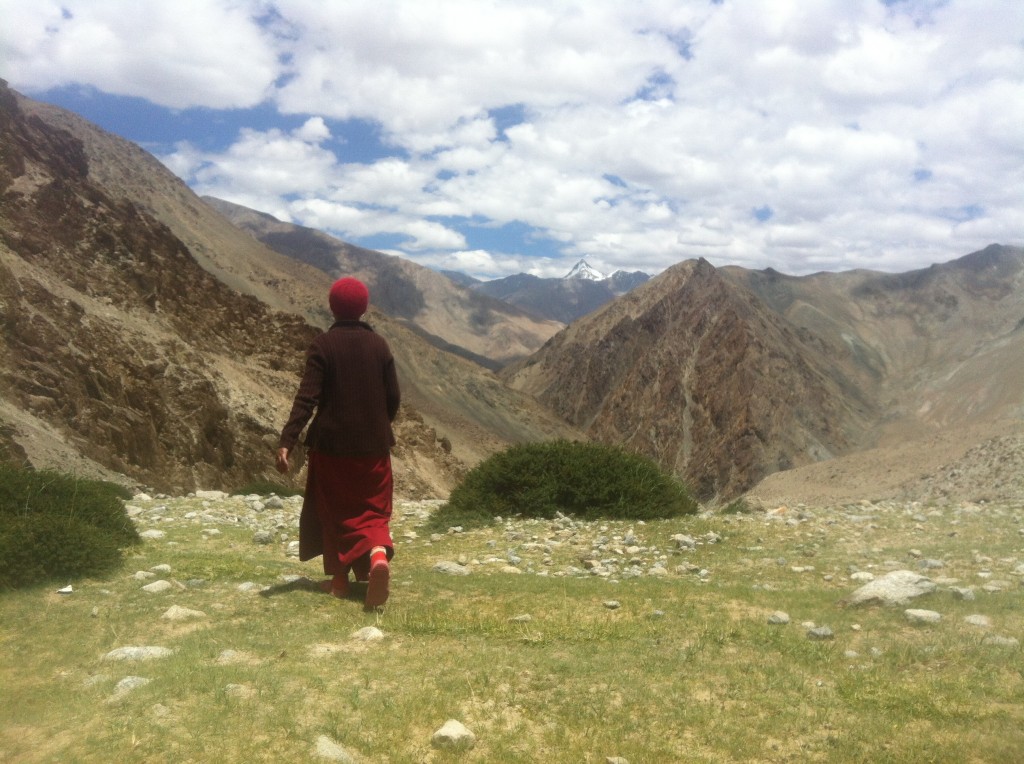 Once there, we were warmly welcomed again by the Rinpoche (Tibetan lamas and other high-ranking or respected teachers), whose father started the monastery 60 years ago. The Rinpoche made a special trip just to welcome and thank the group. The ceremony was very special and the group was honoured by his presence. 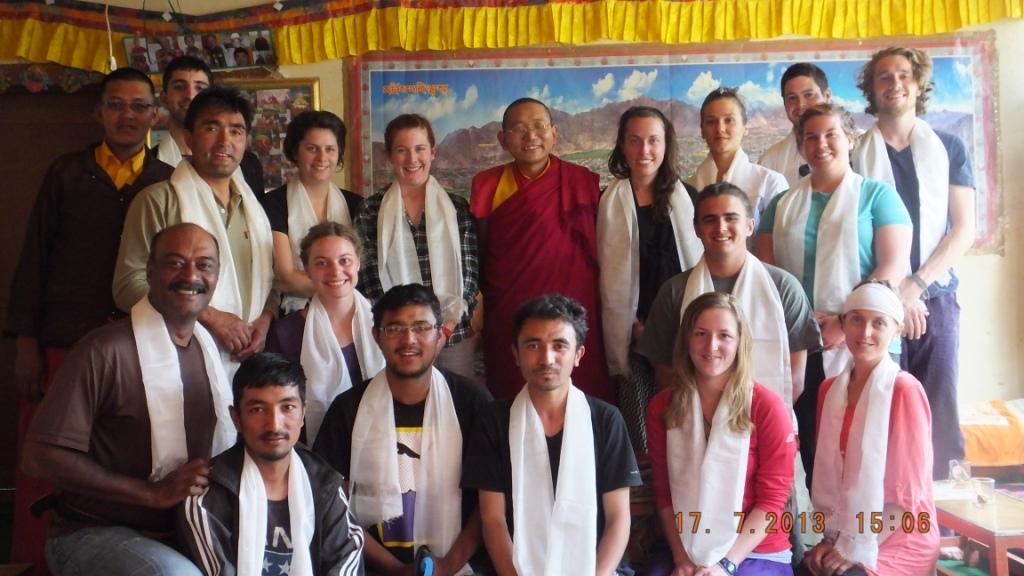 The following day began our work with 17,000 ft. Our average day at the Skidmang Monastery was broken into three parts – with a group this large, it was not hard to spread out the tasks. Three people were designated to alternate with three others as teachers in the classroom while the remaining participants were directed by the supervisors to work on construction projects on the monastery, such as rebuilding the second classroom and assembling the playground.

Our OG group aimed to help rebuild the second classroom, which was deemed unusable and hazardous because the north wall was cracked from water damage that occurred over years of the harsh Himalayan winters. That left 17 students, aged 5-22, and two teachers to squeeze into one classroom the size of a garden shed to learn every day. We wanted to help rebuild the second classroom so that the learning environment was improved and that the class could be split into two learning groups based on their levels and abilities. We helped to demolish the wall, and rebuild it using sustainable resources and local support so that it can remain standing and secure for the years to come. 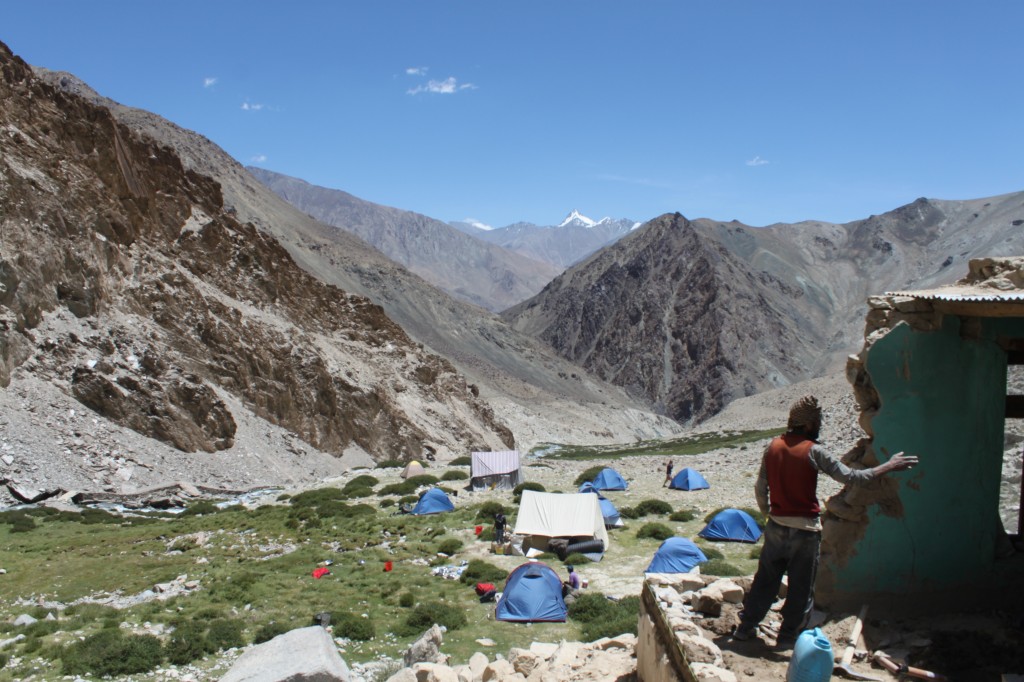 Our basic construction jobs began at 9:30 a.m., where we met with our Ladakhi mason and helped him in the reconstruction of the school’s second classroom. Our participants mixed mud. Yes, that’s right, mud is their main bonding agent at altitude! We also sifted rocks and boulders, dug trenches, painted and plastered, as well as ensured the longevity of the wall’s structure by coating each wall with lime plaster (although it is debatable whether more lime ended up on the wall or on Susan and Bailey!)

The second job consisted of assembling a small playground for the children to enjoy. A small group of us trekked up higher than the school to assemble this project, often with limited instructions and odd numbers of screws, nuts or bolts, but with a little determination and a lot of humour, we managed to pull it off!

Our teaching curriculum consisted of introducing the 17 little “monklets” to a reading program that was originally implemented as a library system by our partners, 17,000 ft. 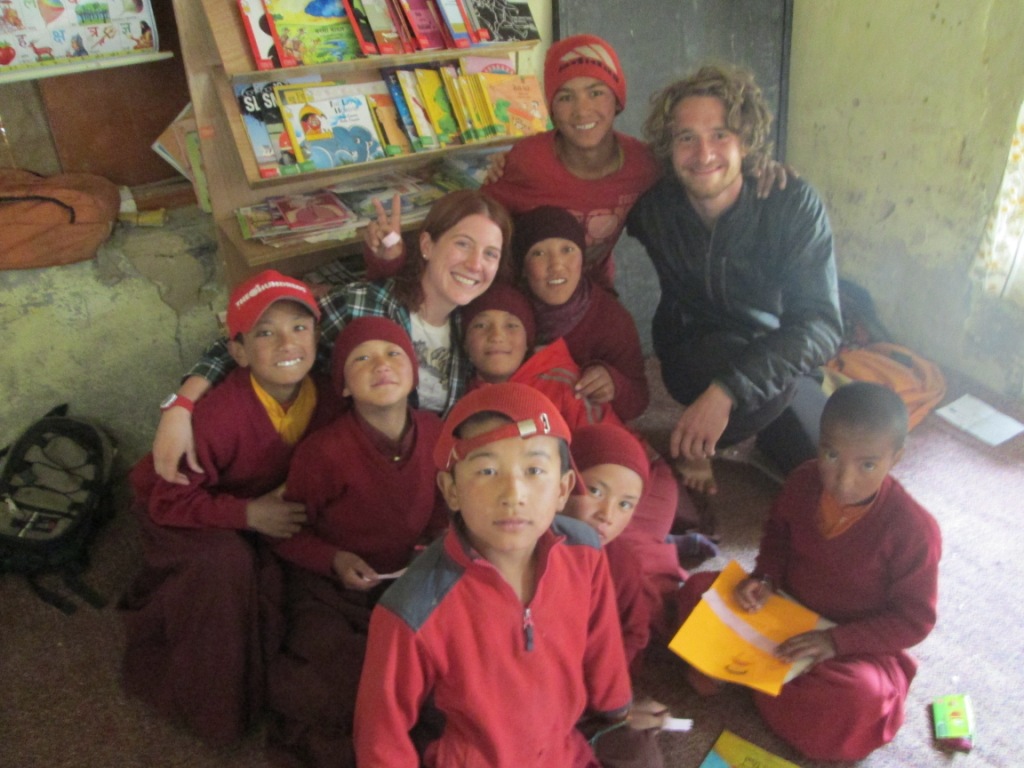 Reading with the little “monklets”

We had a fantastic time introducing more English into their everyday lives, as well as opening doors to other topics such as science, drama and role playing, geography and nature. 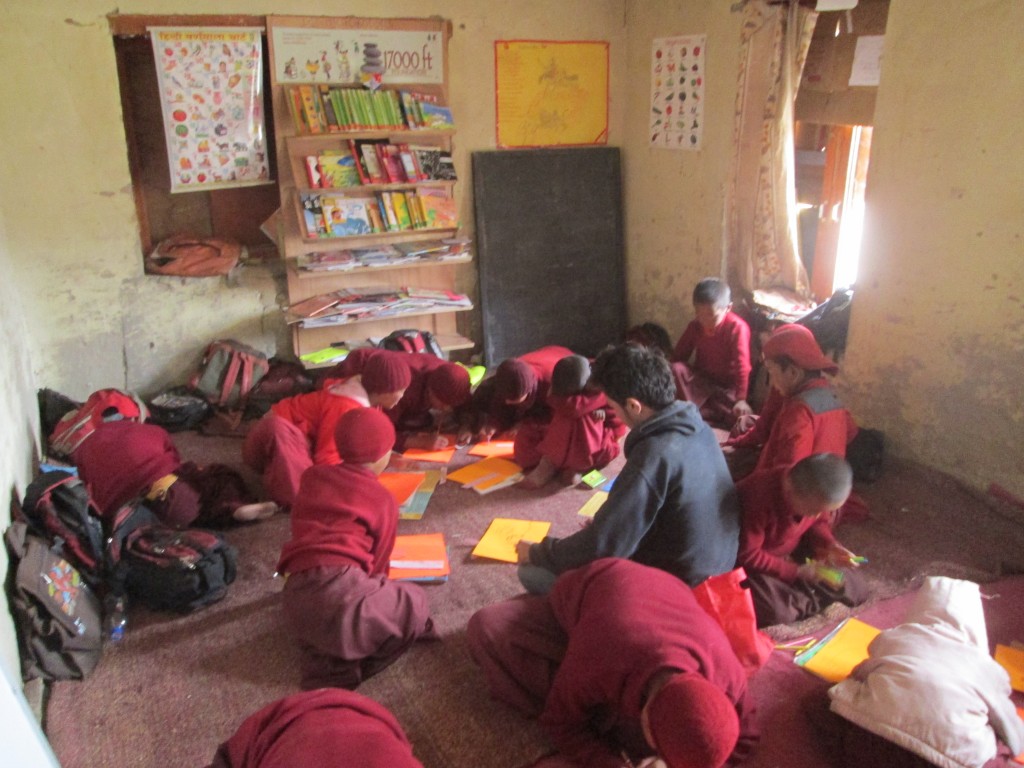 Lotsa learning goin’ on over here!

Working with such eager students with a never-ending thirst for knowledge was a privilege for all of us to behold. 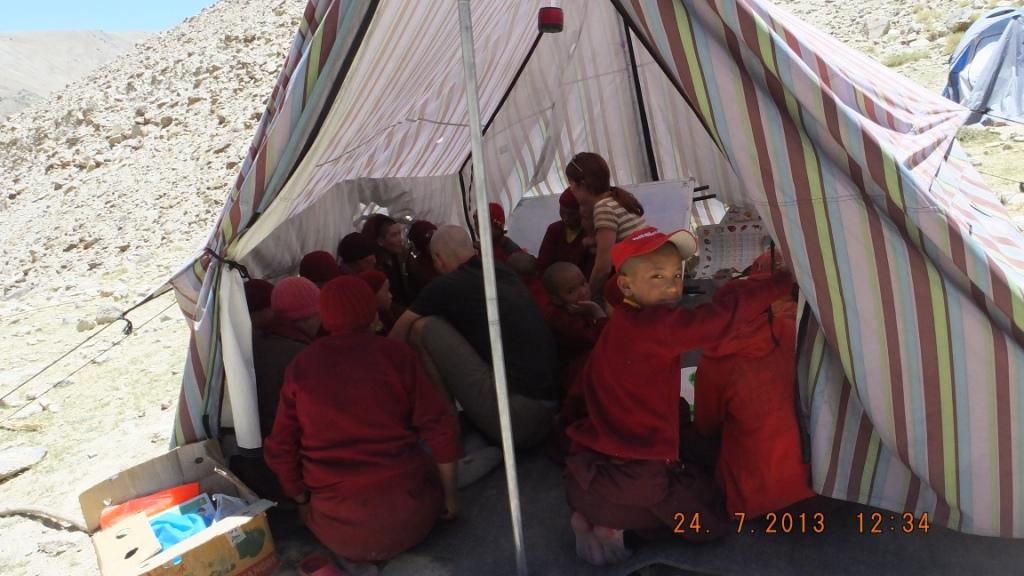 Turning our tent into classrooms

The group would end our work days tired and humbled. The young monklets would come down to our camp to play with us. Teaching them games such as Duck-Duck-Goose and Hide-and-Seek, we shared many laughs. 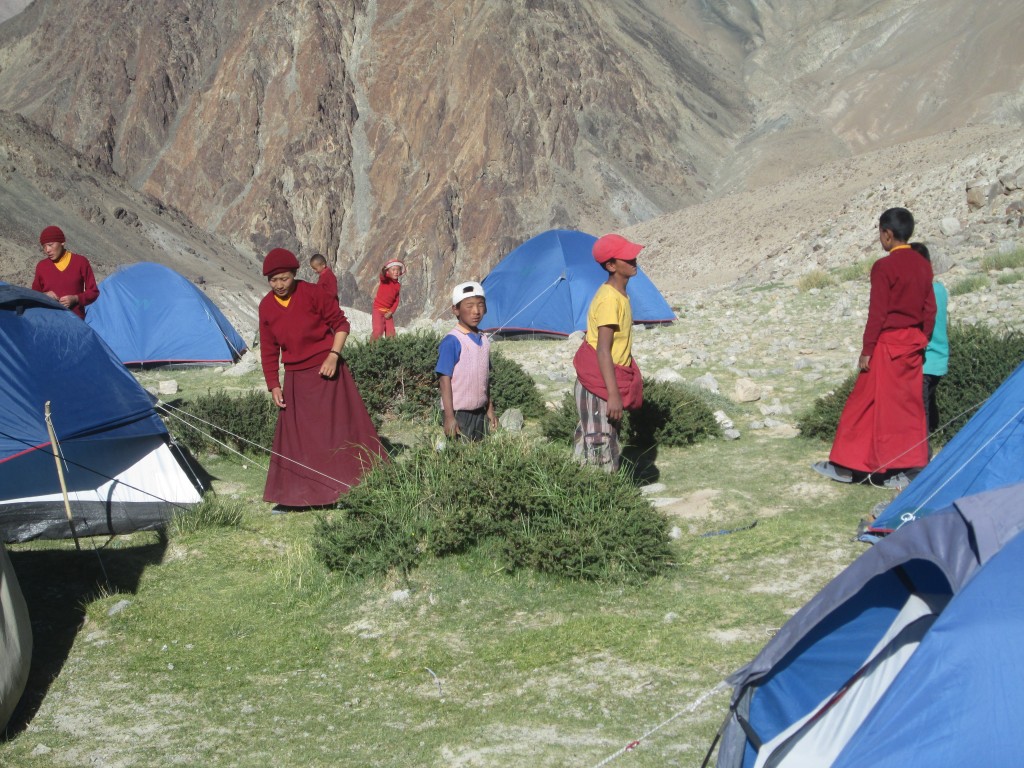 Games with the monks

Once the monklets would go for puja and dinner, the group bonded over card games and other shenanigans. Feeling rather inspired by the clean cuts of the monks, one participant decided to shave his head. A true team effort, the shave took about four hours, the help of three participants and three different instruments to produce an almost-perfect shave (it was getting dark near the end) and lots of amusement for our team and the monks.

We also enjoyed thorough group conversations. One specific discussion about sustainability and ethical travel really resonated with us, as we realized that the materials we were using to repair the school, while different than what we would use at home, were sustainable as they were natural resources that could be used to repair the school in the future if needed. The ethical travel aspect was also eye-opening, and many participants gained knowledge to continue travelling with many of the concepts in mind. 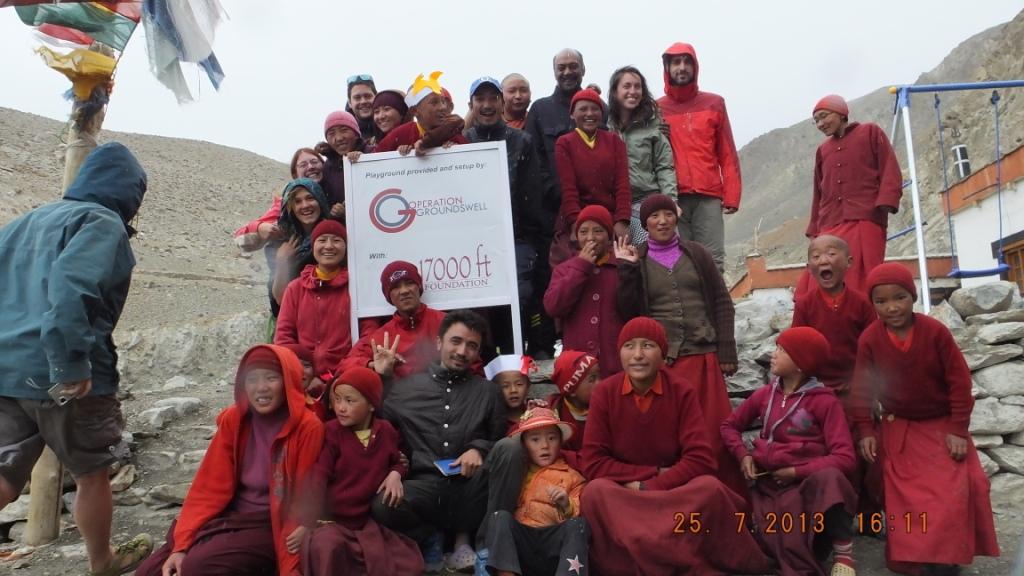 On our final Sunday, the monastery threw a joint Thank You dinner, and a celebration for one of our participants, Alex’s, birthday. The dinner was delicious, but what was more special was the birthday festivities. The monklets presented Alex with a card, one that was filled with love. 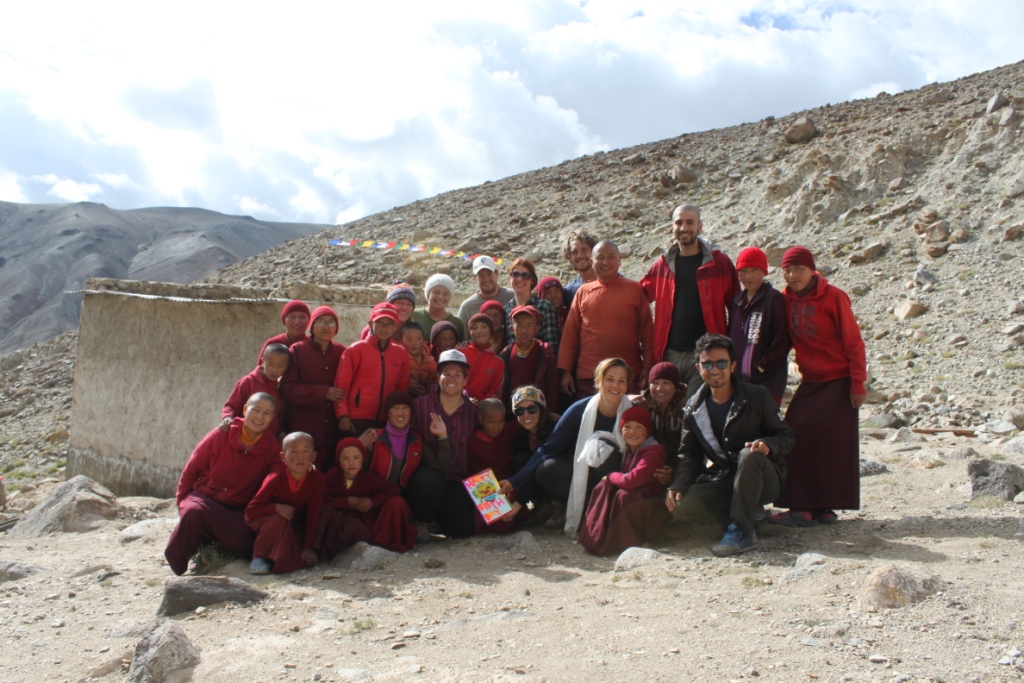 After we returned to camp that night with full bellies, the 17,000 ft. staff surprised Alex with a birthday cake. The staff had spent the entire day preparing an amazing carrot-walnut-raisin cake – without a stove – and at altitude. Definitely not an easy feat!

To wrap up our time at the school, we gathered to watch the students present what they learned throughout the ten days. They showcased their knowledge about earth, space, and oceans, read aloud their individually created “Who Am I?” books and role-played one of their storybooks in a hilarious and animated skit. 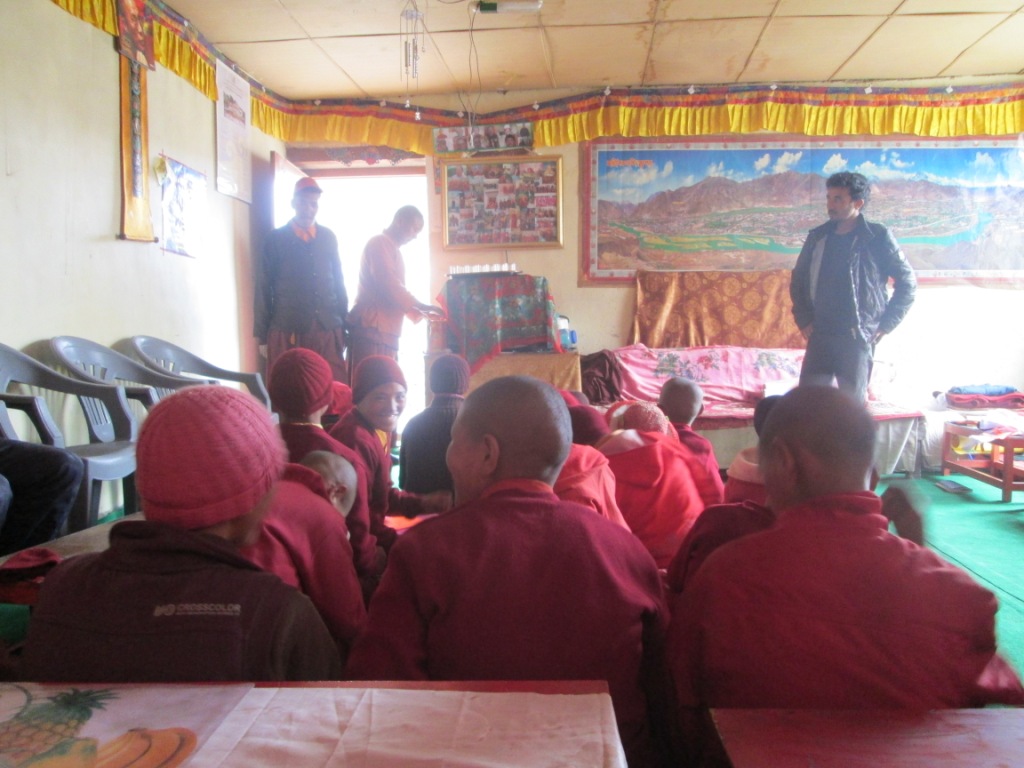 We trekked down to the village the following morning to finish the construction of the second playground and to inaugurate it with the president of the village and the village education council.

The villagers were just as friendly and welcoming as they were when we first arrived and the children thoroughly enjoyed playing on their new equipment. 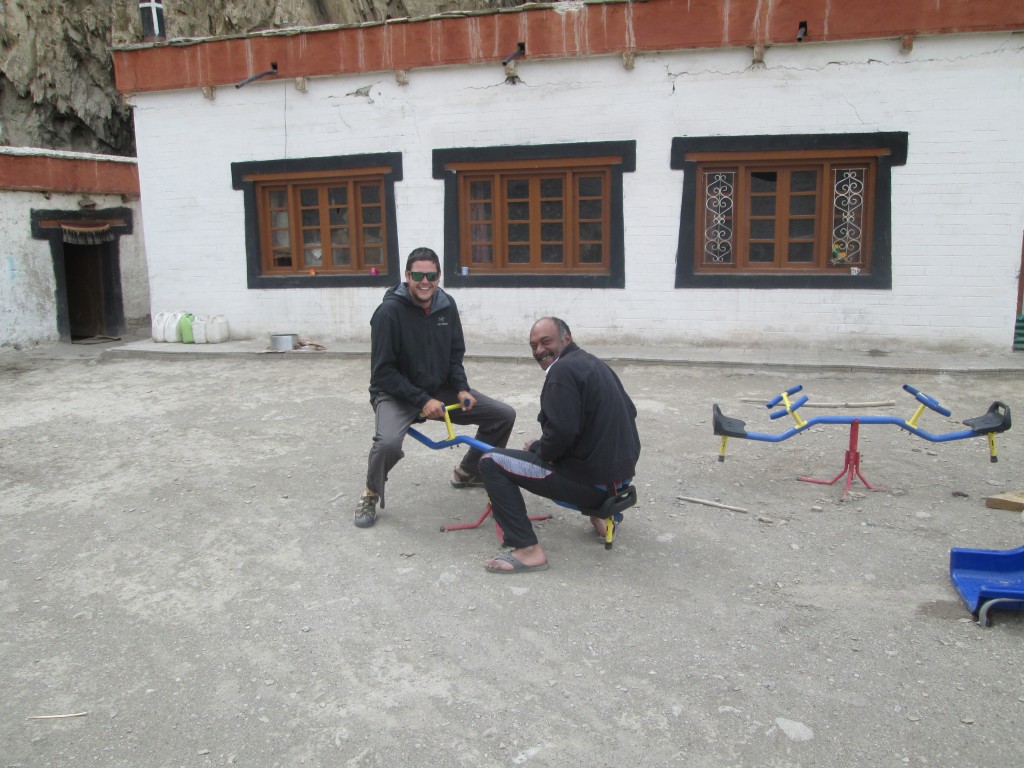 Alex and Sahu trying out the playground we worked hard on!

We left Skidmang with teary eyes, full hearts and smiling faces, ready to take on our next adventure: a trek through the Markha Valley.