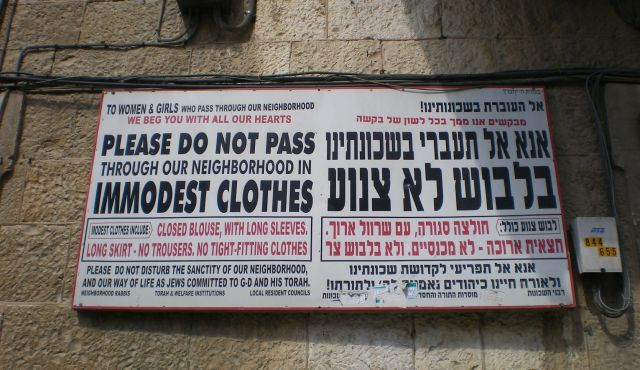 Posted at 17:13h in Middle East by Eric Schreiber

The day we went to Ramallah, we took a bus in East Jerusalem and decided to cross over through the Mea Shearim neighborhood, one of the most ultra-Orthodox Jewish neighborhoods in all of Jerusalem. We were warned to fully cover up and as soon as we turned the corner onto the Main Street we were greeted by massive posters in Hebrew and English warning us that the residents of the neighborhood did not appreciate visitors coming in and that if they do enter, the residents required visitors to be covered up. The posters were pasted, one over the other, all over the walls of the streets. A woman in traditional ultra-Orthodox Jewish attire told Alex and I to pull up our sweaters and cover our necks. Little kids stared and pointed and ran away. I could feel our pace speed up as we walked down the street, and it felt like we were all holding our breath until the street finally opened up and spit us back into a normal street.

It seemed we hadn’t seen enough because when we came back from Ramallah and the checkpoint, Jeremy, Hannah, Miriam, and I bumped into the rest of our group on Hadin street, where a group of ultra-Orthodox Jewish men had gathered in masses to yell at any cars that would pass by. On Shabbat (from Friday sundown to Saturday sundown), the Jewish peoples practice a day of rest, and sometimes this means not pressing buttons, or driving, or turning off lights, etc. These neighborhoods see to a very strict practice of Judaism, and it’s well-known around Jerusalem. Therefore, there have been situations in which drivers cross through as a sign of disrespect, which stirs up the residents and causes them to erupt in generally harmless yelling. A few times, this can become violent in the sense that you’ll see a few of them hit a car with their hands. But above anything else, what you hear them yelling is “SHABBAS” at the top of their lungs in an almost amusing choir.

Naturally, this street was on the way home, so of course we walked right across. Still protected by our scarves and sweaters, and more so by the police escorts that had begun to form a barrier around the roads from the sidewalks, we crossed among protests of “SHIKSA” (a derogatory term used for non-Jewish women in Yiddish) and more protests of “SHABBAS.”

It was enlightening to see the different branches within Judaism in person. Up close, all extremisms can be pretty frightening. It’s even harder to think about peace when we face these kinds of opposite-ended thinkers, particularly when we find ourselves as mere outsiders looking in, and find it hard to stand on any side of the spectrum.