Posted at 23:41h in Southeast Asia by Operation Groundswell

In the remote hills of northern Thailand, a fading way of life continues to persist amongst the Lahu people in spite of the rapidly changing world around them. Traditional bamboo homes, small gardens, rice farming, a few pigs, chickens and a strong sense of community fill the small village.  A reality far removed from ours, the people in the Jafu village now feel more like distant relatives of the Operation Groundswell team as opposed to the complete strangers they were a mere three years ago.

Life is beautiful, but hard for the people of the Jafu village. The implementation of conservation initiatives to create national parks in the forests where they’ve lived for hundreds of years is done with good intentions. Unfortunately, it is done with little regard of the impact it will have on the displaced individuals who have lived in harmony with the forests for centuries.  With very few of the older generations being able to read, write or even speak Thai, the likelihood of being able to integrate smoothly into mainstream Thai society are slim. The Mirror Foundation is working hard on ensuring the younger generations are getting a Thai education in order to meet the challenges of the future, while helping maintain the traditional way of life the hill tribes people are accustomed to.

Over the years, Operation Groundswell groups have played a key role in making life in the Jafu village sustainable. After an accident with solar panels, the whole village was burnt to the ground, taking with it all their possessions. Relocating to the nearby village, their helpful neighbor’s homes were destroyed by a small hurricane the following year. Life has been hard and morale low, to say the very least. Since 2010, our teams have aided in rebuilding the five traditional bamboo homes, water tanks and toilets in the village and we’re proud to say that the village is starting to look pretty suave. 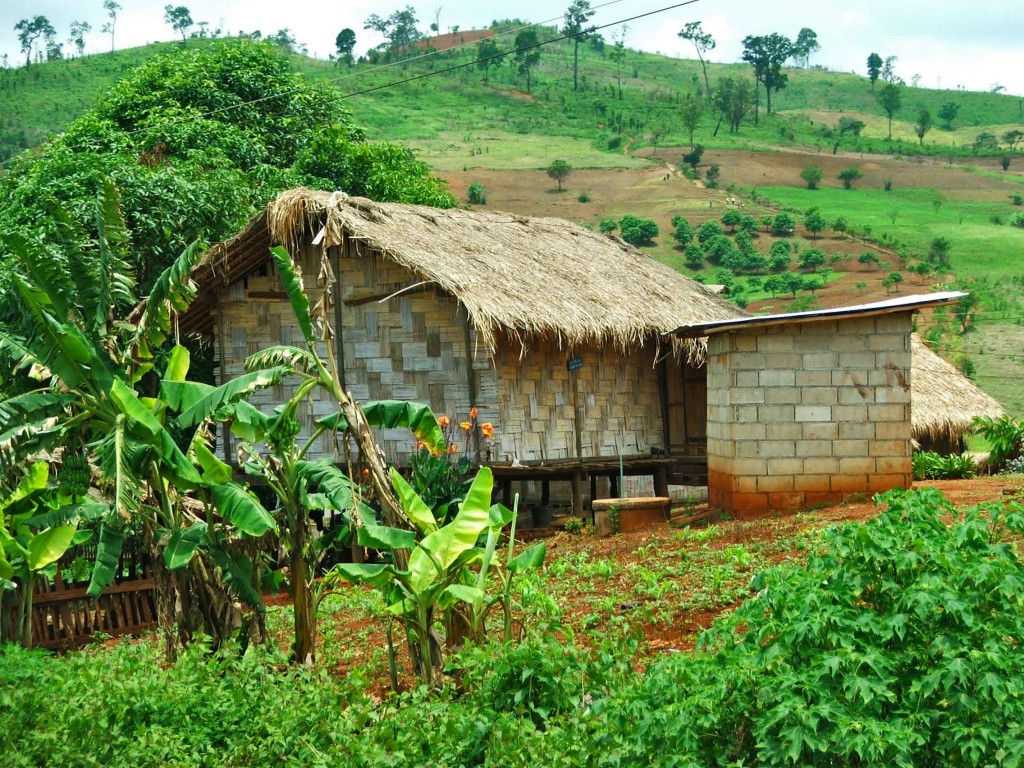 Once again, our crew made the grueling 7-hour trek up and down the steep inclines in the blazing temperatures of a Thai summer. Led by our jungle ninja Serachai, we all made it there alive and were able to begin enjoying the incredible views of rice terraces, rolling hills, streams and bamboo. It’s a long journey to the Jafu village, but the view is totally worth it!

After a long night of sleeping on bamboo floors with the pigs singing beneath us and the roosters waking us promptly at 5am, we set to work. Working as a team, we carried several massive beams from one village to another, each weighing at least a couple hundred pounds. After the support beams came the mounds of bamboo from the jungle, the grass roof, and finally, the walls. Over the course of our time there, the remnants of the previous home were dismantled and rebuilt into a beautiful new home for the young family beaming with pride.

To be fair, we were not so skilled at the hammering of the nails into the hard wood, nor were we so excellent at scaling the beams of the house to tie on the roof, but damn we were good at carrying things up and down those hills! The whole village worked together, shared meals, music and their homes with us. The experience will not to be forgotten by anyone!

In celebration of the construction of the new home, a pig was slaughtered in the village. An animal that is highly revered in Lahu culture, pigs are thought to be strong and sturdy on account of their four legs and being low to the ground. It is believed that the pig’s spirit will protect the new home. It was an intense moment for our crew, but certainly a strong reminder for us carnivores. Absolutely nothing was wasted either! Even the ashes were used to make toys with the colorful fabrics they found.

Upon our departure, moral was at an all time high! The children had just returned home from a week at school in town. The smell of fresh pork cooking over the fire filled the air of the new strong homes. Laughter and smiles were in abundance when the village chief with his toothless smile, genie pants and machete in hand said, “Thank you. If it was not for the kindness of your groups, who knows where all the people in the village would be living now? Maybe far away from their family with no job and no happiness…we are very happy. Thank you.”

That about sums it up.

Abo-dya! (hello, goodbye and thank you in Lahu)