Posted at 01:00h in Southeast Asia by Operation Groundswell

We successfully escaped the grasps of all the border scams crossing into Cambodia from Thailand! “Ma’am it’s more expensive at the border!” “Sir, it’s impossible to get your visa at the border. You must do it here.” “$20 US? Oh, no the price changed it’s now 1000 Baht. Take it from us, it is possible to cross the border into Cambodia and get a visa upon arrival for $20US.” The scam is not at the border, it’s before you even arrive!

After a 24 hour bus ride from Chiang Mai in northern Thailand, we arrived in Siem Reap, Cambodia. A city visited by tourists around the world who come to marvel at the ancient, stunning ruins of Angkor. Built through the 9th-13th century, the wonder of Angkor still stands as a testament to the strength and resilience of the Khmer people. 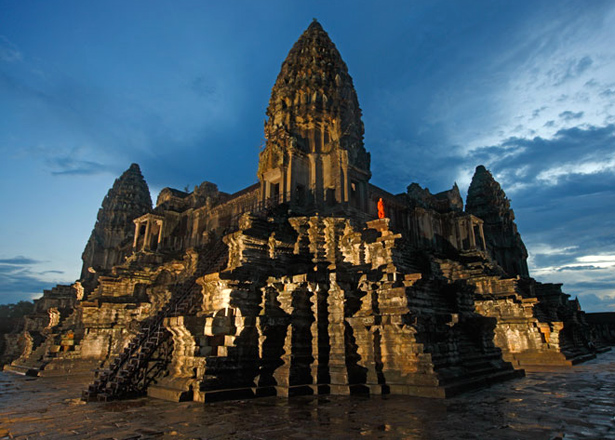 The majestic temples of Angkor

The Khmer Empire dominated the Southeast Asian region from the 9 to 13th century, ruling what is today Thailand, Laos and Vietnam. The array of temples were constructed by the various kings during their reign in honor of Hinduism. However, as the religion of Buddhism swept through the region the temples transitioned with faces of the Buddha taking over. A real source of national pride, the symbol of Angkor Wat is everywhere you look in Cambodia – on the Cambodian flag, their money and, perhaps most importantly, on their beer! Favorites of the day were the infamous Angkor Wat, of course, but in tight competition with Ta Phrom with its battle against the trees taking over its structure, as well as Bayon with its 216 smiling Buddha faces staring off into each cardinal direction.

Other than border scams, you must also be careful of robbery. Sadly, one of our participants was robbed but thankfully, all the sneaky culprit managed to get was her beautiful purple scarf. He was about two feet tall, hairy, grey and had a long tail. We’ve said it before, and we will say it again: monkeys are not your friends! 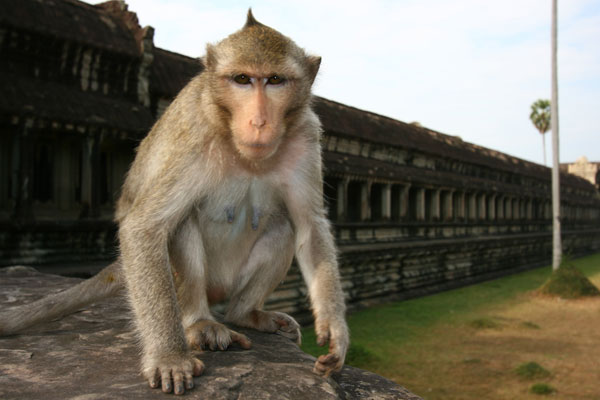 Beware the monkeys of Angkor

Despite getting up at sunrise, the group was ready to get up and go for a night on the town of Siem Reap! A BBQ at the rooftop beach bar, followed by checking out the evening night life kept us busy all night and sleeping in the next morning. A day by the pool side was well deserved.

A wander through the artistically bustling night markets and alley ways, topped off with ice cream and massages put us to sleep nice and early. Leaving the next morning for Phnom Penh, the capital of Cambodia, we simply prayed for an air conditioned bus that would not break down on our way there.

Well, the bus didn’t break down and it was a vast improvement from the last groups’ experience, but the blowing of hot air is not quite the same as cold air. But hey, were in Cambodia!

Just in time to catch the last night of Phnom Penh’s weekend market, we dropped our bags and took an evening stroll through the downtown core. Aerobics in the park, Khmer music, vendors, balloons, flags – a walk along the riverside on a Sunday evening feels like a festival every time. Dining on local cuisine in a Khmer picnic style, we were introduced to the city…

After our walking tour of Phnom Penh we were ready for our movie night at the Flicks, a community movie house full of cushions and an old school popcorn machine. Taking over the whole theater, we watched the award winning 1984 film, The Killing Fields, which covers the Khmer Rouge regime. If you haven’t seen it, watch it! We left the film house with many questions and a new found understanding of what Cambodia and its warm people have suffered over the years.

The group is presently visiting the S21 prison, an infamous torture prison during the time of the ruthless Khmer Rouge and the killing fields themselves. A solemn day to be sure, but pivotal in understanding Cambodia today…