Posted at 16:28h in Southeast Asia by Operation Groundswell

After an overnight bus, we have just arrived in Bangkok in the darkness of 5 a.m.! We are en route to the Cambodian border for the next leg of our journey that will take place in  Angkor Wat, then to Phnom Penh!

There’s no rest for this group! Chiang Mai was supposed to be a mellow, down time in contrast to our hardcore week in the hill tribes. A cultural hub in Thailand, Chiang Mai offers all sorts of classes and retreats. Everyone kept themselves busy learning the fine arts of Thai massages and culinary delights as well as segway tours around the city.

Craving another hardcore experience, the crew made their way to a Muay Thai stadium to catch a few fights! People come from all over the world to Thailand to train and compete in the art of Muay Thai, a form of boxing mixed with martial arts…but my description is really not doing the sport justice. My apologies to all the fighters out there. Uncertain whether the fights were rigged as a tourist trap, the group was skeptical until blood was shed and a knock out followed!

Chiang Mai was once the capital city of Siam, way back in the day. There are temples all over the map dotting the inner and outer walls of the once walled kingdom. To this day, Buddhism thrives in this ancient city and meditation retreats, monasteries, and Buddhist conferences are a common occurrence. The robes of monks from all over South East Asia – Myanmar, Laos, Cambodia, Thailand – can be found wandering the streets at all times of the day.

With Buddhism being the predominant religion in this part of the world, we knew we needed to learn a thing or two. And who better to learn from than the monks? Our first night in Chiang Mai, we attended a monk chat. Once scared to smile or speak to monks in the street, we’ve been slowly learning more and more about this foreign, yet incredibly inclusive religion. Reincarnation, concepts of soul and sin, Gotama, Mara, daily routines, rules and their favorite types of music were some of the topics we . Yet again, Justin Bieber somehow made the list, but only because he helps the monks improve their English… 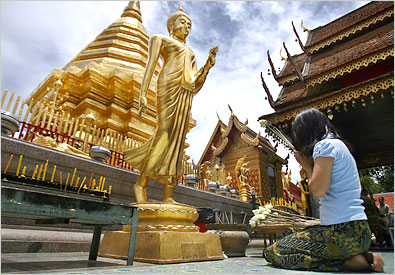 A visit to Doi Suithep and Wat Umong sealed the deal. Doi Suithep is a beautifully ornate temple located on the top of a mountain. From a far, it appears to be floating in the clouds with only its golden pagoda piercing through the sky. We crawled up the mountain, uncertain our truck would make it, until we were dropped at the foot of the steep case protected by naga heads. Monks filled the temples in meditation and debate, while Thai people made offerings. Wat Umong is a much more serene and organic experience. Tucked away in the forest, we were the only visitors wandering around the ancient underground tunnels used for meditation. Moss covers the stone work of the temples, while roosters, cats and dogs wander around the grounds relaxed and free. Monks heading to chanting passed by us. Then suddenly the grounds were filled with the deep, soulful sounds of chants from the temple.

With a ten hour bus ride ahead of us, we are hoping some of our Buddhist lessons of patience and enjoying the present moment will stick.