Posted at 15:52h in South America by Operation Groundswell

We last left you after New Years in Arequipa, as we were about to begin our volunteer project. Now here we are, just over a week later but what seems like a lifetime.

Bright and early on January 2nd, we started our volunteer project in Los Olivos, a growing community on the outskirts of the city. We rolled out of bed and headed over to the “Traveler not Tourist” office in Arequipa to meet Roxana, our point person for the project we would be working on with this local NGO. She gave us the run down on what TNT does in Arequipa and how we discovered this project. Los Olivos is new territory for TNT, who works in neighbouring communities. When we originally spoke in September about the shorter amount of time we had, she mentioned Señor Luna, an elderly gentleman with a big heart who is active in the community, but without any family to help him out. With a wall of piled rocks and one room for he and his dogs, it was an opportunity for us to lend a hand renovating and improving his living space before the rainy season. 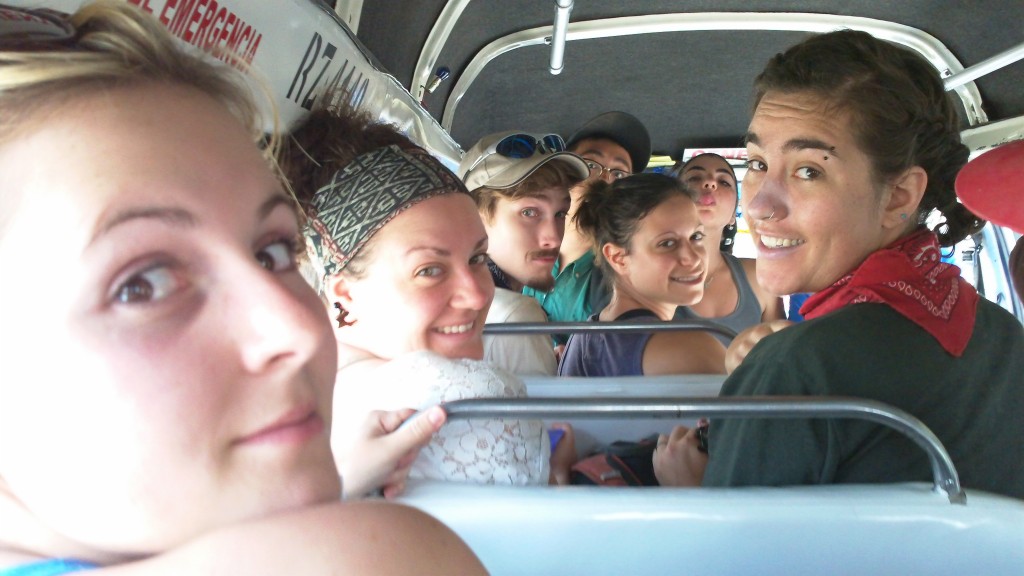 Our combi ride to Los Olivos

Like a herd of alpacas, we piled into a combi bound for the 30 minute drive up into the foothills to Los Olivos where we were introduced to Señor Luna, Rene who was our Maestro and resident construction specialist for the project, and Rene’s 10 year old son Misael who would be augmenting our vocabularies with words like “tierra” (dirt), “lampa” (shovel), and “gorra” (hat). For lunch each day, Roxana’s mother, Susana made us delicious home cooked meals, which we ate with relish and lots of aji! Before lunch that first day, we had dismantled the entire rock wall that was destined to become cement, and after lunch, we dug deep trenches in their place that would allow us to build  strong, stable walls.

On the second day, we started the hard work of filling in our trenches with cement. Man oh man, did we work for our dinner that day! We also met the rest of the troops– Misael’s younger sister Daniela, his friend Bill, and Bill”s little sister Jacki, as well as some friends of Rene who helped us pour the cement into the trenches. Most notable among those friends was Paulo, who had a wicked run when equipped with the wheelbarrow! We learned to GET.OUT.OF.THE.WAY. when it was his turn with the cement. On the third day, we finished filling on our trenches and erected the first layer of the wall– the “solera”! It was hard work, but great to see the people from Señor Luna’s community come to help out as well! 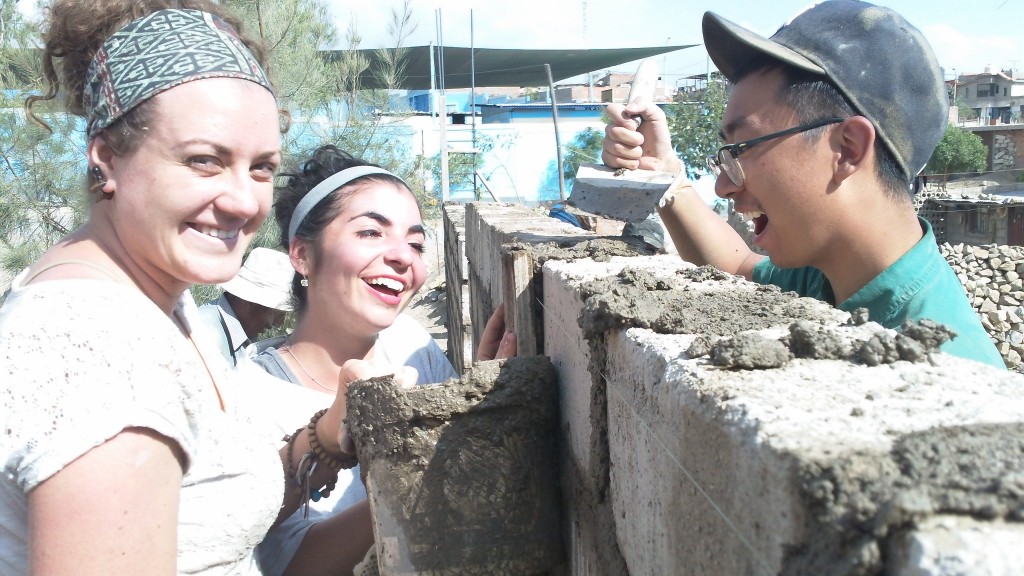 Sarah, Sophie, and Dom cementing the wall on the last day

The following day was a Saturday, the day of rest for Adventists (Maestro and Señor Luna) so we took that day to hit the main market of Arequipa– San Camilo–to buy shoes and school supplies for another family connected to TNT. Using our best bargaining skills and growing Spanish vocabularies, we got the best backpacks and notebooks we could find, as well as a soccer ball and volleyball for the kids’ after-school edification. 😉 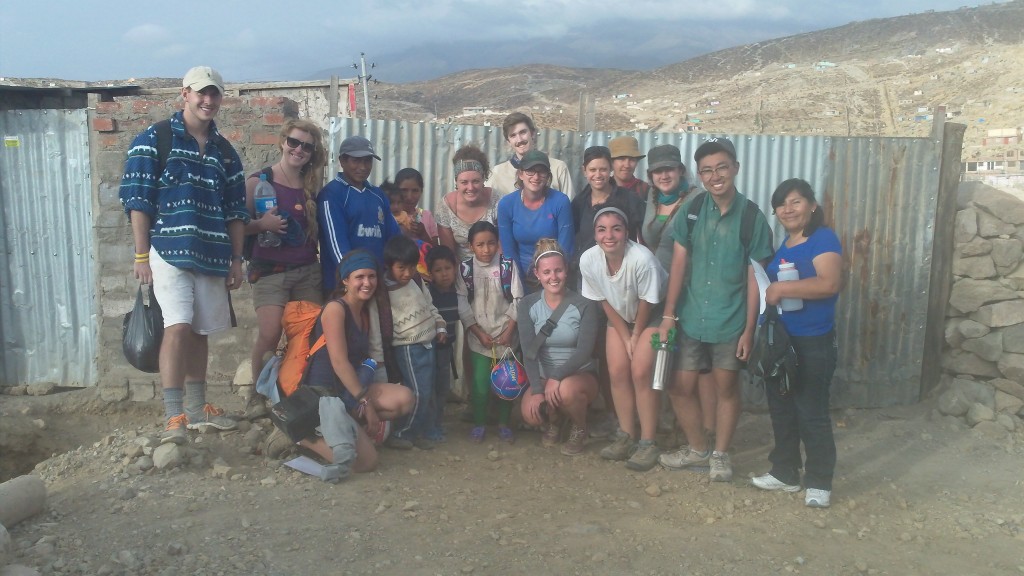 Sunday was our final day on the construction site. We lunched early and labored hard, morning and afternoon, to raise a wall that even the tallest among us could not reach at the end of the day. Pleased with our progress, we went to meet the other family and deliver the school supplies. We met the mother and father, baby daughter, two sons and eldest daughter. The father expressed his gratitude for the school supplies and the family embraced us both figuratively and literally.

After that, we went back to Sr. Lunas house to say goodbye. We stood together in a circle as Sr. Luna spoke a prayer, feeling grateful for the unlikely community that we formed in that moment and in those past few days. While we are separated in our normal lives by thousands of miles and the limitations of language, Sr. Lunas words tied us together, as a community, in his words, “under God”. And whether or not we shared his religious beliefs, we all shared that sense of connection. 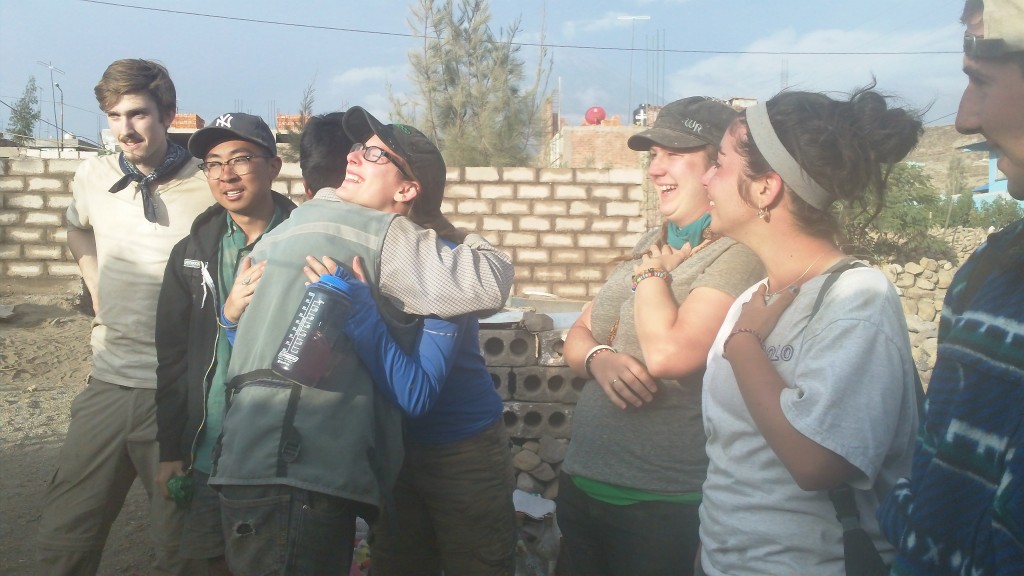 It’s also not that simple. As I write this, I am wondering how or if we can relate such moments in ways that capture the humanity and the power of the moment, of those relationships, without falling into a rhetoric of saviorism, or sounding overly sentimental and trite. Truthfully, I’m not convinced that we can. Saviorism and sentimentalism does typify the larger conversation around volunteering abroad, at least in the Global North. So it is, after all, the context of our trip. I’m also not convinced this means we should never talk or write about what happened.

On the last day at the construction site, we were unable to deny that we were, in fact, transformed by each other. We also talked about the global power dynamics and oppression that make volunteering abroad, outside our immediate communities politically salient. Those systems of oppression are the very things that we are working against, even as they set the stage for us to be welcomed in Los Olivos.

And what to the argument that telling these stories, and running programs like ours do in fact commodify those relationships and Sr. Lunas prayer? There is truth in that, undeniably. And THAT is the conflict, the contradiction, the uncomfortable complexity that we are trying to lean into and stay curious about and open to, rather than resolve it or trade it in for some simpler, more palatable fiction. We are not in all ways different, per se, from other trips abroad that combine traveling with volunteering, For instance, we cannot divorce ourselves from the larger narrative of saviorism that we talked about one evening in Arequipa. Sometimes, that truth is uncomfortable. But at OG, we know that exploring that discomfort rather than shying away from it, will help us grow.

We are leaving here with sunburns, calluses new friends, memories and many questions. We know this is not the end, but an amazing and vital beginning. Taking what we’ve learned in this chapter into the next one, we are excited to see what’s in store for us next!!

From Lima on our last day here, trip leaders are missing the troops like a gringo at home misses sublimes!!!!!!! 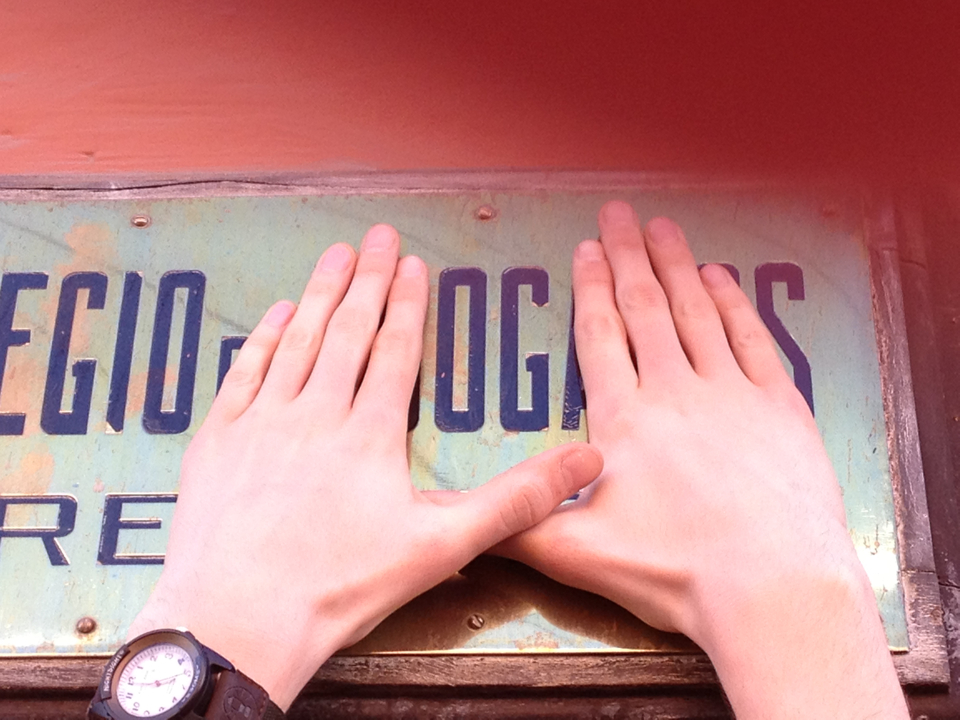