12 Aug Chickens and Tractors and Wells, Oh My!

Posted at 12:29h in Middle East by Operation Groundswell

The week has been a whirlwind for OG Middle East. Monday thru Thursday passed in a haze of pickaxes and flying dirt as we continued to help Ishmael dig his cistern in the south Hebron hills. In those four days, we learned how to work together as a well-oiled machine to dig out the maximum amount of dirt possible in the least amount of time. Whether you were pickaxing in the cave, shoveling dirt, or passing buckets in the assembly line, every person on our team pulled their weight to make Ishmael’s cave many times the size it was when we first saw it on Sunday. But don’t think we didn’t have fun doing it – OG Middle East can sing Disney songs so loudly that even the army has to stop by to see what’s up. And of course you could always count on Ishmael’s children to drop by once a day with delicious tea and a reminder that they are all stronger and better diggers than all of us.

This week also had some very special highlights (and lowlights) for all of us. On Wednesday afternoon, Ishmael stopped our work an hour early and brought us to his village about 10 minutes walk away. He and his family let us relax in their home while they cooked an amazing feast of chicken, rice, and sheep soup for all of us. (We were going to have an actual sheep, but Daniel refused to slaughter it for us). We spent an amazing afternoon with them meeting some of Ishmael’s adorable children and eating the freshest chicken most of us had ever eaten. To top off the hospitality, Ishmael drove us back to our bus in the back of his tractor so we wouldn’t have to make the half hour hike. Even though some of us almost died when the tractor stalled going up the hill, the view from the tractor and exhilaration of racing across the hills made it a highlight for all of us.

The generosity of Ishmael wasn’t over yet, however, and Thursday afternoon he took us to some of his other houses, to meet some of his 33 children and 300 grandchildren. (Don’t worry, he has 4 wives.) They served us a delicious meal of pitas and hummus and veggies before sending us off from their homes. Even though we were there to do something for Ishmael and his family, in many ways he repaid us many times over with his hospitality, and we all left with, as one participant said, “hearts swelling too much to handle.” 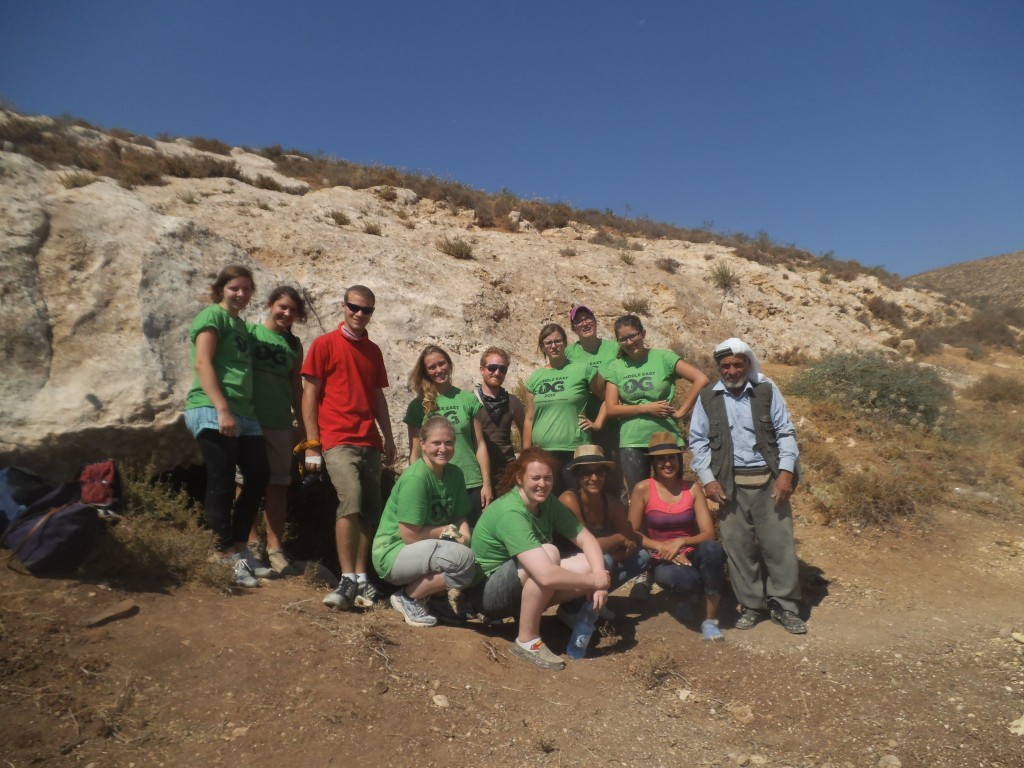 The day after we finished well digging, we took a day trip to Nablus in the West Bank. Little did we know we were going to have quite the educational experience. We could not get a bus straight to Nablus, so we took a taxi to Qalandia, the refugee camp that we visited a couple weeks ago, and navigated our way through the crowded and heavily policed parking lot to find a taxi that would take us to the city. When we reached our destination, we found that we were probably the only foreigners in the entire city, and if we wished to eat, we had to find a deserted alleyway to avoid being yelled at as it was ramadan. On our way home, we traveled through the Qalandia checkpoint, a crowded, long, and intimidating experience that left us all exhausted and with a new appreciation for the lives of Palestinians who must cross that checkpoint daily.

As we’re writing this, we are about to go to dinner to celebrate the end of our volunteer work and the beginning of our weeklong Independent Travel Time. Today, as we got ready to separate from each other and our apartment for the first time in four weeks, we had some time to reflect on all the experiences we have had volunteering in Jerusalem and the West Bank and learning about the current situation in Israel Palestine. We spent the morning at a park with each other discussing what we have learned about this nation, what surprised us, where we will go from here, and of course, the merits, or lack thereof, of the demise of sock-wearing in western culture.

After lunch we headed back over to the Rabbis for Human Rights for one last education session with our main man Yehiel, who helped us digest some of the things we have seen and the experiences we have had this past week and over our entire stay. We were able to ask him some lingering questions that we all had about where the conflict in Israel-Palestine is heading and what his views were on the success of his work here. As heavy as the conversation was at times, Yehiel made sure to leave us with some words of inspiration and optimism – that he has hope for the end of injustice in this region and a belief in the decency and goodness of people. We’ve been so lucky to work with such an inspiring and dedicated organization and to interact with so many interesting and passionate people, and there is no doubt that as we head out to travel and eventually return home, we will take some of their spirit with us.

– Written by participants Rebecca and Lucy