Posted at 02:40h in Middle East by Operation Groundswell

Monday was Tel Aviv day! The group met first with Pardes in the Tel Aviv Central Bus Station – a physical manifestation of the social class order and treatment in Tel Aviv. Pardes is a group that works with young adults like us to educate them on the rising disparity in Israel. Our guide, Gal, took us around the bus station, the foreign worker’s neighbourhood, a park where refugees are literally camping out until the Israeli government decides what they want to do with them, and some other ‘rough’ neighbourhoods. On July 31st (Tuesday) the taxes on everyday items were raised, creating even greater economic inequality in Israel.

After we said goodbye to Pardes we had a few hours to spend in the city – some of us jutted off right to the beach while others decided to shlep around the city. Afterwards, we met with another progressive organization called the Association for Civil Rights in Israel (ACRI) and their amazing International Relations Rep Libby. We heard some awesome things about what the organization does to fight for civil rights in Isreal and the Palestinian territories. Some specific examples were given to us during a game of agree/disagree in which we all learned a little bit more about civil rights in Israel and our different opinions as a group of diverse people. Thank you ACRI!

On Tuesday we visited the offices of Rabbis for Human Rights to learn more about our well digging/restoring project. Two organizations, Taauish and EWASH, visited to give us more information about the location of our project and the issues of fresh water in Palestine, respectively. We also met with Jonathan, a rabbi with Rabbis for Human Rights who will be leading the well digging/restoring project, and a fellow Canadian.

On Wednesday we walked 30km in the desert – BAM! Our “spirit guide” Tsouli – an amazing geographer and hiking BEAST – planned the hike for us awhile ago and we were all pumped to finally get to strap on our walking shoes on Wednesday afternoon. Let me start by saying that I, personally and vaguely, remember Tsouli describing the hike as “downhill” and maybe even “easy”. It was not.

We started the trek in a settlement community called Taqoa, where we met with the son of a very famous rabbi, Tsouri, who is credited with starting the Peace Settlers movement. He spoke with us about his life as a settler in the occupied territories and his beliefs and hopes for the future. He explained to us that he tries, and the movement tries, to build relationships with the Arab towns and villages to create peace amongst them based on their shared belief in the spiritual significance of the land. It was amazing to hear that in the past week, the settlement Taqoa and the Arab village Taqoa broke their fasts; Ramadan for the Arabs and Ti Shabbaav for the Settlers, together.

Then we began our hike through the Judean desert. We started the hike off in silence to allow ourselves the chance to really take in and contemplate the beauty around us. The full moon was so bright, we didn’t even have to pull out our flashlights. After the silence was done we took in the sights together, joking around and hearing our “spirit guide” Tsouli describe the significance of the places we were seeing; caves where ancient scrolls related to the Torah have been found, caves from the first monasteries, and camel bones. 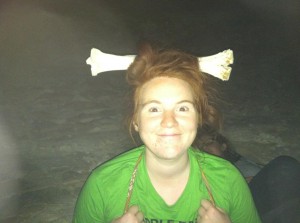 Gillian as Pebbles with a camel bone

At one point we were startled by a low, loud “growling” noise not too far ahead of us. We were quickly relieved to see that what had startled us was not a furious wild animal but a group of 5 wandering camels. It was an excellent sight to behold! Fun and games turned to serious work when our group took a “little” longer than expected to arrive at our destination and we got caught under the blazing hot Middle East sun. We forged ahead like warriors and finally made it to the Dead Sea. 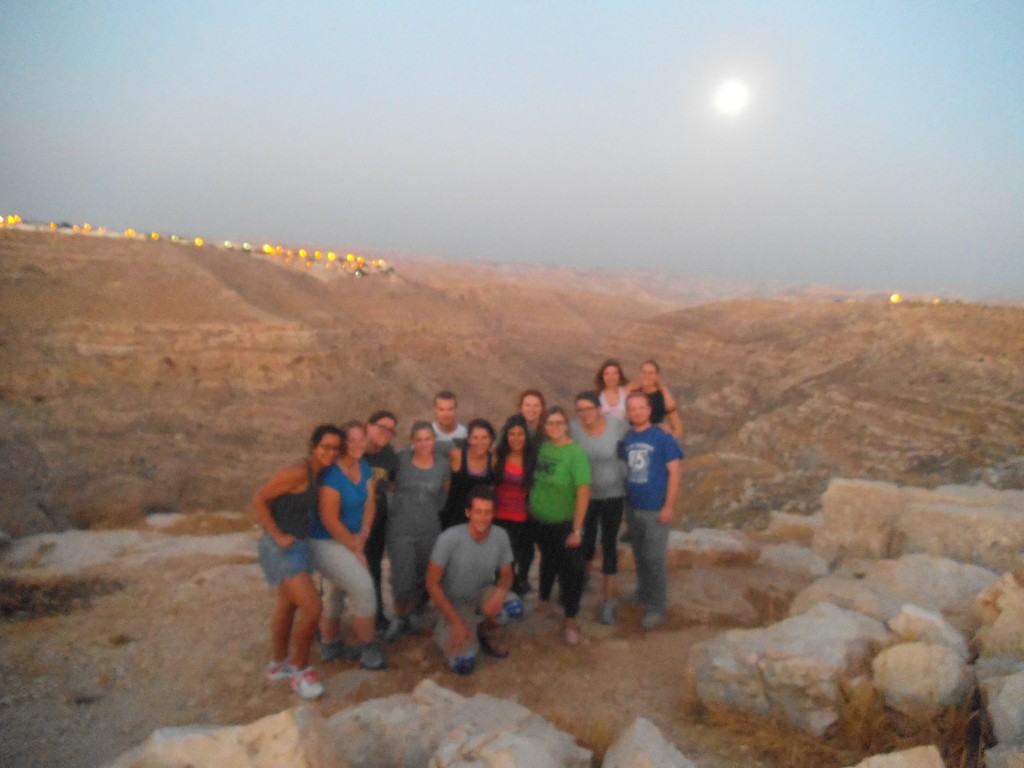 Hiking through the Judean desert

We have to end this post with some bad news. For the time being the Israeli military has declared Suseya a “Closed Military Zone”. For us this means we will not be able to reach the South Hebron in order to help reconstruct the wells. The OG mates are a mix of sad, confused, and hopeful to find another way we can help.

So for now the Judean Desert Warriors (Middle East OGers) bid you Shalom.