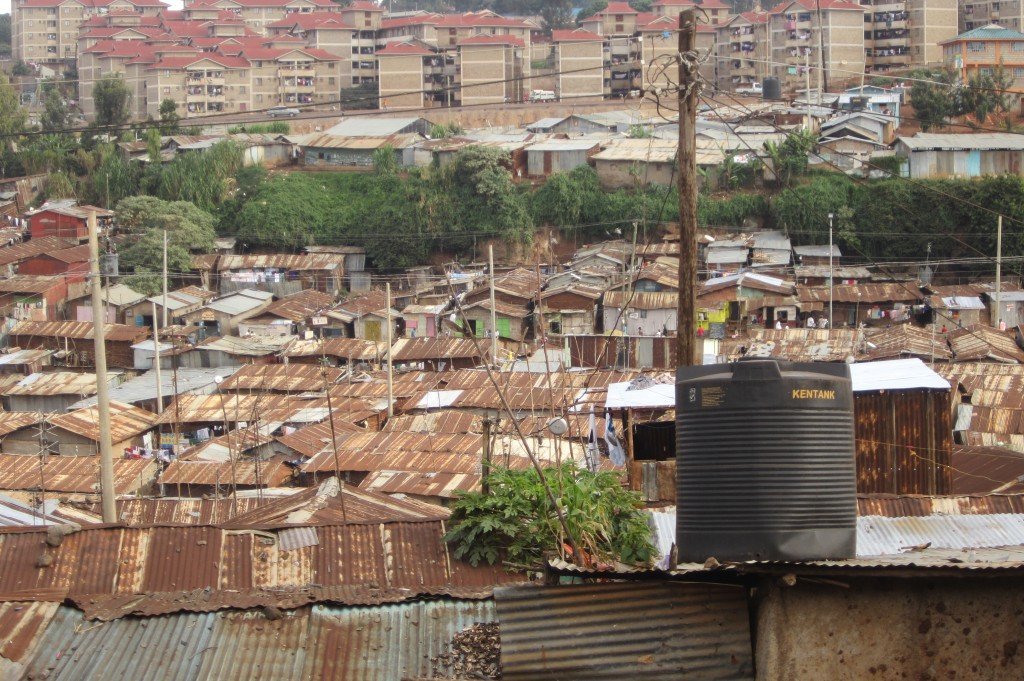 Posted at 19:02h in East Africa by Operation Groundswell

It’s been a whirlwind week for the East Africa: Youth in Action team! We’ve spent the past few days moving through Nairobi, Naivasha, and now we’ve finally nested in Kisumu.

On Sunday afternoon, after lunch and still battling jet lag, we took a matatu out to Kibera, an informal slum settlement that houses between 200,000 to 1,000,000 people and has developed a form of self-governance over the years. It’s impossible to estimate how many people actually live there since people are constantly coming and going; there are no permanent houses, formal streets or addresses.

We weren’t sure what to expect when entering the slum. Though we’d heard about Kibera through documentaries and from others, nothing compared to experiencing it first hand. The houses are small and often double as a shop in the front. Garbage piles up in the streets, waiting for its turn to be burned. Sanitation is one of the biggest issues here, as would be expected in a community receiving so little help from the government. This issue is often highlighted in the infomercials produced by various NGOs. What they don’t show you, however, is the number of small businesses and development opportunities that have emerged within the community. Almost everything that can be found in the western world can be found here too. Banks, pharmacies, kitchen supplies, beauty salons, shoe stores…you name it, they have it.

The children ran after us and we heard a chorus of “Mzungu” (which basically means white person) “How are you? How are you?”, as we walked the streets. While the children were excited and fascinated with us, the adults simply stared on. They are used to foreigners observing and taking pictures of their living conditions.

After walking through the streets of Kibera, we ended up at the Masaai Mbili art studio.

Massai Mbili became well known for promoting peace through art in their community after the 2007 post-election violence. We had the chance to chat with Ashif, one of the founding members of the group, who discussed his experience living within Kibera, the importance of art in the community, and his views on the roles of NGOs in the slums. His response to the latter was blunt, but quite accurate. 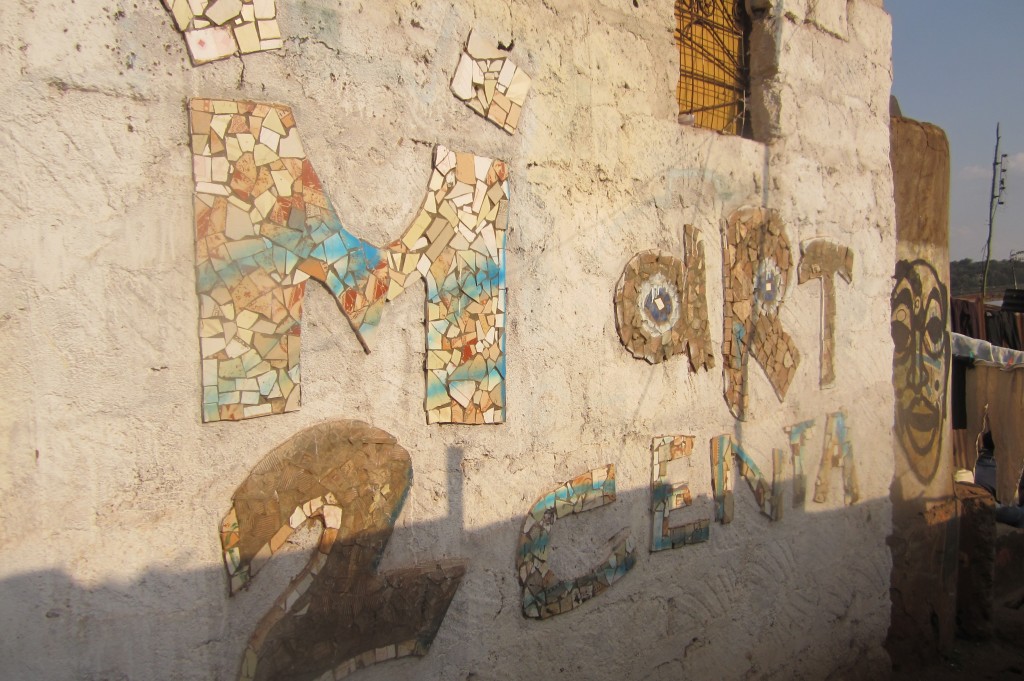 You cannot claim to understand a person, their experiences, and their needs without attempting to connect with them. NGOs, especially international ones, mostly enter communities prepared to play the role of “savior” and jump into action without first considering the people behind the poverty. If we “outsiders” want to achieve anything, we need to approach the situation as equals. Making the effort to communicate and getting to know the individuals and their stories is critical to developing an action plan, because building a level of trust and understanding is the key to fostering growth. 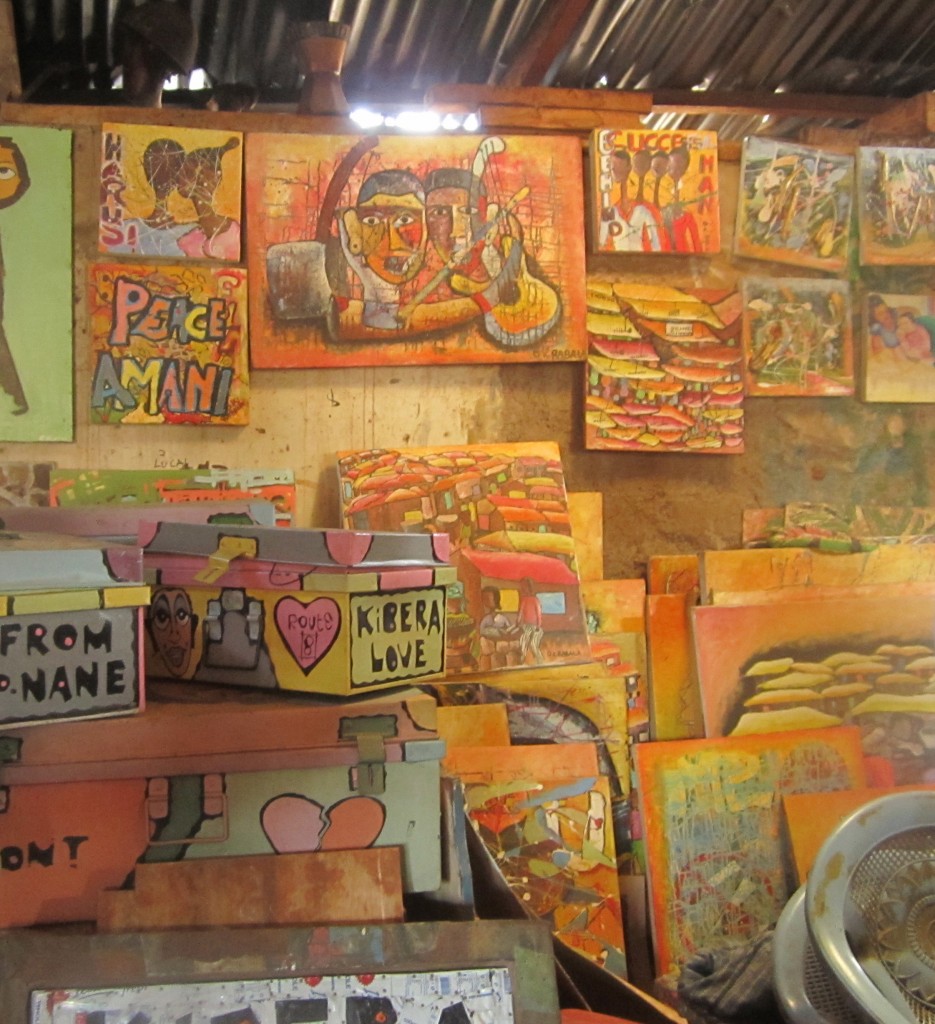 Ashif pointed out to us that the reason so many NGOs and volunteer initiatives fail to see long-term results is because of that (perhaps unconscious) savior mentality. Instead of working with the people and their existing resources to bring about change, they come into communities with their own skills and people, do some great work, and then leave, proud of the work they’ve done. However, these groups have failed to involve community members in the work, so the locals are left somewhat helpless upon their departure, and the work that these groups have done goes to waste. Furthermore, the organizations may not have accurately identified the key needs of the people, because they have failed to spend time getting to know the people of the community and understand the key gaps in the economy, education system, etc.

After hearing about Ashif and his success with Masaai Mbili, we asked him why he has stayed in the slum. He has been successful with his work and has even had shows in parts of Europe. He told us the answer is quite simple. Every day he wakes up knowing that he has the privilege of spending the day doing what he loves, so he sees no reason to leave. There is a very strong sense of community in the slum; people leave their doors unlocked and curtains open during the day when they are not home. This goes to show that a slum is not a place that people need saving from, but it is a place abundant with opportunities to partner with the people who live there in order to share resources and ideas to help their community and their home. 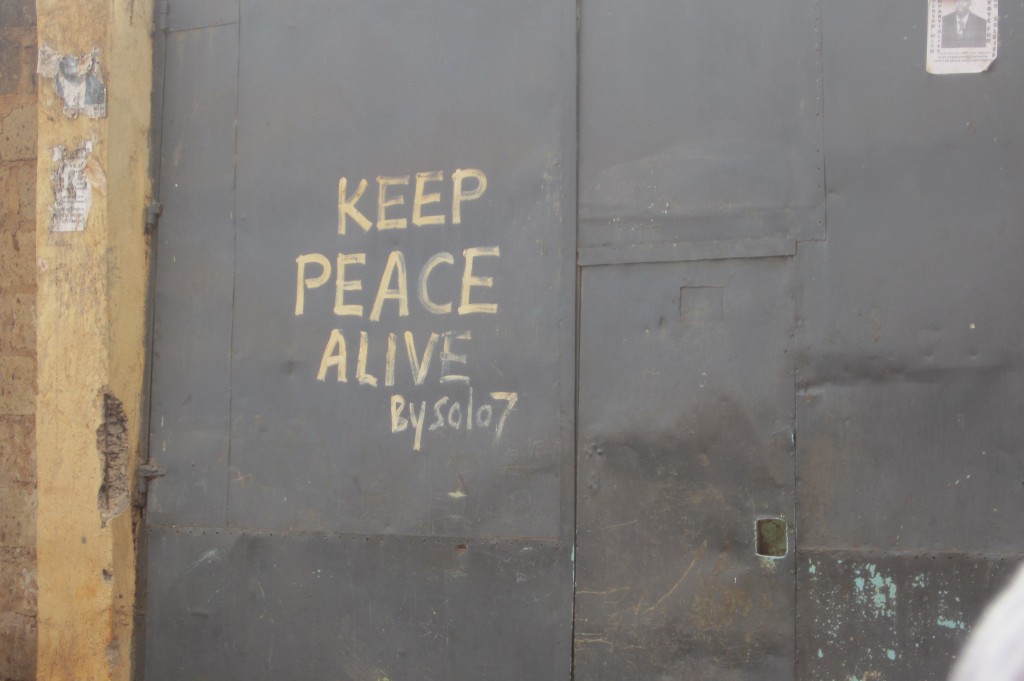 Operation Groundswell has identified this gap in the international volunteering experience and has designed its programming to foster open lines of communication, address key issues within communities, and help ensure sustainable change and growth. Instead of entering communities and introducing new programs, OG works with existing organizations on initiatives that provide the time and knowledge of their volunteers. This gives locals the people power they may need. This model ensures that the programs are self-sustaining, allowing locals to continue to do meaningful work long after the volunteers depart.

Within our first week, we’ve realized that OG programming is focused on educating before jumping into action. We have spent the past few days learning about the Kenyan culture, language, and about the economic and political realities. Speaking with people such as Ashif has helped broaden our perspectives in many ways, and conversations such as these will shape our experience going forward as we begin working with local initiatives.