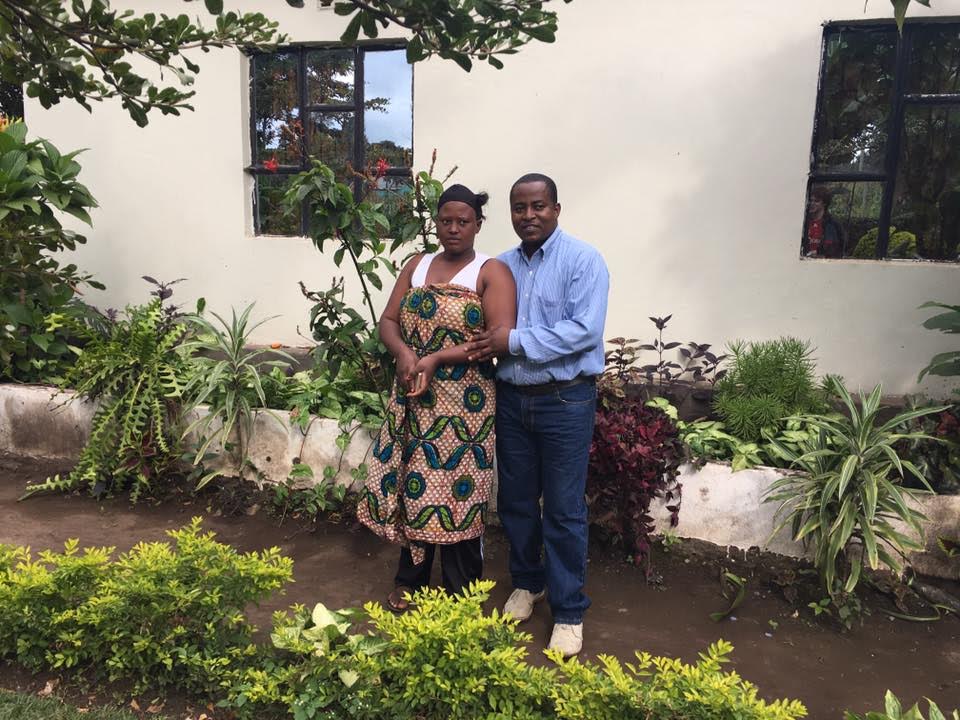 Posted at 21:29h in East Africa by Anna Cunningham

Hunter and Olivia each wrote about their unique experiences with gender roles during their homestays in Ngongongare, from opposite sides of the spectrum. Here they’ve reflected on how these experiences affected them, and what they’ve taken away.

The forty days I spent backpacking through Tanzania with Operation Groundswell provided me with a radically broadened awareness of my own privilege as a white, American male. Specifically in regards to gender, my privileged status as a man was made most evident during my experiences in the village of Ngongongare, where there was a predominant societal implementation of “traditional” gender roles.

During our stay in Ngongongare, we would spend the day volunteering with Jifundishe, a local non-government organization partnered with Operation Groundswell, and spend the nights participating in separated homestays with no more than one or two group members occupying a single home. Our OG team was composed of thirteen members, eleven females and two males including myself.

When we first arrived to Ngongongare, we were informed that the villagers had previously held discussions to determine how we would be split up into our homes, as some of the residents were specifically opposed to housing the two males. JP (the other male) and I were assigned to a single household, and the rest of our group was divided among different homes. 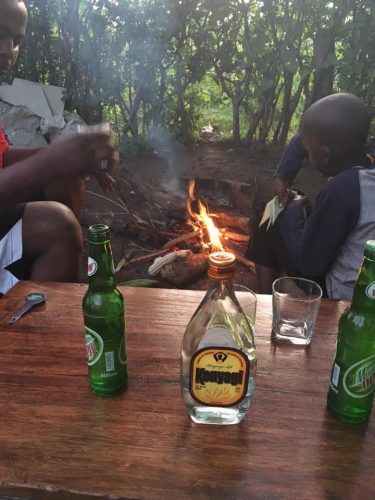 In preparation for these homestays, we had been told that we would spend our time assisting with household chores such as cooking, cleaning, and laundry. Most of our group spent much of their time doing such tasks during their homestays; however, JP and I did not.

Every day after we finished working with Jifundishe, the father of our household would take us to the local bars. We would drink and play cards with our house father and a few of his other male friends until his wife would call him to inform him that dinner was prepared.

His friends would join us for dinner, and his wife would clean up afterwards. Although JP and I would often offer to help with the preparation and clean-up, we were always told to not worry about it and would continue conversing or playing card games instead. In fact, the only chore that JP and I were required to do for the duration of our homestay was to clean the dishes each morning from the previous supper. 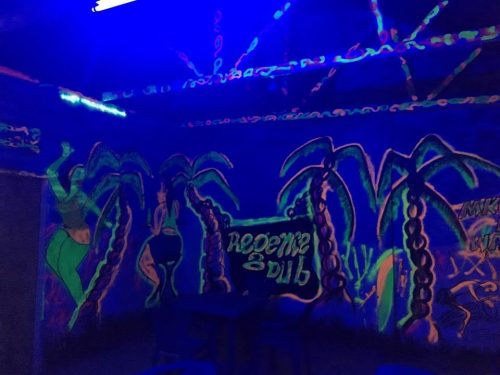 We were able to observe how different our experience was from the experiences of the girls when we visited a neighboring home one night. Many of the men in the village were having a meeting at the home where Olivia, another OG member, was staying. JP and I were taken to this meeting and were instructed to sit with the rest of the men.

Meanwhile, Olivia was required to serve all the men, including JP and myself.  She washed our hands and served us food and drink. I’m assuming that after the meeting concluded, she was responsible for cleaning everything up; JP and I were taken to a bar after the meeting.

These experiences provided us with some fun stories and good laughs, but they also allowed me to recognize just how privileged I am not only as a man, but as a man living in America. Gender equality is still something being actively fought for in America, but the inequality we currently experience is not comparable to the gender inequality in many other places around the world. Many women still find themselves obligated to submit to traditional gender roles such as that of the subservient homemaker.

This realization has made me much more grateful for the fact that the men and women in North America generally have the opportunities to pursue more than roles placed on them solely because of their gender. Although there is still much work to be done, the progress that has been made towards gender equality in the West should not be underappreciated in the slightest, because there are so many other people around the world who have never and will never experience such opportunities.

Retrospectively, as Hunter introduced, one day out of my forty in Tanzania starkly stands out in my mind: the day I truly became a dada (Swahili for sister) and accepted all the responsibilities attached that far exceeded my Westernized understanding.

5:00 pm:
My homestay father picked me up on the piki piki (Swahili for motorbike) at the end of the day, as usual. I arrived home after volunteering with Jifundishe to find my mama and fellow dada, Noella, tending to the animals on their farm similar to the previous two days of my homestay experience.

Determined to make the most out of one of my last days with my family, I eagerly offered to help. Ecstatic to work by my side and to show me her process, Mama put me to work milking the cows. This was followed by chasing chickens out of their coop to check for eggs that may have been overlooked that morning. Shortly after, neighbors appeared to buy the milk and I helped mama strain the milk fat litre by litre for 500 Tanzanian shillings each (roughly 25 cents USD). 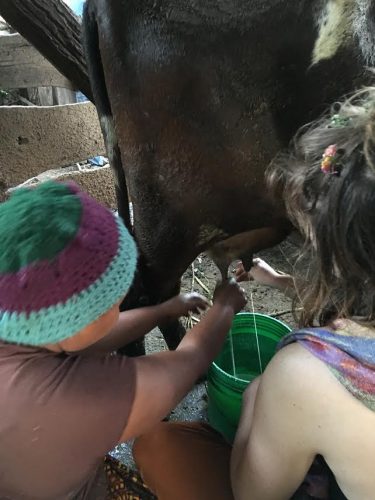 6:15 pm:
After most transactions were complete, Mama relocated me to the backyard where she deemed my energies more useful roasting peanuts, which I figured were intended to be snacks for later. This process proved way more intricate than I had imagined it to be, and it took roughly 2 hours to roast 3 pounds of peanuts. My host siblings, Noella, Calvin, and Jr., attentively kept me company as we laughed and took photos while sneaking peanuts from the skillet for ourselves.

8:30 pm:
After the peanuts were roasted, Mama suggested that the children and I pay a visit to their aunt, as she had just given birth the day before and it was customary to bring new mothers fresh milk and good blessings. We headed over through town to her home.

9:10 pm:
Upon arrival, we were greeted at the gate by a flurry of guard dogs, and nephews and nieces. We were ushered into a home with a curtain door, into a living room where the family gathered around a TV displaying a Swahili-dubbed version of a Bruce Lee movie. The new mother was a room over and she eagerly beckoned me through the doorway.

As I entered the bedroom, I engaged in conversation with her in my minimal Swahili. She invited me closer to the bed to see her newborn baby boy swaddled in a kanga (a traditional piece of African cloth) patterned brightly with swirling black, white, blue, and orange designs.

I was taken aback by the familiarity of the kanga, as it was the same pattern that I had purchased in the market a few weeks before for myself. The sleeping baby woke without crying and held my finger through the mosquito net that the bed was shrouded in. He may not have cried, but I would be lying if I said I didn’t shed a few tears in that moment. 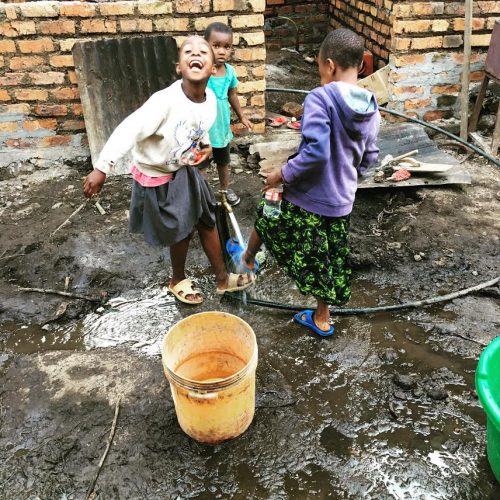 10:00 pm:
After arriving back home, Mama approached me at the gate of the house and asked me if I would mind serving the gathering of men inside the living room with the help of my homestay sister as a dada would. Interested in what this would entail and grateful for a future story to tell, I eagerly said yes and began undertaking my responsibilities in the kitchen.

10:20 pm:
Shawled in a modest scarf Mama had drenched over my shoulders, I entered the living room and recited a Christian prayer in Swahili that she had taught me in the kitchen. The meeting taking place was discussing a memorial service for my family’s grandfather, who had passed away three months prior. I was to pray for his memory as well as thank all who attended the meeting.

Next, with a wash basin full of water that we had boiled, I was to go around the room and wash each of the 22 men’s hands, starting with my homestay baba. The 22 men included two of my friends from OG, Hunter and JP. It was an unusual and humorous situation to find myself washing and serving two of my peers. After this was complete, I distributed the peanuts we had roasted earlier. I had not known at the time that the peanuts were going to be for a gathering of men in my living room.

Then, my fellow dadas Zawadi and Noella distributed tea cups for the chai we had prepared. The chai was one part brewed black tea and one part milk from the cows we had prepared earlier. It was strained of milk fat and mixed together in large thermoses for pouring. I filled up each cup individually and was then instructed to sit in a nearby chair in case anyone from the meeting needed anything. 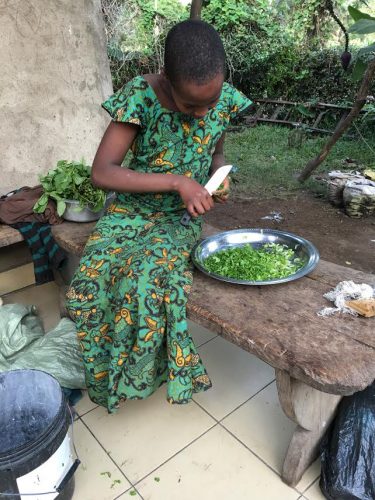 11:10 pm:
After the meeting concluded, the men started saying their goodbyes and dissipating from the room, complimenting my dada skills upon their exit and referring to me as the “perfect dada.” Once they left, Zawadi, Noella, and I had to sweep out the peanut shells that the men had discarded on the floor as well as wash all the teacups and bowls. When this was complete, we were finally able to focus on making dinner.

12:30 am:
By the time all the cleaning and food preparation was complete, we sat together to enjoy a modest meal of beans and ugali (a flour and water composition boiled into a stiff porridge). We soon retired to bed as Zawadi, Mama, and Noella had to again start their days tomorrow at 4:30am with tasks around the farm.

This was by far the hardest eight hours of my OG Tanzania trip, but also the most rewarding. The unique experience of seeing how much (although very much appreciated, in my experience, by the men of my family) women go through in villages such as Umoja made me reevaluate the potential I am provided and the opportunities present in my own life with renewed gratitude.

On this day, I learned that women are magic in their own right and in their own lives, be it by bringing beautiful, swaddled bunches of light and serenity into the world, or by never complaining about eating past midnight. All of their actions are the direct result of taking absolute care of their families, a task they take more pride in than anything.

Seeing firsthand how these women bind together and bend for the betterment of their children and their husbands is a memory I will cherish always and keep close as I continue to advocate for women’s rights at home and across the world.