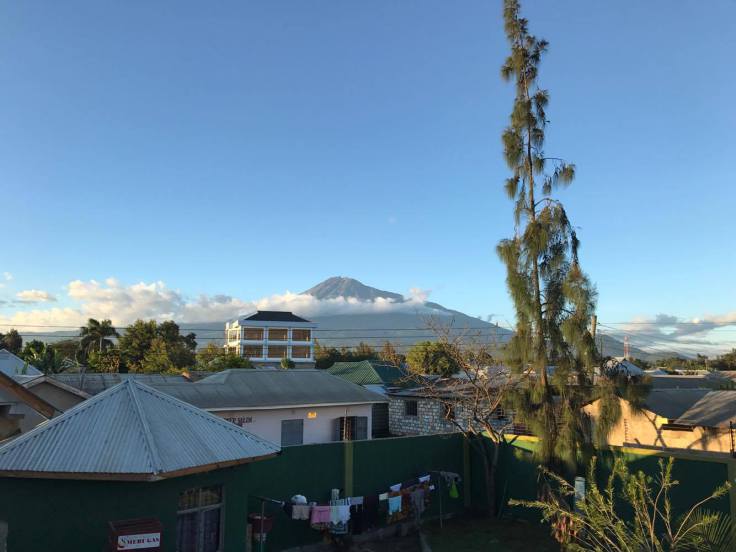 Posted at 19:16h in East Africa by Anna Cunningham

Greetings from Arusha, Tanzania! So much has happened in the last few days – a snake farm, dalla dalla rides, street haggling, trying custard apple – I don’t even know where to start! Pole pole! (“Slow down!” in Swahili.)

I guess I’ll start with the most magical thing that I just experienced on this trip. While I was looking at the breathtaking view of Mount Meru and Mount Kilimanjaro from the balcony of our hostel, a large group of colorfully dressed children skipped by and waved, “Hello! Hello!” with such energy and curiosity. My heart immediately went out to them so my friend Becca and I decided to leave the hostel and wander about the dirt streets of Arusha. As soon as we stepped out of the hostel we were swamped with a group of children eager to greet us.

Daudi, an eleven-year-old boy in a blue soccer jersey, quickly showed off his excellent English and before we knew it, we were following him and his friends into the narrow alleyway that leads to the local mosque. For the past three days that we’ve spent at the Greenhouse, our hostel, we have been woken up every day at 5 am by the daily prayer broadcast from a loudspeaker at the nearby mosque. Becca and I wanted to see the mosque in person.

So we did, and as soon as we reached the mosque, the evening prayer began. We were also immediately surrounded by more children playing soccer on the field next to the mosque, who posed for us as we took their pictures. 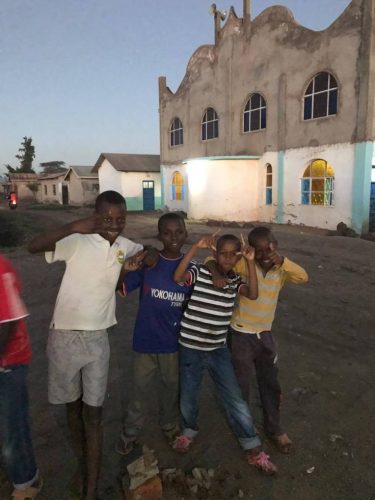 “Do you go to the mosque?” I asked Daudi.

He then led us to the church, where we were kindly allowed to enter (it was almost dark) and explore. We sat down in an outdoor prayer space, against the backdrop of Mount Meru in the sunset.

“What do you want to be when you grow up?” I asked Daudi, “Policeman? Teacher? Doctor?”

“I want to be a priest,” Daudi replied with conviction.

We introduced ourselves to the people that were coming out of a prayer service and they offered to sing for us. What a treat it was!

When the singing ended, the sun had also dipped its way below the horizon and it was time to leave the church. Daudi  said he lived close by and offered to show us his home.

Becca and I were eager to accept his offer as we had yet to visit a local home, so we followed him along the dirt road in the dark. We had to turn on the flashlights on our phones to avoid stepping into puddles, but the kids knew their way in the dark.

When we reached Daudi’s home we were greeted by his mother, who gave us warm hugs and kissed us twice on each cheek. We ducked our heads past the lines of laundry hanging in the small courtyard and stepped into their home.

I was surprised by how perfectly homey the space was. There was no TV in the living room, but the mother’s hand-sewn embroideries lined the backs of the couches. The mother called in her children and friends of her children to join us in the living room. She has three boys and three girls, and her oldest son is studying at the University of Dodoma – oh, was she a proud mother! 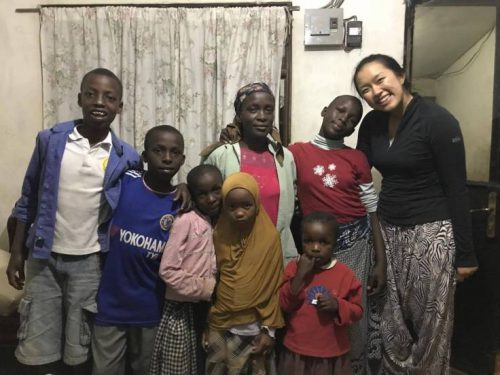 Daudi (second from left), with his mother and siblings, and me!

She went on to ask where Becca and I come from – Canada and China – and said she hopes to visit those countries someday. “God willing,” she laughed.

Pointing to her eyes and nose, she named different body parts in Swahili and we repeated after her. “I will cook you dinner! I will cook you duck!” she told us. We told her that we are leaving Arusha the next day. “When will you come back?” She asked.

Becca and I told her of our plans to return to Arusha in three weeks before going on our safari in Serengeti and Ngorongoro National Park. Her thirteen-year-old daughter wrote down their phone number for us and we promised to call when we’re back in Arusha.

“You are my daughters,” the mother said as she hugged us goodbye. I’m so glad that I stepped out of the gates of our hostel and into the warmth of this local Tanzanian family.