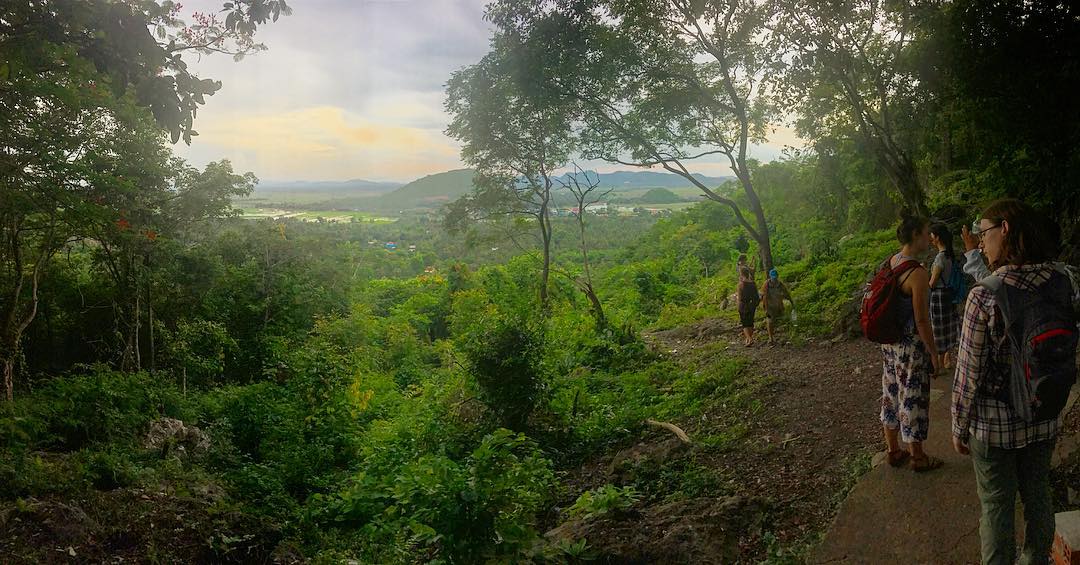 Posted at 18:29h in Southeast Asia by Anna Cunningham

One day my feathered nest was set ablaze
All the ways
In which it changed me
are tragically amazing.
Dazed,
I watched my life
ignited-
Not quite ready to
take flight yet.

Instinctively
I try to leave
my burning tree…
With no time to mourn
the burning leaves
and acorns that
he worked so hard
to make…
I attempt my escape
from the fiery grasp of this fate…
Fly or die now
with no time to
decide how…
I wish you could see
that if not for the fire
your branches would
still be called
home to
me.

Let me tell you a story about the most incredible man I’ve ever known. John Carroll, a New England-born nomad who met trouble under two conditions: the first being around every corner he turned, and the second, with a cheeky grin on his face.

How he ended up in Canada is still a mystery to us all. To this day, he tells anyone who asks that his venture to the Great White North was to meet me and my baby sister, Connie.

How lucky I am. The most amazing guy in the world also happens to be my father. 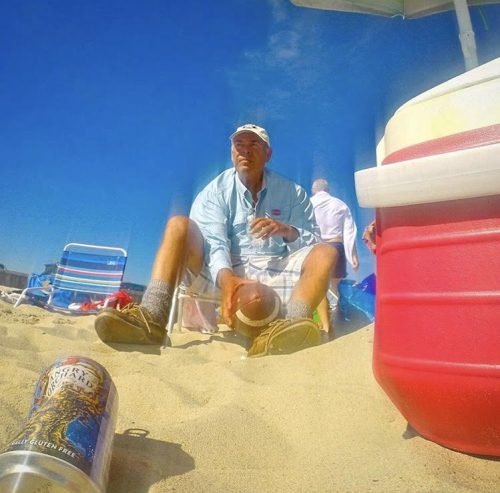 Growing up, Dad worked long days and longer nights to ensure financial security for my sister and I. Often times, it felt like he would grind out the year so he could spend a few weeks taking on the world with his two daughters.

Anywhere we went, lessons came with us. Yes, there were times we’d roll our eyes at the life lessons he’d share, like sleeping in a clothes donation box if we ever ended up without a roof over our heads…

We rolled our eyes not because it was a bad idea – in fact, he learned this particular lesson the hard way. We sneered because of our unfaltering faith that John Carroll would always have our backs. Dad would never let a damn thing happen to either of his girls, a truth synonymous with one of the greatest privileges I was prenatally gifted… a father like mine.

The more I throw myself into this wild blue pearl, the more I come to realize I’ve won a lottery of life. To deny it would be living a blissful kind of ignorance. Despite the inevitable guilt that comes with the understanding that I, Chelsea Carroll, am an incredibly privileged, white, Canadian woman, it feels more sincere to face the realities of my existence than to turn a blind eye to what it means to be born into the feathered nest of Canada. I also acknowledge that my father was one of the driving forces in maintaining my privileges. Admittedly, I was previously unaware of some, if not most, of them; like I said, it’s a blissful kind of ignorance, but that doesn’t always make it an intentional one.

One of my fondest childhood memories is walking the beach with my old man. We’d be hunting for mermaids coins – the beautiful, shiny, worn away bits of mussels and oysters. We would collect the few scraps of trash and fishing line washed up on the relatively pristine shores of Cape Cod, Massachusetts. He’d look at me from time to time and say, “Now, Chels,” in a serious tone, suggesting an Atticus Finch kinda moment, “You always leave a place in better shape than when you first arrived.” I’ve held that lesson in my heart since the first time I can recall him sharing it with me.

What exactly does it mean to leave a place in better shape than when you first arrived?

Operation Groundswell accepted me into their Animal Conservation program in Southeast Asia. It was an opportunity to get a university credit, to see a part of the world I’ve always dreamed of visiting, and to live out the lesson my father taught me many moons ago.

It wasn’t until I hit the ground running with my new OG family that I realized this lesson was more complex in its roots than simply picking up bits of beach trash with Dad.

I’ve learned so much since embarking on this journey just seven weeks ago. I’ve learned how to graft two species of mango trees to produce a more profitable crop in Cambodia. I’ve navigated spending every moment of every day with 13 other souls, all of whom I hadn’t known until that first day in Bangkok.

Among many other practical skills or life lessons I’ve discovered in these two months abroad, the most striking knowledge came to me through the project manager of Ockenden. Ockenden, one of OG’s partners in Sisophon, Cambodia, is a local organization that works with experienced farmers to educate other farmers who have been struggling with turning their land into usable, workable space.

We were a few days into our first volunteer project, helping transform a woman’s farm into more sustainable, profitable land. Part of our learning curve was a group discussion. The fourteen of us participated in thoughtful, informed, and respectful debates. We did this both before and after we worked on a new project. This activity gave us all a chance to critically think about what it is we expected to accomplish, as well as what we ended up achieving or not after we put our shovels down at the end of our time with a partner. 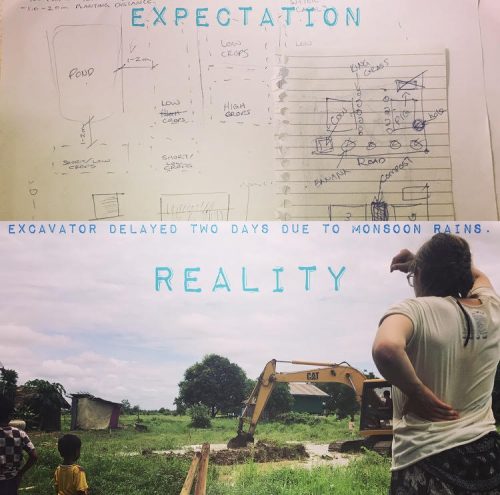 Crafted by our incredible program leaders, the group was briefed before our work began in Sisophon:

“Remember that you don’t always know what is best.”
“Ask her what she wants to do with her land, not what we would like to see happen to it.”
“Recognize that we are not from here, so how can we possibly know what the best solution is to a foreign problem?”

We asked our new Khmer friend Eychhean, a Veterinary student helping out at Ockenden, to help translate.

We wanted the land owner’s opinion. Where did she want the various crops? What spot was most convenient to her for a pigpen for her two new piglets? Most answers were shrugged shoulders, or shy laughter. None of us, completely exhausted, understood the root of her uncertainty.

Eychhean explained to me that an engrained issue with the village was that they didn’t have the concept of dreams.

This hit me hard.

Once again, I was floored by the reality of the privilege lottery I stumbled into the day I was conceived. I did nothing to deserve it, and yet so many doors were opened for me, on the basis of socioeconomic status, skin colour, and nationality. Completely arbitrary, completely undeserved, yet they were mine, and I hated that they weren’t theirs as well.

I looked at the children on the farm, happy as could be, playing in the rain, taking care of each other instead of bickering like I used to with my siblings. It made me sick to think that we were born into unequal playing fields, yet laughter, joy, and love were not robbed from these children. Is it my own understanding of happiness and success that makes this feel so unjust? While the kids were happier than I ever was with a television and air-con, it still broke my heart to hear that the notion of dreaming is nonexistent to the local families. 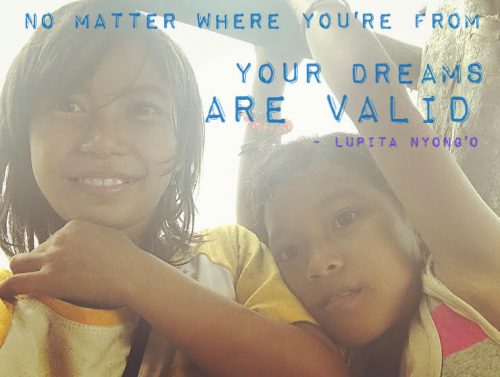 When the recession hit in the late 2000s, my father’s business suffered gravely. His only choice was to shut the doors on the last 18 years of his hard work. My feathered nest was set ablaze. Financial security, something he had worked so hard to ensure, was now up in the air. With my college years ahead of me, and both of my parents out of work, my veins pumped more cortisol than was necessary.

What I never lost in the mess of the recession, in the highest points of my anxiety, were my dreams.  The ones my parents gifted me from day one. The notion that I could be anyone I wanted to be…

That I could explore the unseen, untouched, unknown crevices of Gaia…

“They don’t have dreams here,” Eychhean said with such frankness, he could have easily been discussing the weather, “but we are trying to show them a different way, teach them that they can aspire to something bigger.”

When I thought about my privilege, I never considered its nonmaterial realm. What it means to grow up without the absolute belief from others that you are capable of moving mountains. I saw that faith in my fathers eyes, and my mother’s too. Through the times of financial hardship, we never stopped dreaming.

It obliterated my heart to realize that this woman didn’t have an answer because she had never really thought of it before.

I now understand that the extent of privilege goes far beyond how many feathers are tucked into one’s nest. It reaches into the land of the nonmaterial plane. I can only hope that our partners at Ockenden are successful at instilling a sense of aspiration into the families we worked with.

The reality is, planting some banana trees and cassava root is a short term solution for the family we worked with in Sisophon, and teaching them how to harvest a sustainable farm offers a longer term solution. But instilling the notion that the landowner can dream up how to change their land into what they want it to be, is something that has the potential to create lasting change. One that no recession, war, flood, or disaster can take away from those who not only learn it, but believe it too.

I dream to live in a world where every child knows, to their core, that they are capable of anything and everything. I dream to live among people of all identities, skin colours, sexual preferences, religious beliefs, knowing that we all stand on equitable grounds of opportunity.

I understand that I am yet to fully grasp the extent of my privilege, but if there’s one thing this trip has taught me, it’s that I won’t rest easy until I know that every soul on this planet is given the same capacity to dream that my parents once gave me.

For that I am forever grateful. 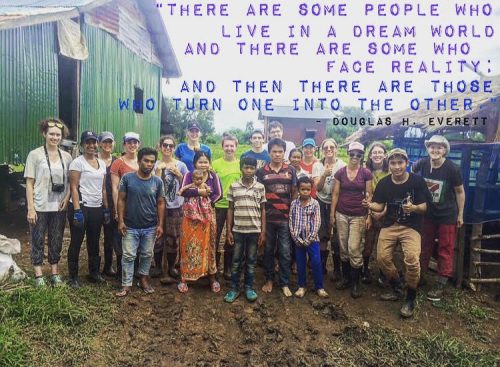