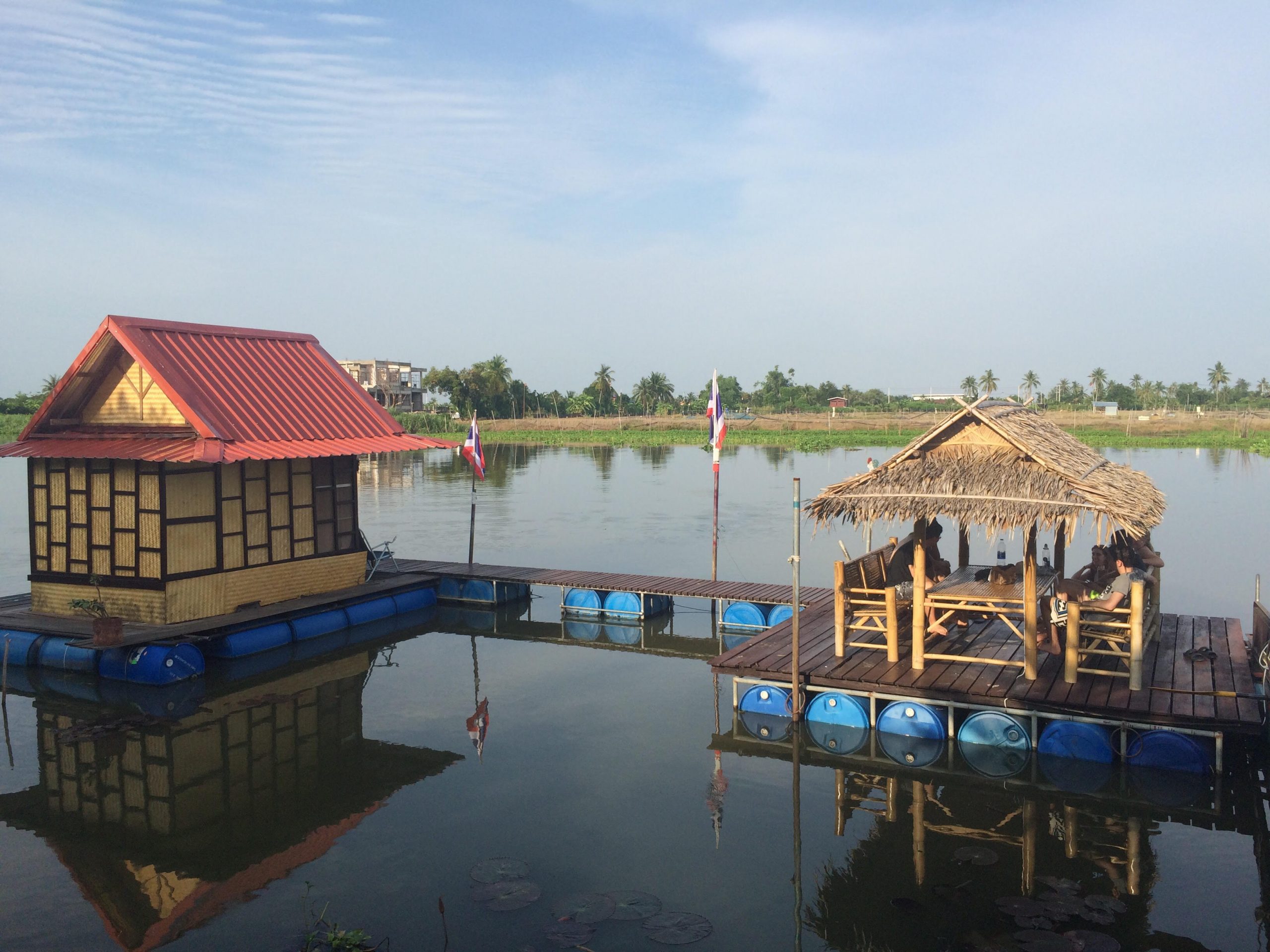 Posted at 16:01h in Southeast Asia by Anna Cunningham

In just a few hours during our agro-tour in the Nakhon Pathom province, we caught a glimpse of not only the agricultural sector that powers this province, but also less visible cultural practices and social trends.

Over the course of the boat ride along Mahasawat Canal, we stopped in four places for tastes and informal lessons with the people cultivating and working in this province largely devoid of Westerners – a fact best illustrated by the surprised stares we had attracted at the local market just the day before. 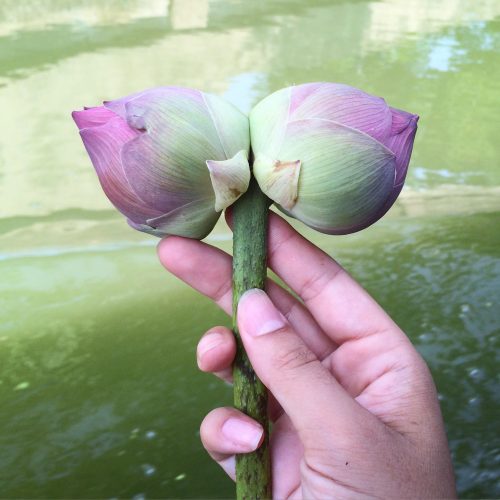 Our first stop, a small-scale lotus farm, had recently been harvested; what remained were lotus pads in some parts, and glaring sunlight reflecting off the bare water in others. Lotus is used in cooking, but it isn’t an essential ingredient of Thai cuisine like chili or garlic, among other mainstays. However, the stop did reveal some cultural history and associated practices around lotus.

In Thai Buddhism, lotus is a revered symbol loaded with significance, which partially explains why only women can come in contact with it during the cultivation and harvest process. It seems that women are deemed more pure and most worthy of touching this religiously prized plant. Why this is so remains unclear to me, as does the extent of this socially constructed idea of female purity to other crops or even other sectors of Thai life. Our visit to the lotus farm revealed layers of meaning beyond just the lotus as crop and food. 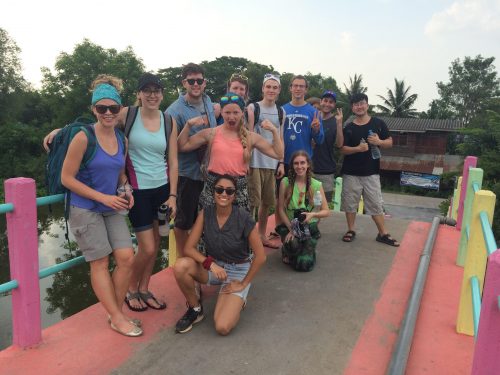 The Farm to Table team after their agro-tour

Our second stop was a small market area with a rice cracker (khao tang) stand. Here, we watched two Chinese study-abroad students flash-fry fresh crackers for us, followed by a smear of sweet sauce, a pinch of pork floss, and a sprinkle of sesame seeds for a delicious afternoon snack.

On the table behind the stand were several more varieties of seasoned crackers that had disappeared by the time our group of eleven got back on the boats. The presence of the two Chinese students working the stand was worth noting for several reasons, among them the historical Chinese influence upon Thai culture (including cuisine to a large extent), and significant proportion of Chinese heritage in Thailand. 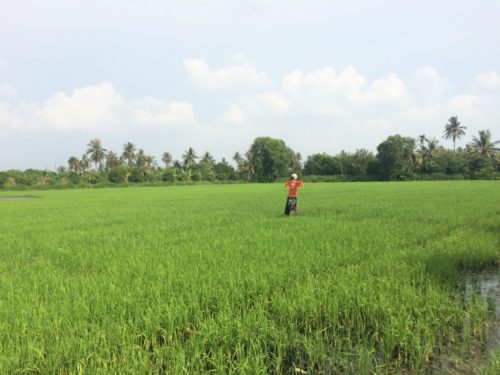 A field at the farm

Our third stop was a family-run operation where we alighted on a cozy patio with stone tables and benches covered in colorful ceramics, canopied with the plants harvested here: gak. The flesh of the fruit is rather tasteless, but when the juice is extracted and combined with a typically generous Thai quantity of sugar, the result is lightly flavorful and refreshing.

The woman running the farm uses gak to make other products such as soap, of which each of us received a small sample. We also tasted butterfly pea (ban fakkhao) juice, a medium-blue concoction made from the plant’s flowers. 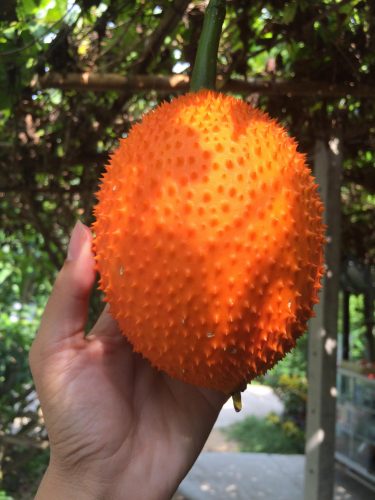 The woman’s nephew appeared and introduced himself, a student at a Bangkok university home for break. Nakhon Pathom is a predominantly agricultural province that provides the bordering capital province with a multitude of crops and food products. The nephew’s story shows how, as in many rural and agricultural places around the world, young people leave to pursue higher education, usually with the aim of subsequently settling in more urbanized places.

Indeed, the nephew’s degree was unrelated to food, agriculture, or rural geographies, and he was able to speak some English and translate between his aunt and our group. Despite deeply entrenched historical prescriptions and cultural norms in Thai society that seem quaintly ‘traditional’ and conservative to a Westerner, globalization and modernization are as real here as they are on the other side of the globe and everywhere in between, their impacts on display at both the structural and individual scales. 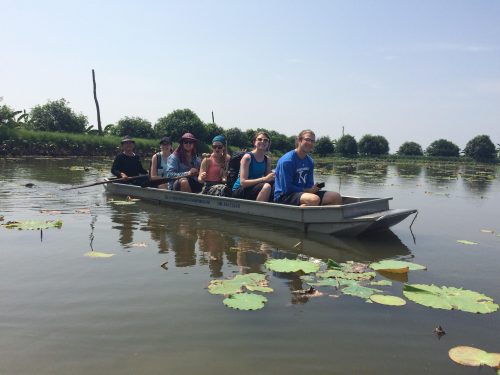 In the boat at the lotus farm

Finally, we finished our tour at a family-run farm with large fields of fruit trees and field crops. After a bumpy and boisterous hay ride on a makeshift tractor, we returned to the covered area beside the farmhouse for a snack of fresh and candied fruits. Guava, papaya, jackfruit, green mango – all fresh from the farm.

There were many portraits of the late King Bhumibol and Queen Sirikit, their son, King Vajiralongkorn, and other visibly prominent officials all hung up around the piles of fruit for sale. This stop illustrated most clearly the veneration many Thais have for the late King and how constant a presence he still is in their daily lives and their collective consciousness. The royal family in general is highly respected, or feared, depending on whom you speak with, but either way it is pervasive throughout the visual culture of Thailand, be it in Bangkok or a rural town with almost no Western tourism whatsoever.

While the tour was ostensibly agricultural, it revealed fascinating intersections in Thai culture and society. In learning about food production, we also witnessed layers of histories, stigmas, and contradictions so entwined that what seems like a single layer turns out to be a whole multitude.