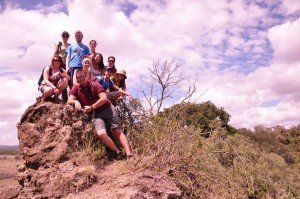 24 Jun Football, Chicken coops, and a little bit of friendly competition in Uganda

Posted at 12:14h in East Africa by Operation Groundswell

After much exploring, our East Africa: Discovery team was ready to get our hands dirty and get involved with partners we’d long been waiting to meet in Kampala, Uganda. Our first project was working with a local organization called RWEYOWA, which stands for Rescue for Widows, Elderly, Youth, and Orphans With AIDS/HIV. This organization directly supports over 50 families that are affected by AIDS/HIV. Our project was to build and supply 5 of these families with chicken coops. Each family was to have a coop built for them at their homes and then stocked with 10 chickens per coop. The goal of this project was to provide an additional source of sustainable income for these struggling families.

On day 1, team OG arrived at Namasuba, a small neighbourhood on the outskirts of Kampala. Upon our arrival, the folks from RWEYOWA welcomed us into their guest house. Mama, Tony and Kasamba were the first to greet us and helped us settle into our new home for the week. 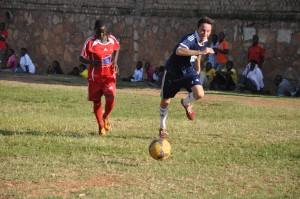 After getting our selves set into our new place, Tony and Kasamba brought us on a small tour of Namasuba and its market. Adam and Linda, our fearless leaders, went to the local radio station expecting to talk about OG, but the purpose of it was mostly to talk about our upcoming football game.  We expected it to be a fun community scrimmage with people of all ages and skill levels… but were matched with a local women’s team who practiced weekly. We got pretty scared.

Walking to the game, we were in full uniform looking like a team, but expecting to lose 10-0 within the first half. The people on the streets looked at us as we walked to the game… more so than usual. As if that wasn’t pressure enough, we had a crowd of over 200 people there to watch our game, and watch us lose. Our warm up did NOT inspire confidence in our team. Once we all figured out which positions everyone was playing (many of us had never really played soccer), we took the field under the hot Ugandan sun. The field was not quite what we were used to back home. There were a few hazards that made things a little bit more interesting. There were a few times where we had to take a time out to shoo the cows from the field. “Safety” Sarah unknowingly almost backed up into a cow during the heat of the game.

After a few minutes of playing, things started to look up. We had underestimated ourselves as everyone played their hardest. We wanted to save face while our opponents wanted to crush us. The crowd was not on our side, thinking we were in fact going to get destroyed. The game was really close, but we had considerably more ball possession than they did. Eventually Kiana was able to get a breakaway off an interception near the goaltender on their side, and scored the first goal of the game. This goal made it a lot exciting for us, being able to make it on the score board first. The local crowd was very excited as well, knowing that this game would be a close match. The first half came to an end, and we clearly needed to work on our cardio. Everyone was tired, thirsty, and starting to feel exhausted.

During the second half, they were starting to get the best of us. Some of their players were switched out for younger boys (some as young as 12), and a few of our members switched with other locals too. With Olivia, Sarah and Andy on the defense, we had manage to keep them from scoring. The game eventually did tie up, making it 1-1. They gave the ball a good lob shot, a sneaky trick that our goaltender Catherine had not been trained to stop. The game kept going, and we kept getting more and more tired. Team OG got a really good opportunity for scoring after a brilliant play by our forwards with only minutes left in the game. A player on the opposing team blocked the shot with their hands and we were given a penalty shot. After much consideration, Andy stepped up… and then fell down… into a pile of mud and cow shit… and did not score. After a good laugh, we helped her up as the game was still going. The game finished between OG and the community with a tie, and the tension was gone. We congratulated each other on a game well played, and took a lot of pictures with the members of their team. Needless to say, the community was impressed with our soccer skills… and so were we. We ended getting in contact with a lot of their team members and some of us even hung out with them again at a later time. The goal of this game was to integrate us into the community where we would be staying, and it was a complete success. We all had a really good dinner and a good night’s sleep after that, thinking hardest part of the week was over… 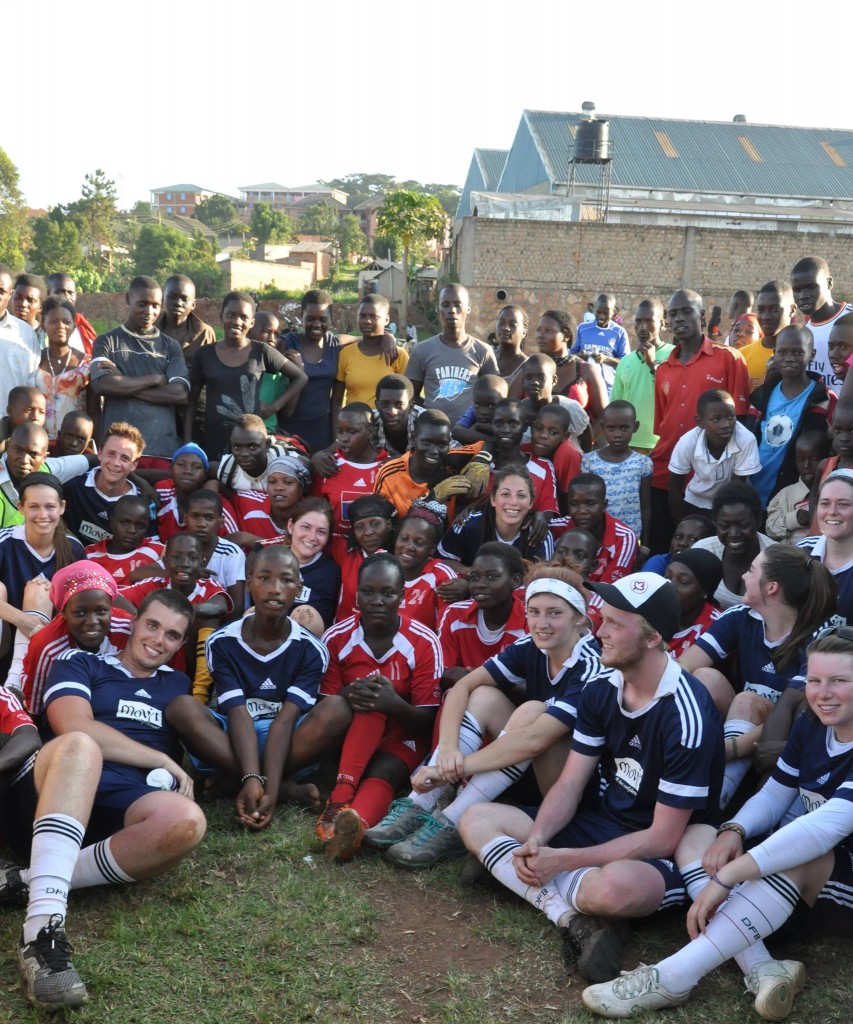 Wednesday morning, after assessing battle wounds from the previous day, we headed down to the RWEYOWA Office where we picked up our tools and created teams at random. It worked out to be the Elders (Kyla, Sarah, Andy, Jeremy and Adam) versus the Young Guns (Catherine, Liam, Olivia, Kiana and Linda). It worked out that the youngest member of the Elders’s team was older than the oldest members of the Young Gun’s team.  Armed with spears, hammers, and saws, we hopped into a mottatu to go to our respective work sites. The Kids got it easy and were dropped off not far from our home, while the poor Seniors had to travel and extra 30 minutes to get to their site. The old guys, not quite sure what they were doing found the first day to be the hardest and longest one of all. The kids finished a brilliantly constructed chicken coop hours before their competitors. 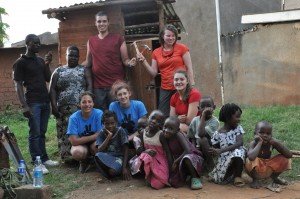 The families where we built the coops were very happy to have us. They appreciated our efforts and contribution, and the Oldies were even offered a home cooked meal from their host family (it was delicious!). The Kids worked with a family who had a 16 year old daughter who had been bedridden for the past 3 years. It was a really sad sight to see as she looked to be younger than 8 years old. Being able to contribute to a family like this made the team want to work even harder, knowing that what they were experiencing was nothing compared to what this family had been going through. The blisters, aches, and fatigue felt insignificant as the Young Gun’s pushed through, knowing that it was going to directly benefit this family. After even only the first day of work, both teams felt like they had done a significant contribution for the families that had been working with.

The following morning, both teams got up early and were off to get the 3rd and 4th coops built. Having gained a little bit of experience and many blisters, the second day went much quicker for both teams. On the second day, the Young Guns already had names for the members of their teams. Kiana was known as Blisty for having 12 blisters on her hands, Olivia and Liam were Climby and Lifty for their clever technique of Olivia climbing onto Liam’s shoulders to make up for our lack of ladders, Linda was known as Bleedy for being accident prone, and Catherine was known as Hammy for her impressive hammer skills. The Elders named themselves after their weapons of choice. The Hammer (Kyla), The Spear (Adam), The Saw (Jeremy), The Bouncer (Andy), aaand the classic Safety Sarah. Both teams were done within 10 minutes of each other, and were able to have supper together and enjoy the rest of the night as a group. Many of them took advantage of this time off to practice some line dancing, hoping to put it in use for the upcoming talent show in Gulu… maybe. 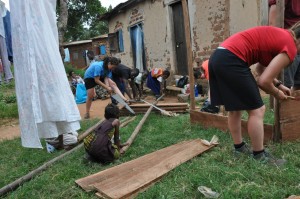 On the Friday, we started our day a little differently. Instead of going straight to building our final coop, we started by visiting St-Joseph’s Primary School. St-Joseph’s is a school for children between the ages of 6 up until 15 years old. The school does a lot of work with orphans and children affected with HIV and AIDS to help make it possible for these children to get an education. We were welcome by the school’s children gathering together in front of us and singing us a few of their songs. Afterwards we broke up in pairs to each “teach” a class for the morning. We were given mottos from the school to introduce to the children, and then worked with them to create a poster based off that theme.

In the afternoon, we took off to get to our last work site for this project. The two teams joined together to build one final coop.  The last coop took us less than 4 hours to build, and many of us were able to take some time to climb trees and have fun.

After our days of building the coops, we delivered the goods. Each family got 9 chickens and a rooster. For most of us, handling chickens was a new experience. Some of us handled it better than others. Kiana and Liam were quite boss, handling two at a time. Kyla unfortunately grabbed the chicken with nervous bowels… and got shat on. Kyla passed the chicken on to Kiana… who then also got shat on. By the 5th delivery, everyone took part in the handling of the chickens and no further incidents occurred. The families were glad to have their coops filled. One family in particular even went as far as doing a happy dance for us. It was really satisfying to see our work be completed and to see the appreciation from the families who we were supporting. It was a great way to wrap up our work with RWEYOWA, and left us feeling optimistic for our projects to come.