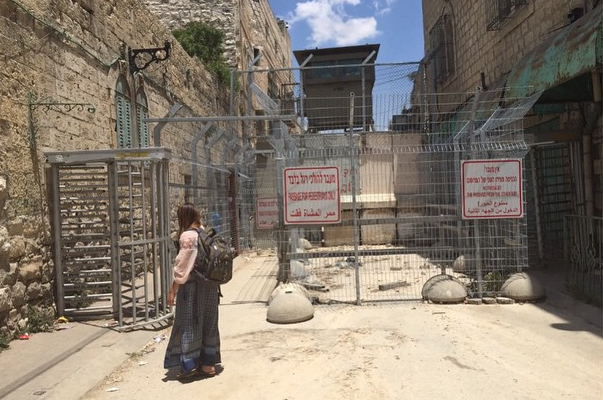 23 Jun Getting All Sides of the Story

Posted at 17:28h in Middle East by Justine Yu

I have to start by saying: I am truly, irrevocably, and passionately in love with Israel and with Jerusalem. Jerusalem is an incredible, vibrant, metropolitan city and it has made me feel like my life has meaning. Maybe that’s a combination of the volunteer work and the lessons we’ve been learning. I just know that Jerusalem has given me a breath of fresh air. It’s a healing place, and maybe – not just for me, but for a lot of us – Jerusalem has been teaching us things about ourselves we didn’t know before, or forcing us to sit in situations we can never find at home. I love that when I’m walking in the center, in between buildings of coffee shops and thrift stores and streets busy with people walking to and fro, somehow every time I’ll bump into someone I know – a local we met the other day, a fellow volunteer, someone who’s given us lectures. It makes Jerusalem feel wholesome and alive and vibrant. It personally makes me feel less alone in a city that’s still a little foreign to me.

However, having said all this, I wonder how much people know when it comes to the way “outsiders” have been treated just outside the walls. The other day, we found out for ourselves. Bethlehem was total chaos. From the minute we were dropped off, we jumped into the center, where medina-like shops surrounded us at all sides. Vendors shoved cloths and spices under our noses, haggled for prices with us, begged us to buy items here and there. And then having crossed through, the markets spit us out into Nativity Square where the Omar Mosque stood on one side and the Nativity Church stood on the other. We spent the morning looking through the church where Catholic belief says Jesus Christ was born. Russian tour groups pushed and shoved us aside, people bowing their heads and pulling out symbols, beads, and books and touching them against the rocks. Ornate candles and little chapels in and out of the cave-like church would pop out behind dimly lit halls. 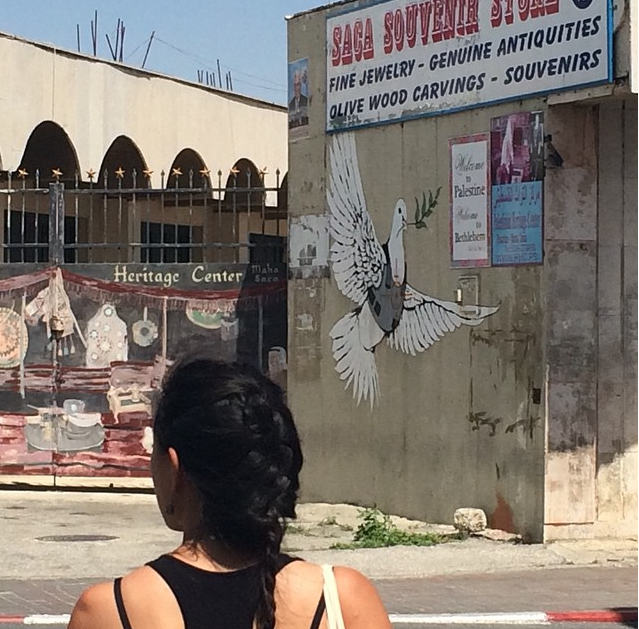 Retracing our steps back to Nativity Square and out from the grasp of umbrella-armed tour guides, we made our way around the city, which became more worn down the farther we walked. Finally, we started seeing graffiti. Banksy territory was near. The first piece we saw was the infamous dove with the bullet proof vest and the snipers mark in the center, and then we crossed the street and the invasively high wall greeted us with spray paint inked as far as the eye could see. The graffiti read messages of peace, messages of injustice, calls to action, pleadings for foreigners to cause change, etc. Some of us were given the opportunity to spray paint the walls on painted-over sections, while others carefully rejected the offers. At one point, I realized just how far the media had fooled me into not acknowledging there existed another side to the conflict. I’m not saying one is more right than the other. As I’ve said before, that’s impossible for any of us to decide, but it is important to get all sides of the story without the media telling us what to think. And this, at the end of the day, is exactly what Erin and Miriam are trying to achieve.

Reading the messages and looking through the art was difficult enough, but I think the scariest part came later when we crossed back into Israel from the West Bank. Accustomed to driving to and fro on Abu Rami’s safe little bus, taking the Palestinian bus service back into Jerusalem was a fully different experience. Our bus was pulled aside at the border and most of us had just woken up from napping on the way back. Instantly, all the Palestinian people stood up and walked out of the bus for systematic body checks. Two men came onto the bus. One wore a huge bullet proof vest and walked around asking for passports, while the other held an enormous assault rifle in his arms and a handgun tucked into his pants. The armed man walked behind the other, stony-faced and checking our seats. When they had gone through all of us on the bus, they got off, and the Palestinians returned, quietly taking their seats. This was, I think, the hardest moment for me. Their faces were not worried or scared or stressed out or frustrated or angry. They were simply silent. It dawned on me – this was the norm.

While I kept my mouth shut and tried not to cry, they went back to reading, or texting, or talking amongst each other. The whole experience was surreal and strange and very confusing. You’d think that having come from America (this is, after all, the stereotype) one would be used to seeing guns, but I don’t think I’ve ever had a gun so close to my face in my life. To clarify, I didn’t feel unsafe and frankly I don’t think any of us did, but it was definitely a moment in which I faced the reality that our news back home just simply does not cover.