19 Jul Getting down and dirty with organic farming in Peru!

Posted at 13:07h in South America by Operation Groundswell

The week of  fog in Lima didn’t slow the group down, but the serpentine traverse through the mountains from Lima to Cusco almost did. Cusco’s sun, cultural charms and the awesome Hostel Magico brought us back to life just in time to head to Pisac. Arriving at Kausay Punku felt as organic as the products the farm produces from the land. Back home in Canada, organic farms seem ubiquitous and the marketability of their products a given. That’s not the case for Darrio and his farm family where the challenge lies in raising awareness of organic farming’s health benefits and inherent value to a community accustomed to buying larger, cheaper, inorganic produce. Oh, did I forget to mention that they’re producing these organic products while adhering as closely as possible to Incan traditions and tools? The family’s conviction is almost as impressive as the diversity of the farm. 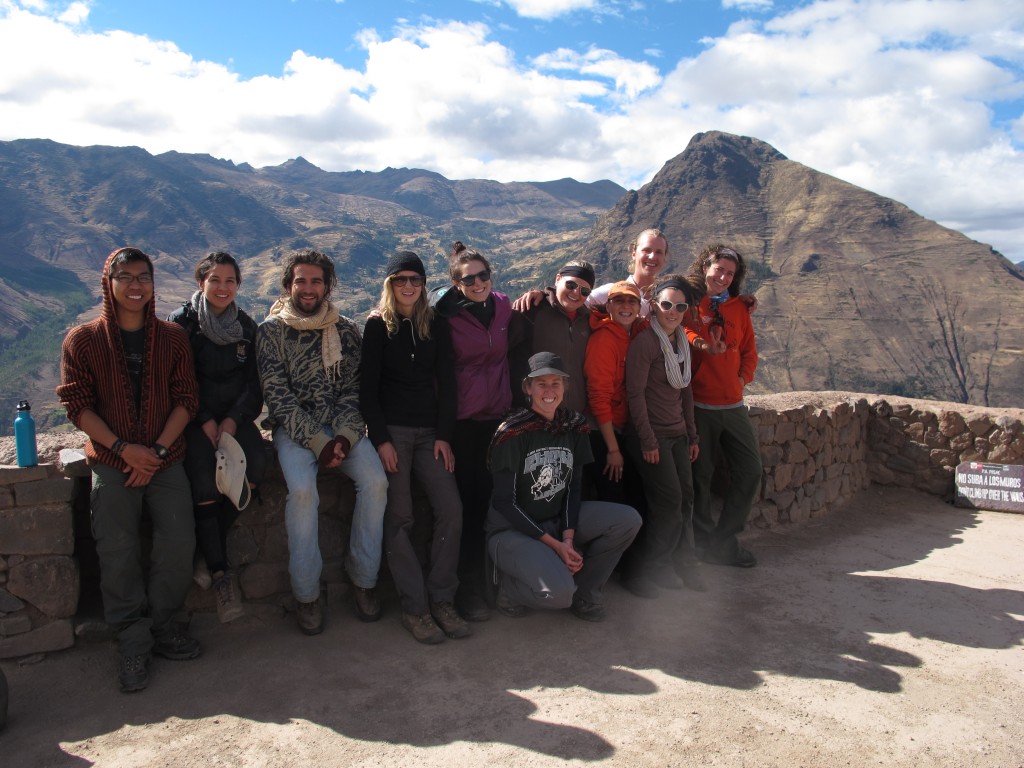 Everyone enjoying the gorgeous views from the top of the Pisac ruins.

After hauling some bags of manure compost down the hill, we ate supper and slept in charming mud huts nestled in the mountainside. I got to use a bathroom with the best view of the mountains and stars I’ve ever encountered. Next to the composting toilet in the sky was a mud temple built in the spirit of the Incans. I’ve never seen so many holes punched in the sky. My jaw is still frozen mid-gawk as though I was still leaned up against the wall of the temple. 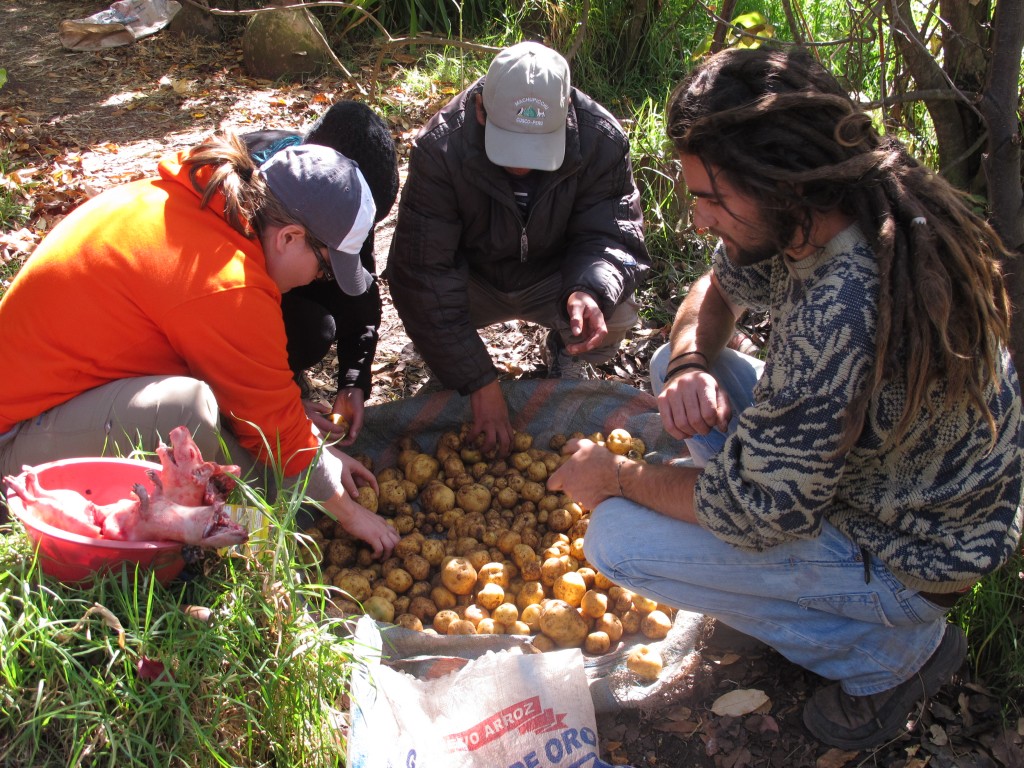 The group cleaning and admiring our potato-ey loot!

On our first full day, we awoke and harvested the potatoes we would consume during our visit. After breakfast, we participated in a very hands on cuy (guinea pig) workshop, especially for the three of us who faced the reality of our carnivorous ways by culling the cuy we would later consume with our bare hands. The heavy nature of the task was made lighter by a brief ceremony involving flower petals before we aided in cleaning our cuy for lunch. Following the cuy workshop, we watered what seemed like hundreds of medicinal herbs nestled in soil pot holes in the steep mountain slope. We channeled our inner lumberjack during the rest of the day as we cut down eucalyptus trees, chopped them into lengths suitable for the seed museum Darrio required, and hauled them up the hill until night fell. Our cuy lunch break was much need and I enjoyed the organ sausages much more than I expected. Night fell and so did we. Only the stars could hold our attention long enough to momentarily delay slumber.

The next morning tested my pathetic sea level lung capacity as we hiked the nearby Pisac Incan Ruins. I was not alone in my huffing and puffing as we explored the ruins buildings, temples, water systems and beautiful farm terraces that mirrored the topography of the mountains. We were so fortunate that Darrio had time to spare to share his knowledge and tour us through the ruins. The descent back to the farm for lunch was much, much kinder than the ascent. 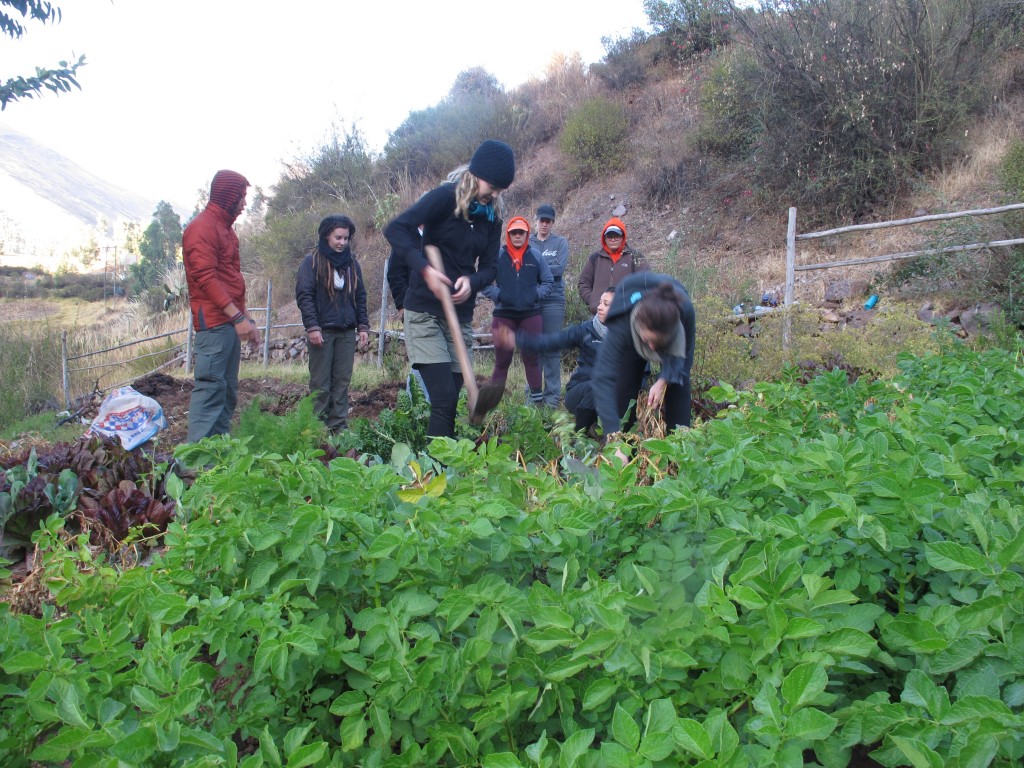 The group harvesting beautiful organic potatoes which were then enjoyed for lunch!

The afternoon of agriculture workshops found us planting more potatoes, pulling cow teats to make some delicious cheese, hauling more manure compost down the hill, and working the soil with some traditional Incan agriculture implement that was part pogo stick and all hard work. Impressively, some members of the OG crew had the right mix of strength and hand eye coordination to make that tool till the soil. As we adjusted to working in the elevation, Darrio had given us some traditional herbal oil, called Muna, to help open our lungs. The beneficial effects of Muna may have played some part in the group’s keen interest in learning more about those pesky pothole plants we had watered the day before. During the medicinal herb workshop ,we inhaled the scents of the leaves Darrio distributed to us while discussing some of the different ways they can be used to promote good health. 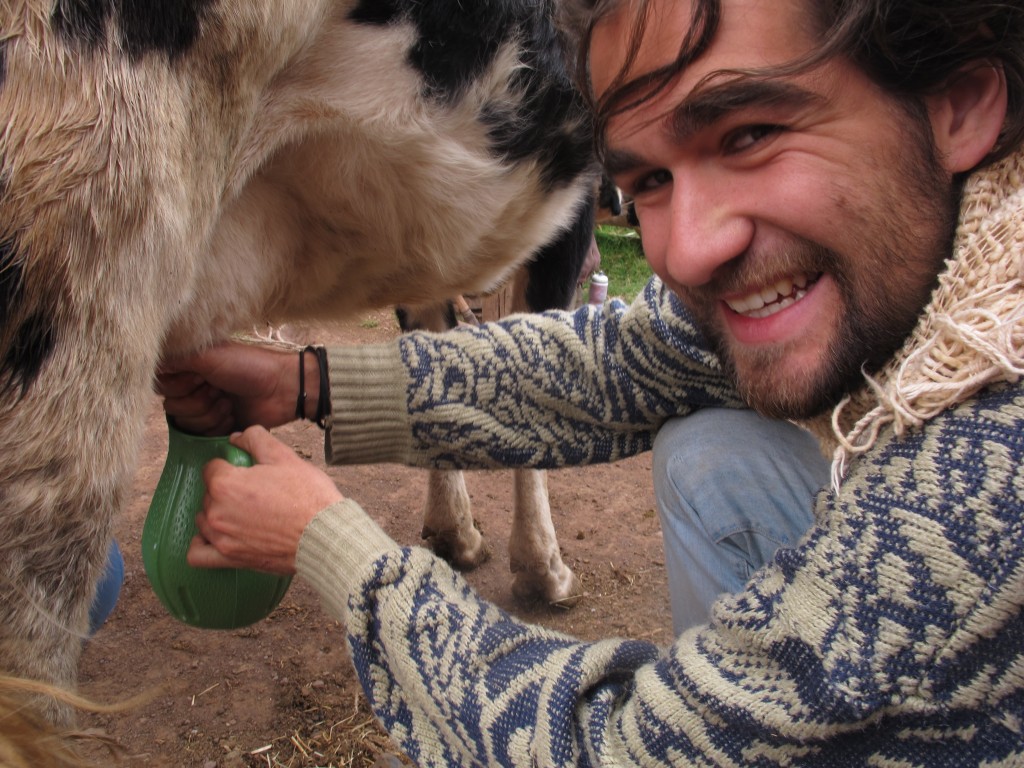 Happily milking the farms wonderful cow, the milk of which would then be made into our mornings breakfast cheese! YUM!

Our group gathered together in the temple that evening for a few ice breaking games that, given the good company we found ourselves in, gave way to some great discussion before we headed back to our respective mud huts for some much deserved sleep. The only thing that rivalled the breathtaking and inspiring sights of Kausay Punku was the number of thank you’s we received from Darrio and his family for visiting – neither were in short order.