10 Jul The Grey Scale in Israel-Palestine

Posted at 09:24h in Middle East by Operation Groundswell

When I first arrived in Jerusalem, I was not sure what to expect. A lot of us weren’t. Between the general complications of the Israeli-Palestinian conflict and the combination of the three main monotheisms within the gates of the Old City, it was hard not to look at things in black and a white—a good and an evil. I did not know which was which, but I was determined to find out; only then would I have an “unflawed judgment” of the truth of the Holy City. I was wrong though. 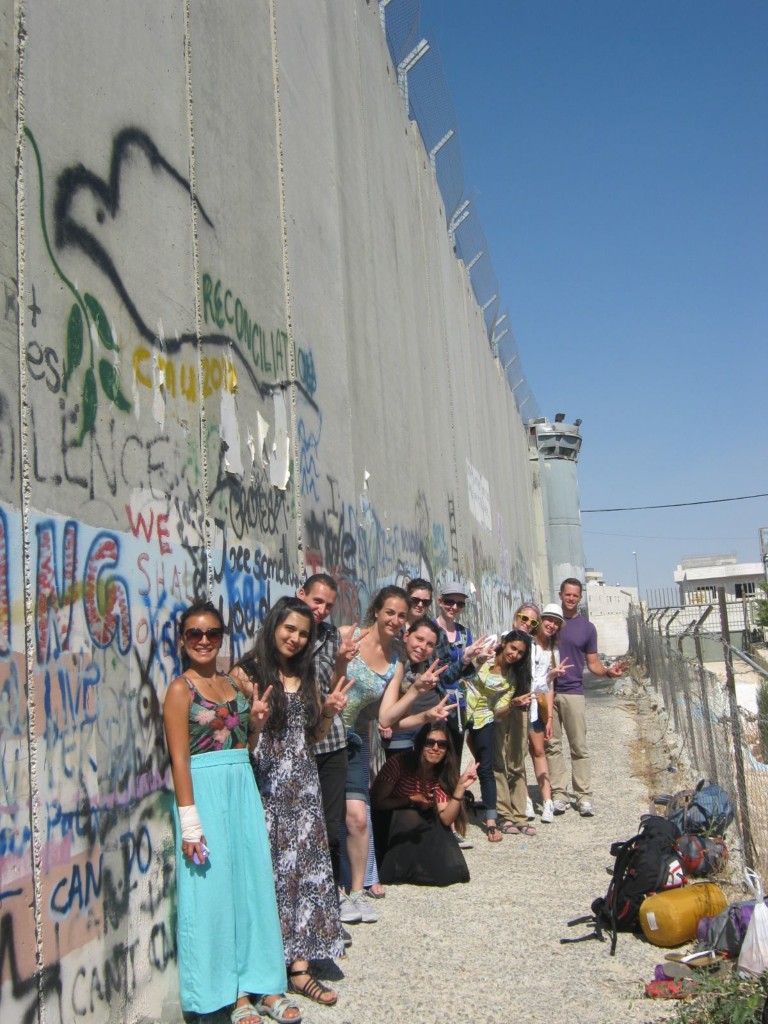 Our crew at the Wall in Bethlehem

Stepping out of the airport, I immediately realized that it’s actually pretty difficult to distinguish the Israelis from the Palestinians. My cab driver spoke to me in English, and looking at him gave me somewhat of a clue as to which “side” he was on. On our way to volunteering, I would walk by a group of Jewish people speaking Hebrew—and I was sure I heard a few Arabic words in the chattering. When we took a tour of the Old City and visited the four quarters within the walls, we started to see the distinction more. Still, at that point I had my persistent black and white image of side-one and side-two.

We went to a meeting held by the Palestine-Israel Journal with a panel set up with two representatives from each side of the green line. They all agreed on the two-state solution and it was clear that there are many organizations that do work in harmony with the intention to bring forth peace. A man in the audience objected to the two-state solution, and seemed to be blaming his Palestinian representative, Saeb Erekat. I think this was the point where I started to see a grey scale. My vivid, black and white image suddenly seemed blotchy and I could not consider certain areas either shade.

We started working in the Israeli public school for special needs children, Madrasa Al Nour. Everyone there spoke Arabic, which confused some of us again. It became our daily routine and we eventually became very acquainted with one another. Day after day, we would hear their voices and see their smiles more often. Learning how to communicate with them without a mutual language was the biggest challenge for us all—but slowly we learned to speak to each other through sports, art and music. It was the school on the outskirts of the wall, but we were able to gather reflections of the inside through many of the teachers and even the behavior of the children.

Later that week, we visited Yad Vashem—the Holocaust Museum—where we walked through many dark hallways and heard even darker stories from Jewish people during that tragic time period. I understood the victimization and the horror, but I also  wondered about the refugees’ effect on conflict. Before I got too convinced of it being detrimental to the lives of the Palestinians, we spoke to a secular Zionist who demonstrated how Jewish nationalism predated the time of Hitler. To be honest, I was never aware of there being secular Zionists—but it gave me the opportunity to separate politics and religion for a short while.

Our crew has been moving around in the past week. From our Jerusalem apartment in a Jewish neighborhood, to a Nablus refugee camp, to a permaculture farm underneath settlements, to a village of Ethiopian Jews, to Christian Arabs in Bethlehem, to Hebron and Ramallah—we have been on the move with the intention of enriching our academic experience. Our personal insight is not only discovering what it means to be Jewish, or a Muslim, or Israeli, or Arab as a separate people—but what it means to have some commonality and solidarity between the sides by discovering that there is no clear black and white. The grey scale is what truly connects them.