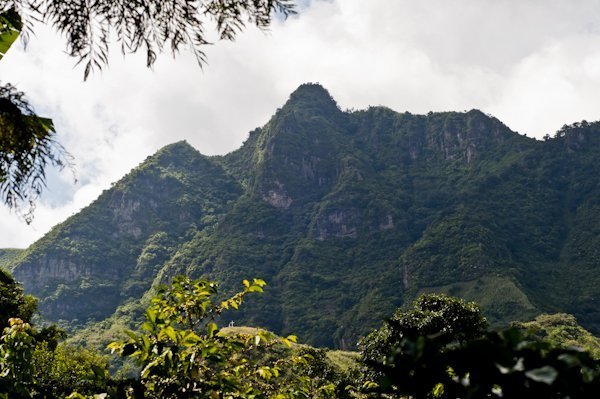 Posted at 15:22h in Central America by Eric Schreiber

Hello from the OG Guatemala: EXTREME 2015 group. I am Jesse, reporting from San Juan on day 11 of our program. I am currently at our humble apartments on top of a steep hill leading down to Lago Atitlan. Passing by are tuc-tucs (3-wheel taxis) and los indigenas, all of whom say hello as they walk by me. If I look up from my screen, I can see the peaks of Rostro Maya, a mountain which the locals think looks like a face (in fact, a father in a family that just walked by pointed out the nose for me). Above is a picture, try and see if you can see the face.

Enough of the setting. Here are some of things we have done in the past 11 days: lived in 2 cities, taken 20 hours of private Spanish lessons, cooked (at least) 2 meals each, climbed 1 volcano, spent 10 hours in a chicken bus (not fun), made 13 new OG siblings, and collectively taken probably 1,000+ photos. For all the parents reading this, you’ll be getting to see some superb photos when we get home. Plus, we’re an attractive group.

More importantly, however, is what we’ll be taking home that can’t be captured in photos, and in some cases even words. Upon embarking on this trip, I didn’t have many expectations of what my experience would be like. I had been to “poor” countries before, but only for vacation. One of the first things I noticed in Guatemala City were security guards with shotguns, standing at the entrances of stores. The infrastructure was…unlike America. Except for McDonalds, which warmed the night sky with the glow of its golden arches.

I was reminded of the warnings I received before going to Guatemala: you have to watch your back in the city, the country is in unrest because of the corrupt government, that the drug cartel is gaining momentum. However, the minute I walked into the hostel, I knew the trip was going to be good. Not once have I felt unsafe here. Instead, I’ve felt welcomed. The locals seem to always be smiling when we are walking on the streets. Nine times out of ten, they will greet us with a “buenos dias” or “hola.” Whenever I have talked to someone, they have been eager to help me. One of the best experiences I’ve had was asking a family directions to Xela’s cemetery, and ending up talking to them for five minutes and learning some words in Quiche, a Mayan dialect.

This country has gone through decades upon decades of hardship, partially thanks to the US government. The civil war ended in 1996, but that didn’t solve much except for ending the violence that war entails. During our stay we have heard personal accounts from a massacre survivor, a rebel guerilla spy, and others who lived through the times of military tyranny. We even saw the skeleton of a woman’s husband while she was standing right next to us at a museum for Los Desaparecidos (the disappeared). Despite this, and all that the Guatemaltecos have been through, positivity thrives here. This, above all else, has left the biggest impression on me. (Note: there is still a lot to be done to spread that positivity.)

From my viewpoint as a US citizen from an affluent town, life here should seem bad. It’s harder in almost every way to get by and live comfortably. Nevertheless, I’m left sitting here, thinking about why people in the US aren’t more like people down here (except for all the car-horn honking). With all the material wealth that we have, why can’t we be happier? Right now, I’m sitting in a cinderblock room, with flies buzzing around my head and no AC, but I’m as happy as a street dog who just found a stack of corn tortillas; it’s hard to frown when I’m surrounded by my OG squad.