Posted at 15:04h in Central America by Developer

Henry is the son of Don Lucas Mendez Juarez who passed away a year ago and Dona Manuela Cox Chavajay. His father was a carpenter and his mother works in her butcher and traditional textile shop. Henry’s parents had 4 children, two men and two women.

Henry’s childhood was split between mischief and games with his friends. It was at this stage in his life that Henry discovered his passion for art, whenever he found the opportunity he always painted on the walls. Henry used chalk or charcoal that he found in his mother or grandmother’s kitchen to paint. 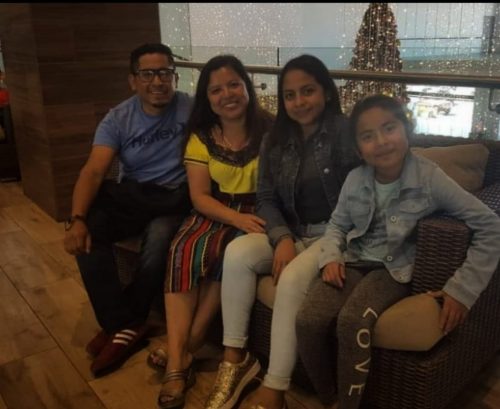 When Henry was a child he wanted to learn all the painting techniques, so he would go to different painters’ houses to watch them paint and learn their styles. Unfortunately for Henry, the painters were very selfish and did not allow him to stay. Luckily, his brother, Antonio, who had already started painting by this time, and who received encouragement and supplies from their father, became Henry’s teacher.

Despite all the encouragement from his parents, Henry only studied up to third grade. Henry felt that studying was not his destiny because what he loved most was painting and combining colors.

Henry’s youth later became marked by drugs and alcoholism, which he said would have led to his death had nothing changed. Henry reached a crisis point when he had to spend a year in the hospital as a consequence of his addiction. However, Henry believes that God worked a miracle on him and gave him a second chance so that he could do things differently.

After his rehabilitation, Henry and his brother founded the project “Help me to Paint my Future”. The project brings children from families where there is alcoholism or drug addiction together for painting classes. When they started this project there were 35 children, today there are 15 children because many of the children who originally participated in the project have since become professionals. One of the limitations that they find with this project is the lack of materials to teach children. Henry and his brother bring this project to life by selling his paintings. From each painting that they sell they allocate a percentage to buy materials that they use in the classes. This group of children, with the help of some neighbors, have painted murals in San Pedro that deal with themes from their trauma and experiences with addiction. They also used recyclable materials to make a collage to raise awareness about the impact we cause to the environment. 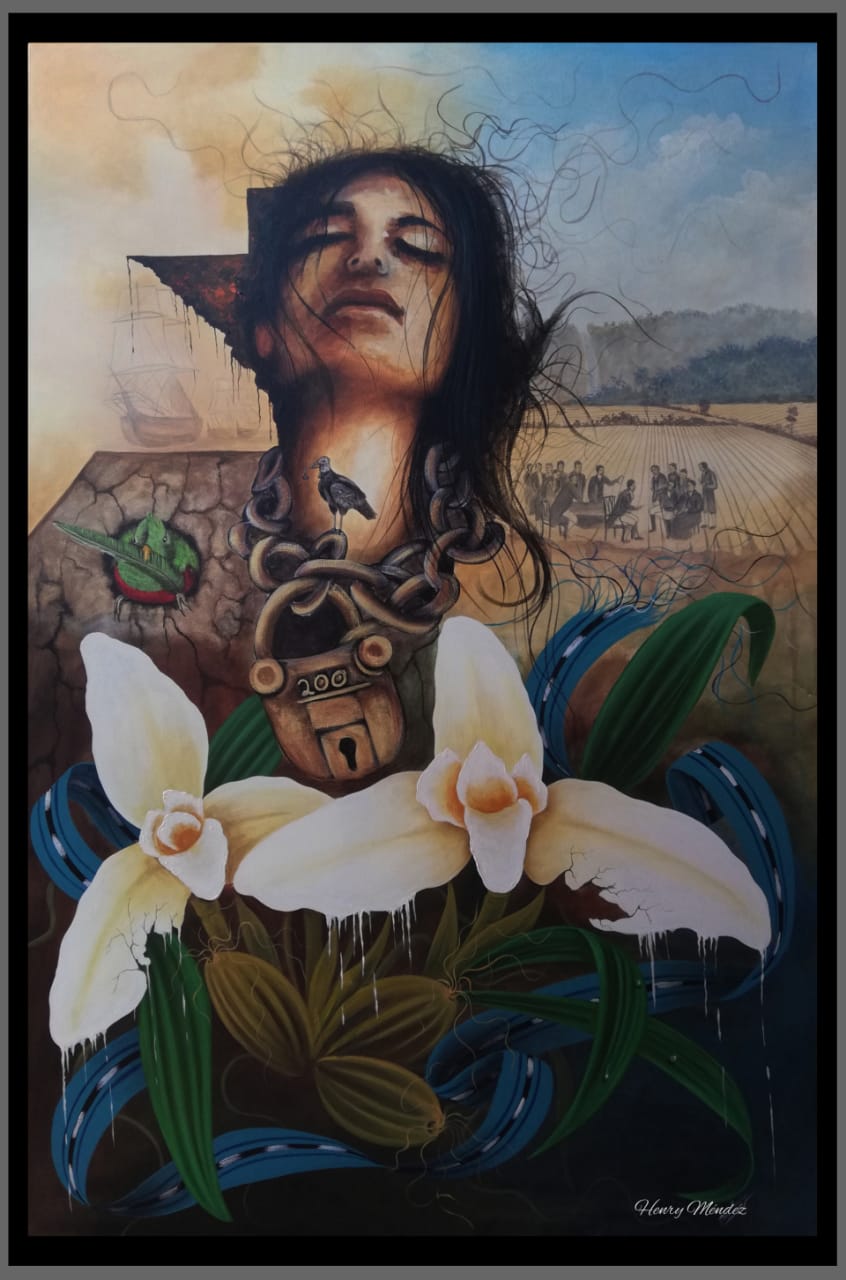 Henry says that most painters paint the same traditional themes and landscapes. Henry wanted to paint something different so he began to read books by great painters and artists to deepen his art. It was then that he decided to change his art technique and develop a new style which he uses to protest and raise his voice.

Henry’s works transmit culture, history and help recover ancestral traditions. Another big focus of his art is to protest the political system and raise awareness. He protests the way that Guatemalans are made to suffer by bad public institutions which only perpetuate the poverty faced by our people. At the same time, Henry uses his art to raise awareness among the population so that we do not remain silent and become complicit in the torture that afflicts our country. In elections, politicians often use gifts to deceive the population with a pound of sugar, a few roofing tiles or money. For Henry, these gifts represent the purchase of our will and the sale of our present and future, the consequences are suffered by all.

Henry also uses his art to protest environmental harms. We are responsible for the garbage in the lakes, rivers, seas, and oceans. We can cause damage to nature by using pesticides, herbicides and chemical fertilizers. Henry thinks this is why we are suffering from more deadly diseases. He says that the lessons our grandparents taught us like how to use the organic waste from the house as fertilizers for the plants has been lost today. 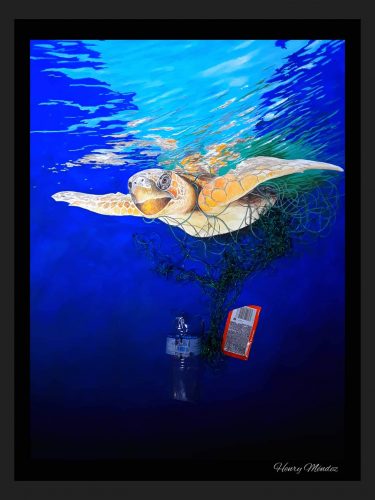 Henry says that the artist does not receive support from the government despite the fact that Guatemala is internationally recognized as a land of high quality artists. Henry feels that the government spends a lot of money on football but does nothing to support the arts.

For Henry, painting represents the purest feeling that comes from the heart and captures it on canvas. Henry has exhibited his art in many places such as Massachusetts, New York, and California in the United States, as well as in the countries of El Salvador and Nicaragua. Nationally, he has been present in art collectives, solo exhibitions and many places where he has been invited to exhibit his art. For Henry, his next goal is to be able to exhibit his art in other countries.

Henry asks children and young people to fight for their dreams. Let them make art, music, poetry, etc. But he also has a strong message: Stay away from drugs and alcohol because the consequences are devastating in life. 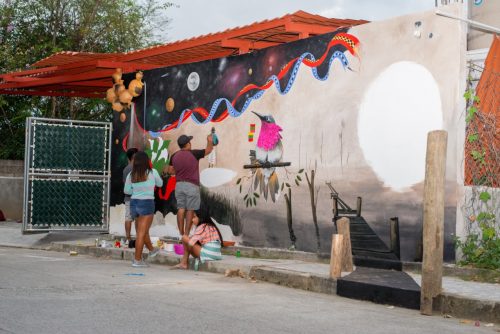 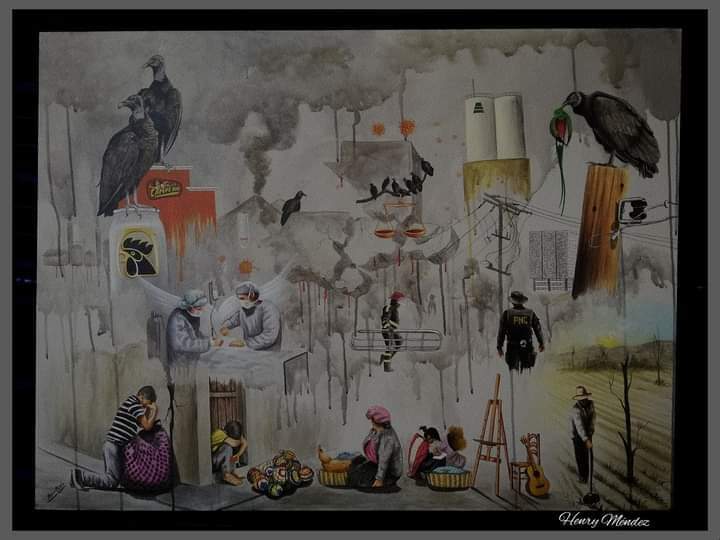 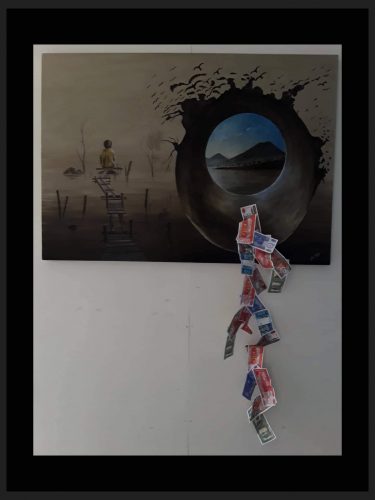