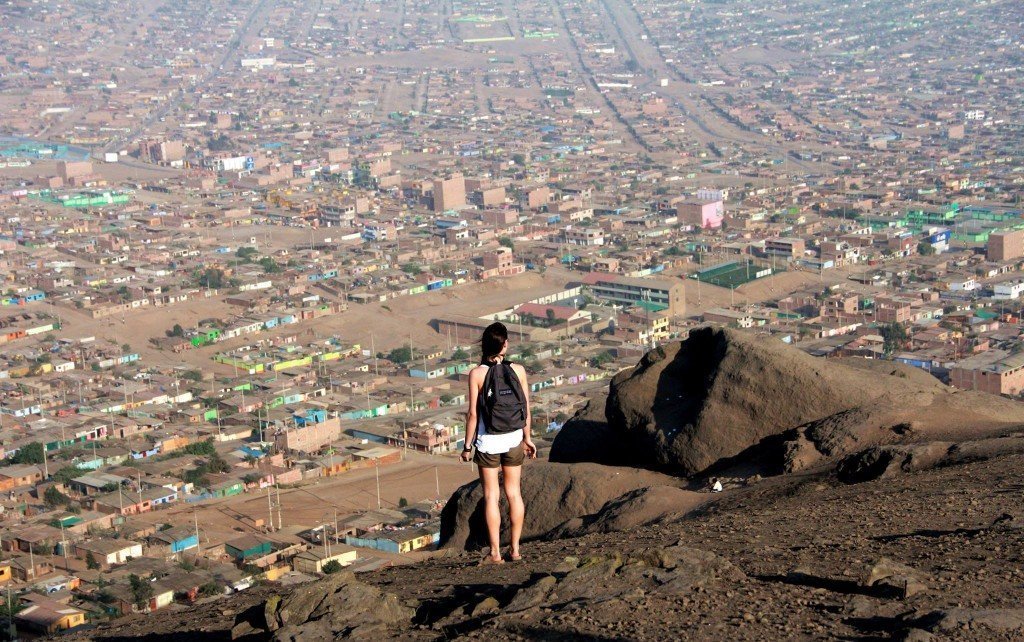 02 Jun Hiking Around Pachacutec and Feasting on Potatoes

Posted at 13:59h in South America by Operation Groundswell

The past seven days have been absolutely jam-packed with new experiences, new sights and…potatoes. Lots of potatoes. We are currently writing from the second floor of a double decker bus driving up a mountain through Peru. We’re 26 hours into the 30-hour journey to Tarapoto where we will catch the ferry to Iquitos, which is another 3-day ride up the Amazon River.

So far, we have spent most of our time in Miraflores, a little section of Lima where we’ve been taking Spanish lessons and sleeping at La Casa del Mochilero. The people we’ve met have come from all over and spoken different languages, but somehow we’ve all gotten along like we’ve known each other for years. Whether that’s because of Mikel and Lynn encouraging us to “mingle” or just because we realized that we’re all stuck with each other for the next 6 weeks is anybody’s guess. 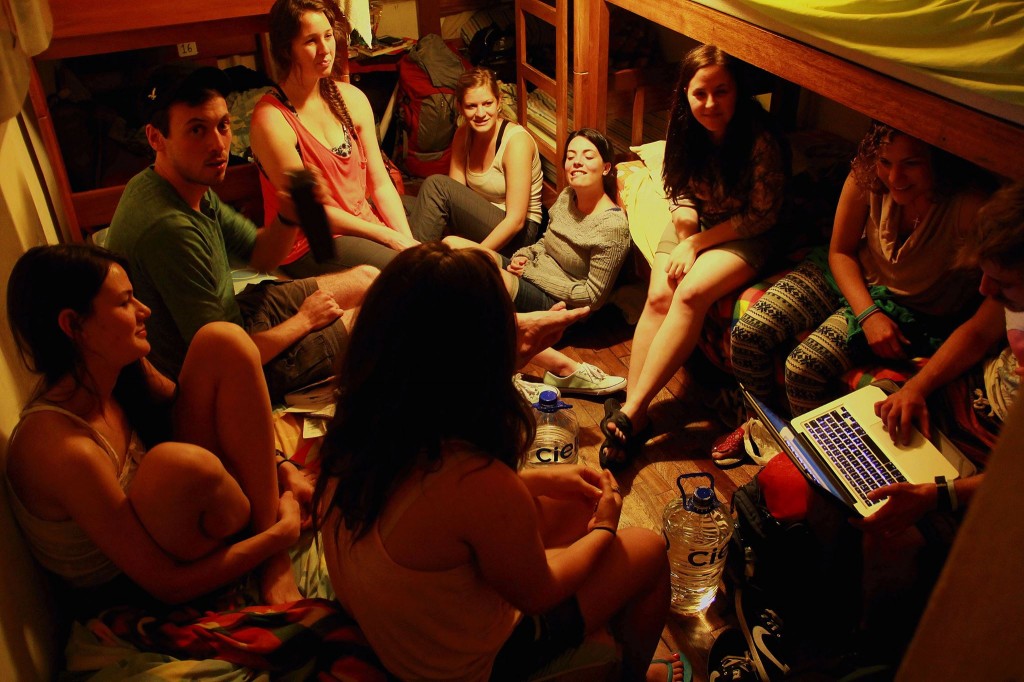 Group bonding in the hostel. Photo by Joey Lau.

The first official day began with group breakfast, a meeting, Spanish classes, and finally exploring the market near our hostel. Day 2 was more Spanish and then a 2.5-hour combi ride out to Pachacutec where our Program Leader Mikel’s Peruvian family welcomed us with open arms and even more potatoes (quite possibly the best potatoes anyone’s ever had)! We climbed up Gorilla Mountain and heard all kinds of stories about the history of Pachacutec from Dario (Mikel’s Peruvian father). It was so worth the trek out there because of the kindness and hospitality of the people there. On our way out, we were invited to see Amberli’s amazing paintings and he even let us each take one back with us. Pachacutec is such a humble and overwhelmingly generous community of people.

The next day started late because of a mishap finding the supermarket to buy breakfast. After Spanish and lunch, we rushed to our bike tour of Lima. Our guide, Franco, told us some amazing things about Lima as we rode along the coast and through the city. The rest of the night was spent discovering the beauty of cheap Peruvian beer, meeting the OG’s Mind and Body group, and heading downtown for a little fiesta together. That night was hands down the most fun! We all slept really well after that.

Day 4 was more Spanish and a trip to Peru’s national museum where we learned about the history of Peru and the Shining Path. Although it was sad to hear about their violent history, it was good to be able to learn about such a prominent part of Peru’s past. We had a much needed mellow evening, bought a guitar named Rosie, ate some tacos, packed and passed out to prepare for the early morning bus ride that began yesterday. 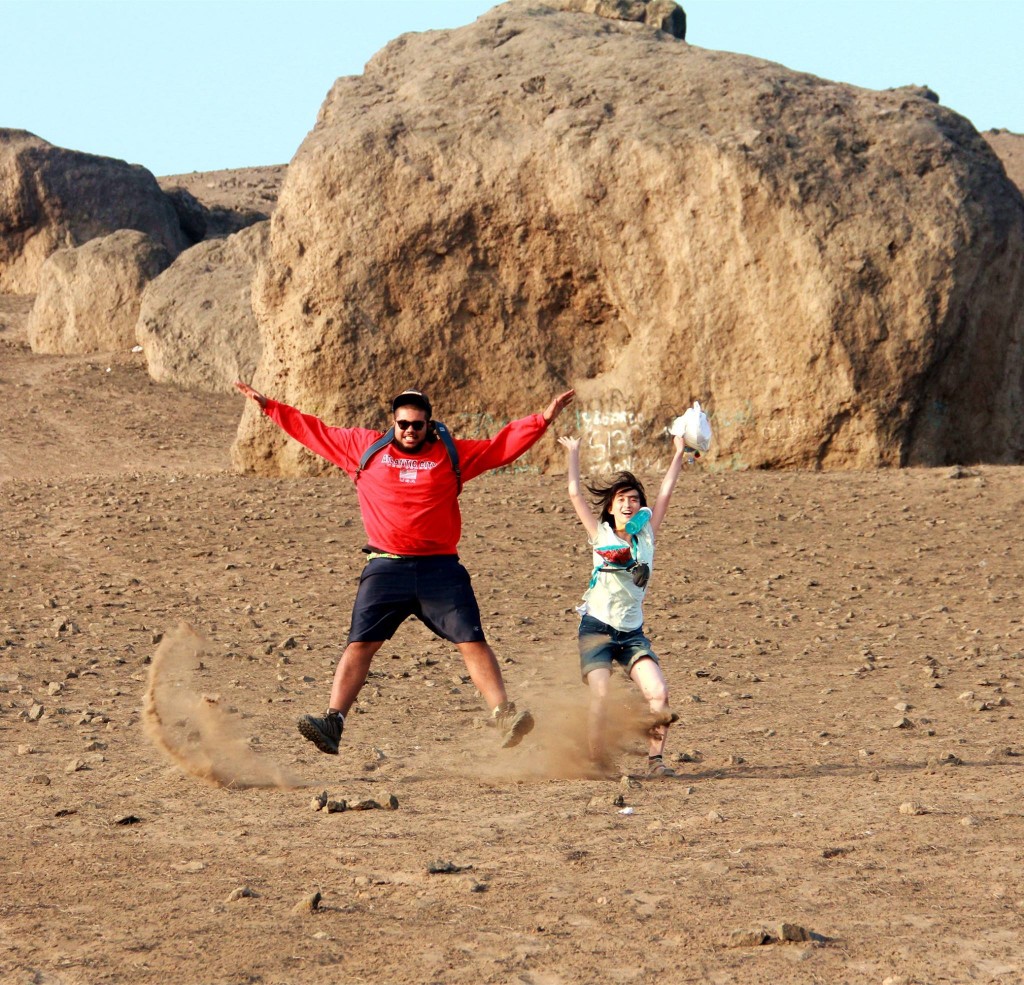 We woke up early (some even earlier for a morning swim in the ocean) and headed out. The bus ride so far has consisted of the vibrant costumes and jazzy editing of ’80s Latin American music videos, Argentinian rom-coms and Gael Garcia Bernal putting on his best sorrowful face in South American social dramas.

So now you’re all up to date! Like we said, it’s hour 26 on this bus and so far, nobody has cabin fever yet, which is always a plus!