21 May Castles, Coasts, and Canopies

Posted at 12:38h in West Africa by Operation Groundswell

At last, the whole WAD is finally together!

The last participants arrived on Friday and we all connected on the sandy shores of beautiful Cape Coast. For some, this was their first time ever seeing the ocean so once we arrived from Accra, the afternoon was spent jumping waves, catching rays and building friendships over street food. 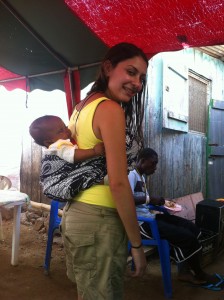 Andrea gets more than chicken and rice at this local Cape Coast restaurant.

Saturday morning the group woke early, and while BB fetched breakfast (fresh fruit and hard boiled eggs and bread) Michelle and two participants headed to the station to collect a tro-tro to Kakum while Jeremy whisked the others out of bed. Our group of 12 filled the tro-tro and we headed to one of Ghana’s most famous parks – Kakum National Park.

The park is home to a variety of plants and wildlife – as well a suspended canopy walk. The suspension bridge is approximately 100 feet high and is made up of 7 bridges and 6 tree-platforms. It was built in partnership by a team of Ghanaians and Canadians and is a beautiful way to view and experience one of Ghana’s protected forests.  And did I mention, the group was awesome – especially those who were afraid of heights! 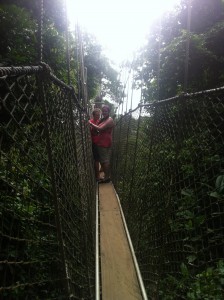 OG crew on the canopy walk in Kakum National Park

After the canopy walk, we went on a hike through the rainforest to see the parks ‘tree house’ accommodations (no we didn’t stay the night, maybe next time!), learned about different medicinal plants and enjoyed some fresh palm wine before heading back to town.

Next was the heavy hitter – we broke into groups and went for a guided tour of Cape Coast slave castle. The castle has been under different ownership – the Swedes, British, Dutch, back to the British – and is globally known as being used as a holding group during the slave trade. Inside the castle remain dungeons which were used as holding cells to contain enslaved Africans before sailing across the Atlantic. The castle held captive as many as 1000 enslaved Africans, and often held them for more than 3 months without proper food, water and sanitation.

After our visit, the group met in the center of the courtyard beside our lodge to debrief. We discussed in detail how everyone was feeling and what they were thinking after this experience. The group did a great job putting into words how they thought and how they felt. One participant had shared that they could never have imagined how this could ever had taken a place, another mentioned that while they were walking around, they just wanted to say sorry.

We agreed as a group that we can’t change the past, but what we can do is be informed and understand both sides. When we ignore history, we deny the right that it happened.  With acknowledgement we attempt to pay our respect. This experience is something that opens our eyes to the devastating truth of our past and is a reminder to each of us to never allow this type of atrocity to take place again. On the wall of the castle, beside the doors entering the male dungeon, there is a plaque which serves as a promise to all; it states that we, as human beings, will never allow such an injustice to humanity to take place again.