21 Aug Falling in Love with Cambodia…

Posted at 11:58h in Southeast Asia by Operation Groundswell

After leaving four of our OG comrades behind in Chiang Mai for a few extra days of rest and relaxation…in a clean Thai hospital, with some rehydrating IVs and friendly nursing staff, the rest of the team started the long journey to Cambodia. 25 hours, several brightly coloured buses, two Cambodian taxis, and one tuk-tuk ride later and we were finally in Siem Reap. Known as the gateway to the amazing Angkor Wat temple complex – the largest religious monument in the world – Siem Reap was an awesome place to introduce the crew to much of the beauty that is Cambodia!

The team took off in their tuk-tuks to explore the stunning temples with both Hindu and Buddhist histories. Angkor Wat was only the beginning of the day with stops at Bayon, Ta Prohm, and other random wanderings into the ruins and surrounding ancient forest! The group also ventured further out into the green rice-paddies and dirt roads of the countryside to find the Landmine Museum. Founded by Aki Ra, a Cambodian hero that has been de-mining his country one bomb at a time. Aki began using his skills derived from his former child-solider days to defuse landmines in the 1990s. After many years, and official de-mining training, he has established his own NGO and removed over 30,000 landmines himself.

Before taking off to Phnom Penh, the team took the time to enjoy Siem Reap’s awesome night market, rooftop beach bar, yummy cuisine and even mixed and mingled with fellow OGers of the SEA Unearthed team! 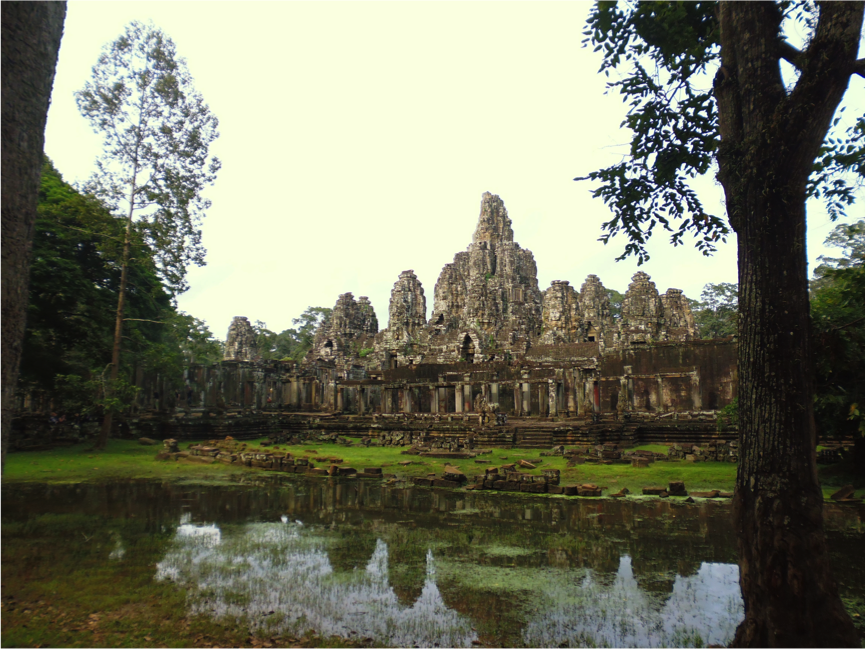 One six-hour bus ride later and the crew found themselves in the Cambodian mecca of Phnom Penh. Established on the banks of the Tonlé Sap, Mekong and Bassac rivers, Phnom Penh is home to over 2.2 million of the country’s residents and is growing quickly, not only in business and development but with exciting arts and cultural scenes popping up all over the city. Of course it is also full of amazing local markets, the Royal Palace, Wat Phnom and the National Museum, a major assortment of restaurants and quirky drinking holes! 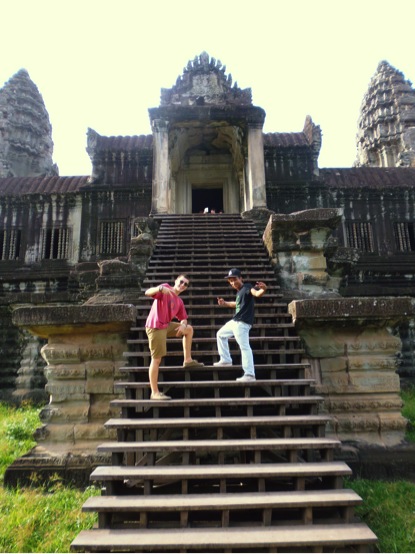 The team was thrown straight into the Phnom Penh rhythm with a trip to (the best) hole-in-the-wall Chinese Dumpling house and a night-lit walk around the city. Strolling by the Independence Monument coloured green and purple, cruising along the riverside full of street-food vendors and old bicycles selling an assortment of colourful Gangman Style and Hello Kitty balloons, and stopping to take in the beautiful moonlit reflection on the Mekong river was all it took for the group to fall in love with Cambodia and it’s biggest city.

Next up for the group was a screening of the 1984 movie The Killing Fields at a local theatre the Flicks. The movie served as a helpful introduction to the events that led to the tragic Cambodian history of the Khmer Rouge. The next day, the crew (reunited with the four Chiang Mai stragglers) headed to Choeung Ek and the S21 Prison. Being two of the most well-known and horrific sites of the Khmer Rouge regime the day was intense and challenging but necessary to contextualize present day Cambodia, as well as learn from the collective mistakes of state and society.

The sadness and emotional exhaustion of the previous day was contrasted with a look into present day Cambodia’s hard work and happiness. The team suited up on two wheels and headed out to the islands of the Mekong and the quiet countryside located just outside the busy city. Local ferries, narrow dirt trails, bamboo bridges, mud pits (ask Kaitlin for more information), fruit and veggie fields, silk weaving lessons, banana treats and lots of HELLO’s from cute Cambodian kids eager to see some barangs on bikes…were all part of the days adventure. 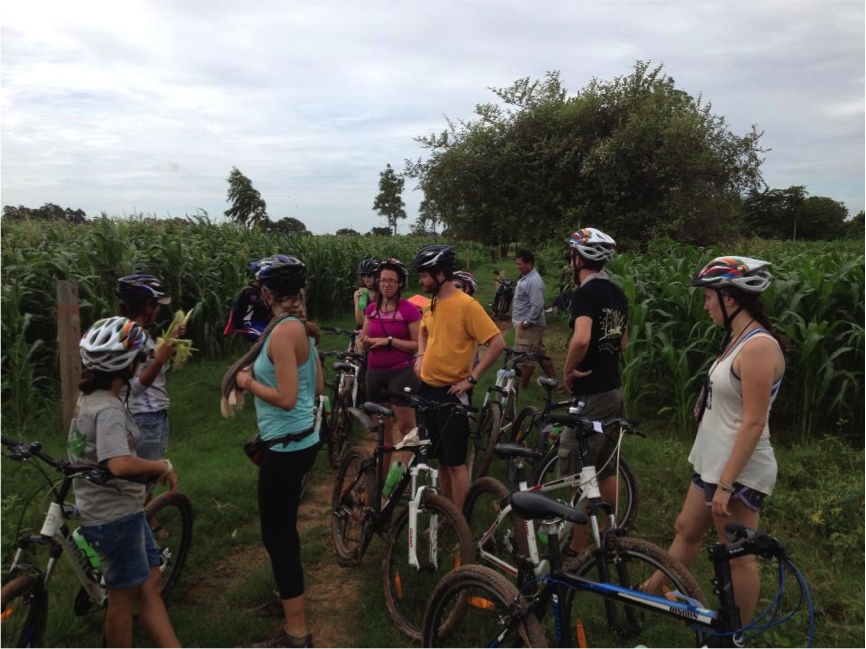 Any trip to Phnom Penh wouldn’t be right without a party with friends and family! OG and Tiny Toones – an organization spreading creative arts to youth in the slums of Phnom Penh – got together for yet another amazing collaboration of people, food, drinks, music and dance! Breakdance battles happened, as did lots of laughs, story telling and good old Cambodian shenanigans. As always, the night was a highlight for all that joined and it solidified OG’s love for Cambodia. It was a perfect send-off for our OG Animal Conservation crew as the next day, we jumped into a minibus and headed up to Mondulkiri province for the much awaited …. ELEPHANTS! 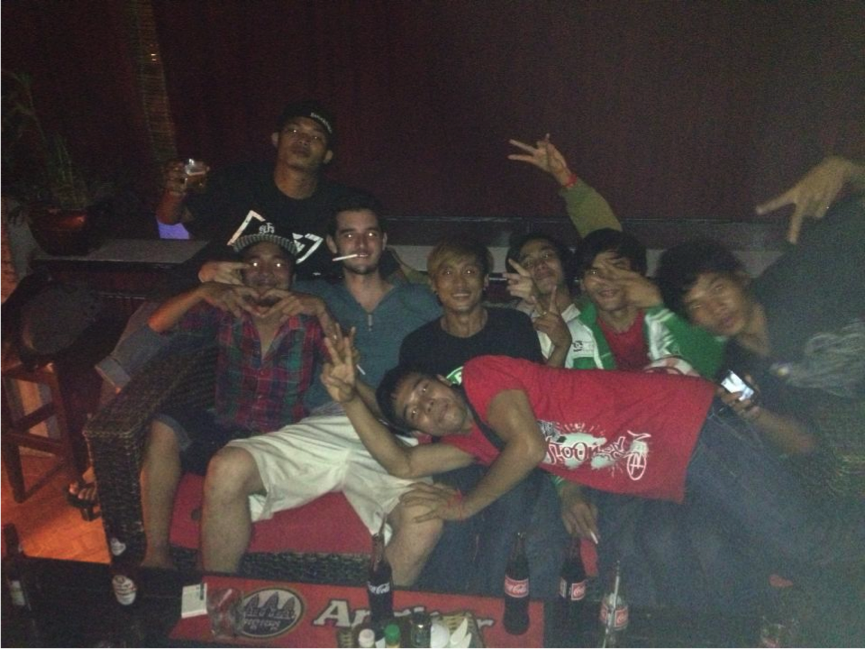 Our friends at Tiny Toones