Posted at 05:41h in South Asia by Operation Groundswell

Norbu explains how when he went to school in Jampaling there was never any light at night, his uncle Tashi leads us back towards their families’ home, large groups of fireflies swirl on a stretch of black farmland, community farmland that can be shared by anyone in the village willing to put in the work. We walk along the white dirt and rock path. Tashi plays music from his phone.

The morning started in a canoe, alone on Phew Lake aside Pokhara. The water is flat and the once painted paddle, held roughly in the fists without a handle grip. Far away from the fisherman and old women from across going off to sell or to buy, I take off my shorts, boxes, fake black Ray-Bans and hop one foot into the water. I swim around, keeping the boat in sight. I work back into the boat by jumping for the seat and kicking in. I dry off in my long boat, a wide canoe painted red and blue, the winner of a big race last year I was told and I believe it since it moves like water on ice, efficiently. I eat honey roasted peanuts and when I’m dry I slip my clothes back on and paddle back to the city, the tips of white capped mountains on either side, the Peace Pagoda up the hill to my right, the smell of burning garbage and sewage as I steer the boat back to the rental space.

I meet Tashi at the spot Norbu e-mailed me to go. He’s handsome and young. He’s ready to leave right away. “My village is 25 kilometres away. Norbu there.” I strap my bag up higher and get on the back of his motorcycle. We ride along the main tourist strip, past dozens of restaurants, guesthouses, internet spots and stores selling bottled water, chips, turn up and away from the lake, towards old Pokhara, the market full of cheaper places to eat, sleep and buy things useless to tourists like lake fish we take speed when the road is flat and clear and slow down at the round-a-bouts where we go about any way there’s space, between wooden wheeled tables with green tomatoes picked too early, kids and old men on bicycles, motorcycles, trucks, buses. We drive up the highway, through the green valley, we pass trucks with rocks, feeling the heat on my left arm and smelling the black smoke. Buses try to pass each other on roads meant for one and a half. I close my eyes as we weave between or hope for their turn as they charge forward. I’m nervous as I watch the wide vehicles tilt off their tread, the axles shaking towards my kneecap. We ride alongside a river and stop in a busy roadside market.

Norbu waits under a tree with his cousin, an important boy in corduroys, the reincarnation of a Tibetan Lama known for strong meditation. Norbu and I hug. The four of us have Cokes out of glass bottles from a small stand where a woman rolls out dumplings and hands back our change with hands covered in flour.

Jampaling is down the hill, over large hard shooting rapids through smooth rounded Dali-like rocks, another river suspension bridges and the one for cars, women walk with umbrellas on either side and men lay on their sides in shade.

We have more Coke with Norbu’s grandparents, a very cute couple.

Jampaling village is small, less than 1000 in total, quiet, peaceful, surrounded by green hills in any direction, lots friendly people in front of their tin roof houses too hot to sit in during the day. The school Norbu went to for three years is next to the main office of the village. Norbu shows me the once protected rug factories, the source of the village’s income forever until the orders ceded. The building is being turned into a youth centre, eventually. For now there are scraps of roof and remains from the factory. Out of the cracked bricks and other garbage, Norbu picks up a dirty rusted tool like a handheld rake with claws, he says it was used to weave and press the fabric after each row was stitched. “Now it’s junk.” He throws it back in the pile of garbage.

We walk down to the big clean river with fast flowing water. We bathe with soap and try to beat the current. We’re very isolated from the village here, alone to enjoy the river on another hot day and talk about the upcoming trips. We dry off and go back to the centre of the village.

A large group of elderly pray outside of the temple. April 29 is one of many auspicious days for Tibetans. Today marks the anniversary, 1989, when Thupten Ngudup was the first to immolate himself in Delhi, protesting China’s occuptation of Tibet. Many have burned themselves since. The temple is beautiful, laced with gold everywhere, a picture of the Dalai Lama sits in front of the gate which holds all the idols, including the God Jampa who the village is named after. These Tibetan treasures were carried over the Himalayas on the backs of men and women dressed for not the extreme conditions, climbing through the snow, atop the world’s most awing mountain range, risking their lives to flee the country they can never go back to, and towards Nepal where the settlement was setup and named for the heavy golden statue that survived the journey. A settlement originally offered by Nepal to the Tibetan guerrillas, covertly employed by the CIA, so long as they gave up their fight.

A lovely cook at the elderly centre aside the temple invites us for Tibetan tea—tea, butter, salt. Me and Tashi play a table game, Carrom Board, like billiards, flicking plastic disks into the corner pockets, white or black. Norbu says I’ve done well for my first time but I think he’s being generous.

After, myself, Tashi, Norbu, Tenzin Chomphel, the youth centre’s accountant and the head of the youth centre (RTYC), Tamdin, meet outside the office. Tamdin is a big man and younger than I expected, wearing a t-shirt from a rock concert in 2007. He tells us we’ll talk in the office as he takes out is keys. All three keys are tried on the padlock. They decide the lock has finally rusted shut. Tashi picks up a rock and the exact rug weaving rake picked up earlier by Norbu. They work the claws through the lock’s horseshoe and smack the handle with a rock, again and again. Several rock hits and the lock breaks off. Operation Groundswell is known for breaking down barriers but I don’t think we were expecting to make such an immediate impact in the community.

The meeting goes well. We want to engage with the community and we want the community to engage with us. Tamdin is the ideal man to run any youth centre. He’s very dedicated, always planning programs and working with the community. He says he’s a bachelor, his parents live in the States, and there’s room for me to stay at his house so long as I like eating chips and cookies for dinner. There are lots of laughs and knee slaps going around. The meeting ends with another Coke and I’m wondering how I’m going to sleep tonight in the large room Tashi kindly prepared for me.

Tashi wants to eat two dinners which I’m always up for. We go to the one restaurant that only makes fried beef, well cooked Norbu assures me, covered in a jerk seasoning and served with chilli sauce running into the meat and red onions on top.

When we get back to their place, Norbu finally has time to spend with his grandmother. While I write, Tashi brings me slices of boiled potato topped with salt and paprika with toothpicks to pick them up. I wash off my muddy feet and listen to the crickets. 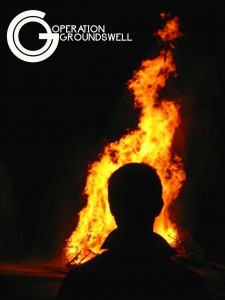