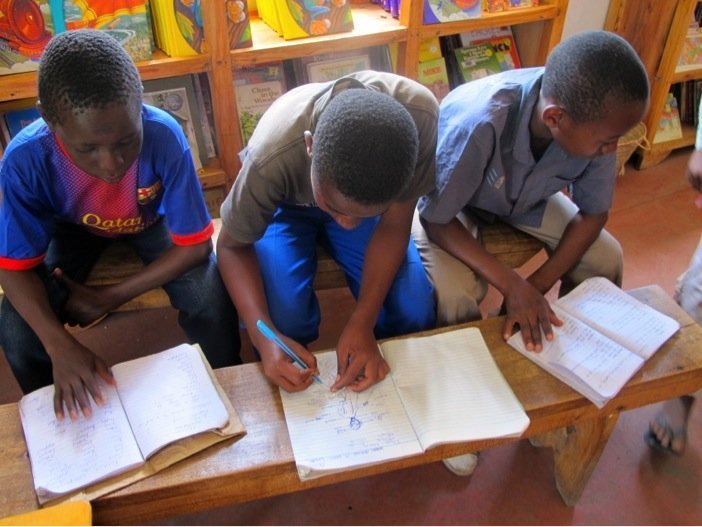 Posted at 10:06h in East Africa by Operation Groundswell

After spending two weeks in the congested cities of Kenya, we were finally able to breathe and were surrounded by the gorgeous forest of Tanzania in the village of Ngonongare near Arusha. After Kenya, my own, and I’m sure everyone else’s, expectations for this wonderful country were low and were greatly exceeded. Tanzania being the 15th least developed country in the world, on the first hand, did not look like that. Little houses, clean streets, fresh air, breathtaking views – it looked like a paradise, we began to question the trick behind all this.

We settled in the village Ngnongogare, near Arusha and the NGO we were working with here is called Jifundishe. It is a local library that was founded by Debra Kelly, from the United States. It began as a 1000 book library and the development of it was quite slow, since the majority of people in the community did not understand the concept of books, reading, or a library. Just as a fun story told during the orientation tells – people would rob homes taking everything but the books, because they did not see the importance.

Our orientation with Assistant Director Sudi Abdallah began with the story of how Jifundishe came to be and the ineffective education system of the country. Primary school, which is grade 1 to 8 is taught in Kiswahili, while secondary or high school is fully English. The argument behind such a system made by the politicians is to unite all tribes in one language – Kiswahili, and to prepare students to be global citizens who speak English well. After a few classes of English in primary school, students must adapt to every subject being taught in a completely foreign language. To accommodate for this added difficulty, the pass rate has been decreased from 30% to 20%. The idea behind this is to keep the numbers of students passing the exams at the same rate as before. But a gap remains as students still need 30% and above to be accepted into secondary school.

On top of this, the uniform fees, bringing your own water and wood for lunch, and institutional school fees are yet additional barriers that Tanzanian students face when it comes to education. No wonder there is little strive for education and reading among youth, who are already frustrated with going to school as it is!

With this struggle in education, people did not initially appreciate the library. In order to spark some interest, Jifundishe held various clinics/workshops for malaria, eye health and other events. Shortly the library became a meeting place; more people started to come in and the book count grew to 4500. Now the library also provides computers and Internet access as well as different supplies such as a lab for conducting chemistry labs.

As more people came to Jifundishe, more programs were established. Some are the UKUWAJI micro-lending program, Houston scholarship fund, adult English class, primary school English program and the Independent Study group. UKUWAJI is a micro-lending program for women to start businesses. A group of women called Mama Shanga started making paper-bead jewelry and selling them to the locals at the library, tourists, and abroad. Houston scholarships allow students who are unable to pay for secondary school themselves to receive education.

The Independent Study group is for students and adults interested in attaining a secondary school certificate without going to school. In school the national exam can only be failed once, after which, students must turn to expansive private institutions. It’s a serious challenge as school certificates are mandatory to get jobs or continue education. The program has 50 students and all of them must pay the exam fee, which is then reimbursed by Jifundishe when they take the national exam.

Throughout our time here together with students, we held a debate and various discussions on topics such as the role of governments, NGOs, and globalization. It is inspiring to see not only the youth but also adults – some in their 60s – come every day with a passion to learn more.

Our main project here was constructing an Ecobench, made out of plastic bottles and garbage. After days of collecting trash all over the village and stuffing it in the bottles, we finally laid out the bottles and covered them with the cement. Many students participated with us, stuffing garbage and practicing their English.

We were amazed and genuinely happy for the success of Jifundishe. What made us wonder is how Jifundishe in Tanzania has been so successful compared to the local YCCM library in Kisumu, Kenya. Besides being a much younger organization, YCCM does not have a representative with an established network of connections in the West. We learned from our partners that this is definitely a big struggle for the development of the YCCM library. With all of our combined studies in development, this connection with the western world and a built-in bank of donors is something we never expected as important.

Despite their differences and challenges, we wish both organizations to grow and prosper, and to continue bringing education, opportunity, and community to people. They are truly heavens to people in their communities!