Posted at 16:54h in Central America by Developer

Doña Juana Mendoza is a Maya Tz’utujil woman and artisan who uses native plants to obtain natural dyes to give color and life to her traditional fabrics. Doña Juana is originally from San Juan la Laguna, she is 44 years old, she is married to Don Miguel Aroldo Cholotio Quic and they have 3 children, two women and a man. Doña Juana is the daughter of Don Andres Mendoza Garcia, may he rest in peace, and Doña Antonia Yojcom who is 88 years old.

Doña Juana Mendoza only studied until sixth grade. Her father always gave her the opportunity to study but she felt that school was too difficult for her. Thinking about her childhood, Juana remembers that she and her siblings worked in the coffee plantations adding fertilizers, cutting coffee, and harvesting herbs for other people’s livestock. Juana says that she needed to work during her childhood to help the finances of her family.

According to Juana, her mother taught her to weave on the backstrap loom when she was 12 years old because it is an art that is transmitted from generation to generation at an early age. In her youth, Juana dedicated herself only to working in weaving, making weavings for other people who paid her labor. 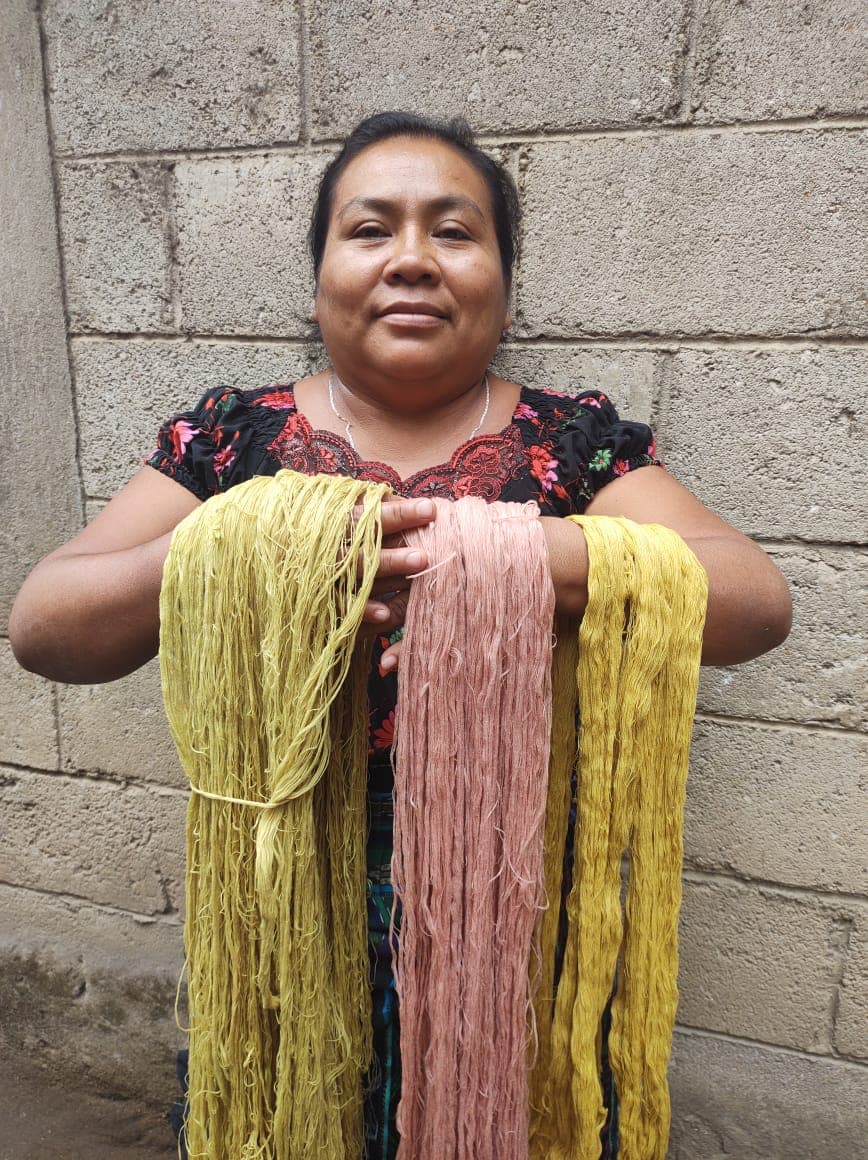 When Juana got married, her father-in-law, who was an artisan and was part of community project management groups, invited her to take part in a training session on natural dye extraction techniques coordinated by JICA (International Cooperation Agency for Japan). Before that, Juana had only heard from her mother that in the old days, when clothes were discolored, people would recolor them themselves, but she didn’t know how the process worked.

In 2006, Juana and her family decided to start their own textile craft business. All of her products are made with natural dyes extracted from different natural plants, barks and seeds, including chilca, avocado seeds, pericón, purple onion and much more. Juana and her family have kept the knowledge and techniques of weaving in the family and through the store they pass them on to all those interested in learning them.

Juana says that she prefers to use natural dyes because they do not pollute the environment and comes from an ancestral process that should not be lost. Juana always works hand in hand with her family, although it is her 20-year-old daughter Marly who accompanies her during all the processes, from the beginning to the end.

Marly Mendoza graduated as an accountant from CEIMATZ (Centro Educativo Integral Maya Tz’utujil) in San Juan la Laguna, but due to the lack of employment opportunities in her profession she decided to follow in the footsteps of her mother by working with natural dyes. Marly learned to work on the backstrap loom and standing loom. She also learned from her grandfather the technique to make the ceremonial huipiles of San Juan la Laguna, a technique only known and performed by few people in the community. Marly is the third generation to make ceremonial huipiles. 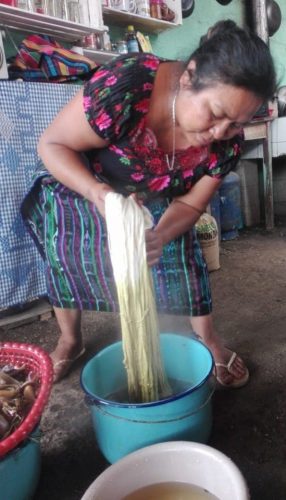 For Juana and her family, the fabric and natural dye have been the basis of her family economy that has been affected since the beginning of COVID, due to the lack of tourists who were her main clients when they visited the town.

Finally Juana says that the ancestral knowledge of the natural dye must be preserved and transmitted in each generation so as not to lose it because it is part of the Mayan history and culture. So, when there’s an opportunity, Dona Juana and her family invite us to visit her at her Mayab’keem (Mayan Weaves) handicraft store to learn or appreciate the art of weaving and natural dyeing. In the meantime, if you want to buy some of the products made by Juana’s family and support the community’s economy, you can visit the OG Marketplace store.

In collaboration with Operation Groundswell and the Hub, Juan will also be offering a natural dye virtual workshop where she’ll show us how to extract colour from common plants and apply them to a piece of clothing.

The event is being held on Tue, April 27, 2021 from 6:00 PM – 7:30 PM EDT. Spaces are limited and all proceeds go to Operation Groundswell’s Community Contribution and Emergency Relief Fund. You can sign up to learn and laugh with Juana using Eventbrite here: https://www.eventbrite.com/e/natural-dyeing-workshop-with-juana-mendoza-tickets-150641543913 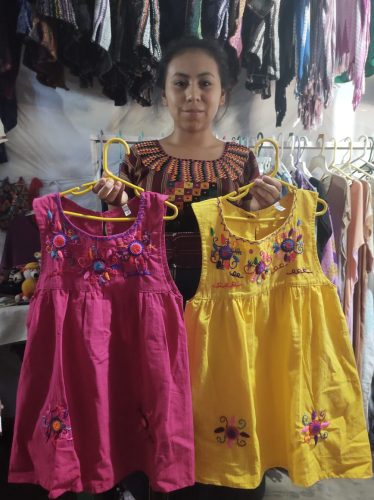 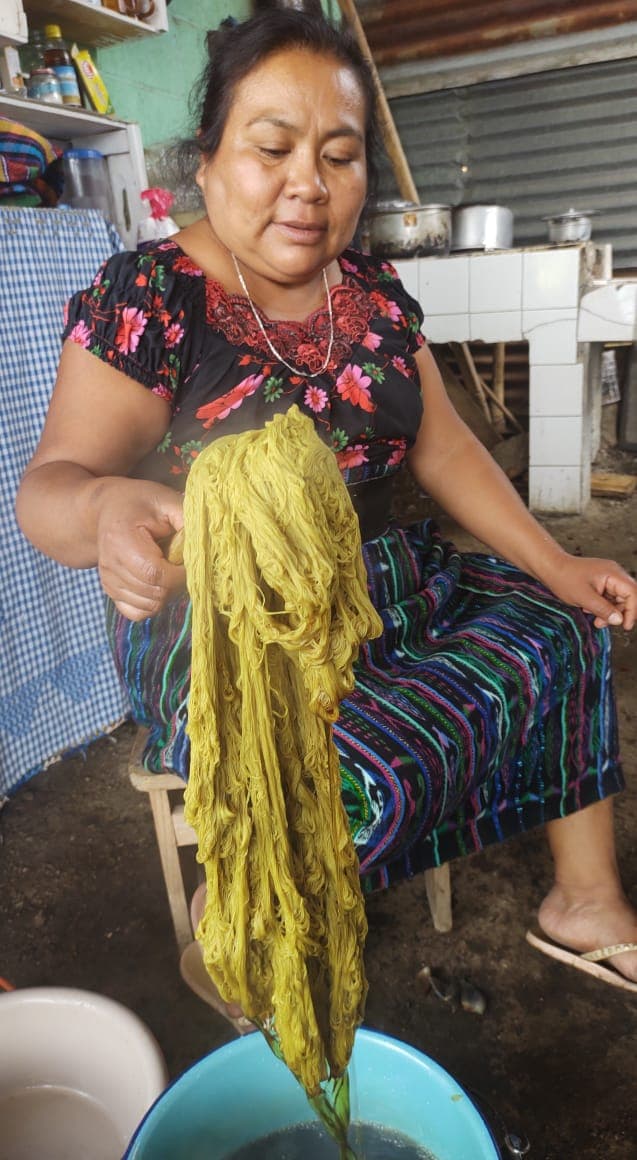 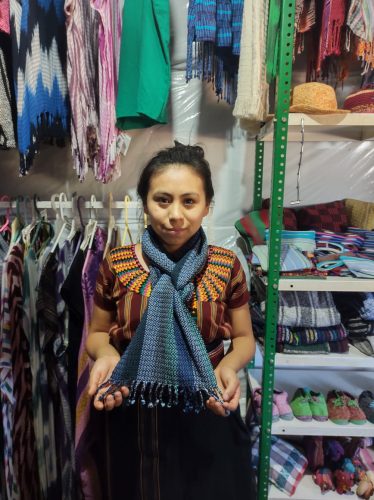