Posted at 14:26h in West Africa by Operation Groundswell

It’s been two weeks now since we arrived in Accra, but with the ground we’ve covered it’s hard to believe we’re still on the first third of our trip. I have to say, I have learned more during our second week in Accra than I expected to learn throughout the entire trip. 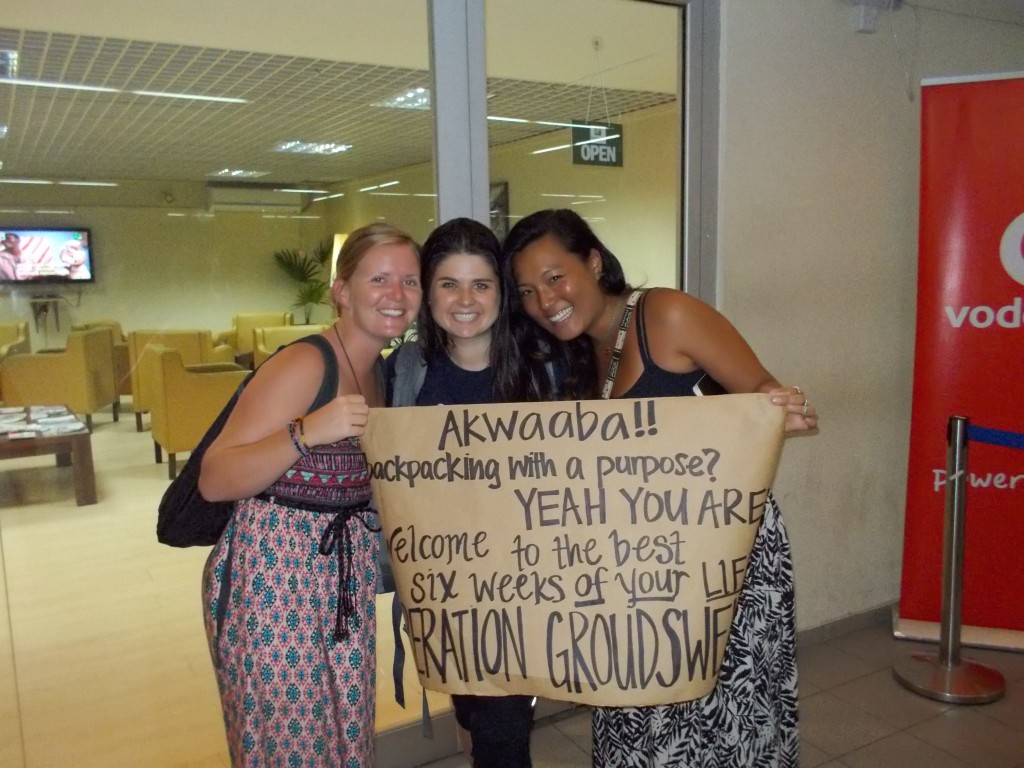 Our return to Accra was in stark contrast to the orientation filled with hikes, games and bucket showers in Wli. Sure, we upgraded to running water at Mama Tina’s guesthouse, but conditions were much less fortunate and the vibe was solemn as we spent the day walking through Accra’s largest slum, Old Fadama. We were incredibly lucky to have a guided tour led by the liaison between the Old Fadama Development Association (OFDA) and Slum Dwellers International (SDI). Though it was technically a “developed” slum with standing structures and makeshift electrical systems, I was undoubtedly overwhelmed. By the smell. By the pile of waste in the lagoon at least two stories high. By the way it never ended every which way you looked.

After the tour, we sat down with the administrators of the OFDA who all grew up and lived much of their lives in the slum, themselves. They explained how they are in a stalemate with the government, who will not open up a dialogue to discuss the possibilities of developing a sustainable economy and residential area in Old Fadama. Despite the fact that many of the 80,000 people living in the slum were displaced by violence in the upper regions, the government wants to evict them because it’s technically an illegal settlement. The issue that hit home for many of us was that Korle Bu, the largest hospital in West Africa, sits directly next to the slum and yet the residents of Old Fadama don’t have the means to seek treatment there. Despite these grim conditions, we were warmly welcomed by everyone, and even got a taste of fame when we walked into a kindergarten classroom and the kids chanted “Obruni! Obruni!” (foreigner/white person). 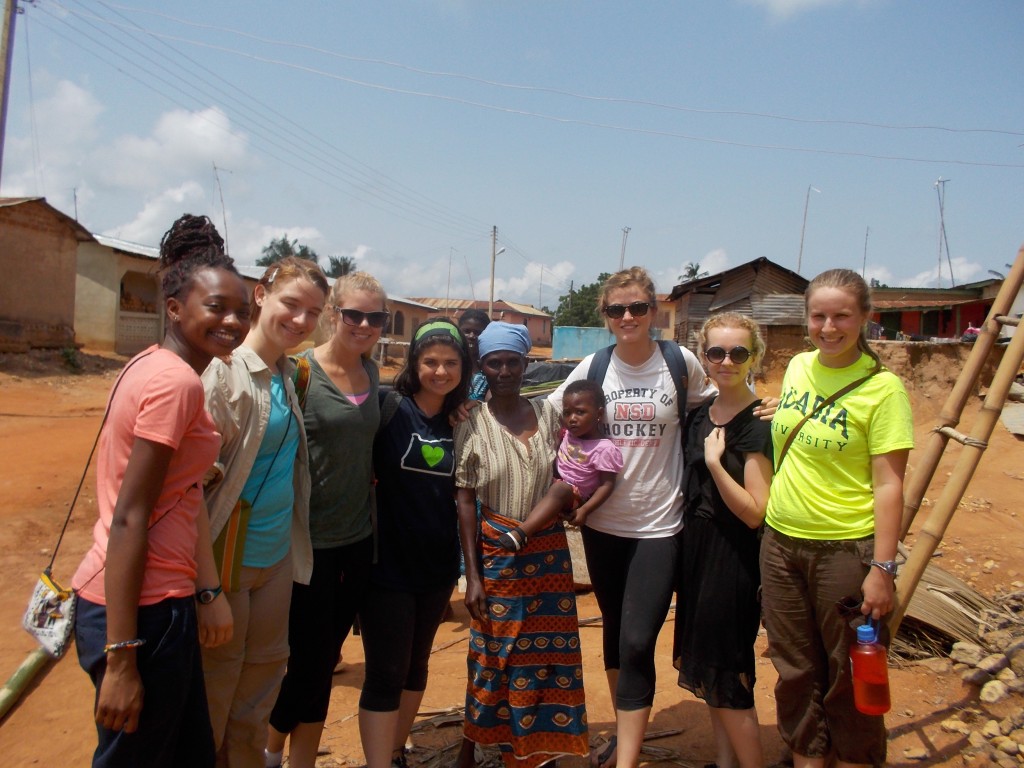 We also had the opportunity to meet with the Health Coordinator of the Presbyterian Church of Ghana. He taught us how the public health scheme works through the government, and how the government works in conjunction with the church to bring more hospitals to different areas of the country. The Presbyterian Church has also established several nursing schools, education outreach programs, midwife training schools and a mobilized maintenance unit for medical equipment. The church turns no one away, helping pay for treatments and insurance for those who cannot afford it.

Despite the progress that has been made, however, mental health units are rarely found in hospitals due to cultural beliefs and stigma. As a psychology major, this is something I found disappointing and something that personally hit home for me. In the meantime, the focus right now is getting more funding to continue hospital construction in rural areas, where treatment is almost inaccessible.

With the information we learned from the first two visits, we dove into our first real medical setting at Korle Bu the next day. We went on a tour of the Children’s Hospital, which raised some troubling questions but also exceeded our expectations in many ways. Korle Bu is a teaching hospital; it’s well-staffed and always filled with medical students helping out, which is definitely not the norm in Ghana. Regardless of the abundance of well-trained doctors and nurses, knowledge of equipment maintenance seemed to be a big issue, as well as the congestion of regular cases like malaria in what should be a special cases hospital. Other problems like lack of privacy weren’t actually problems at all, just a manifestation of the cultural emphasis on community support. We also got a sneak peek at the beautiful new oncology and surgery units painted with flowers and bright colors for the kids. 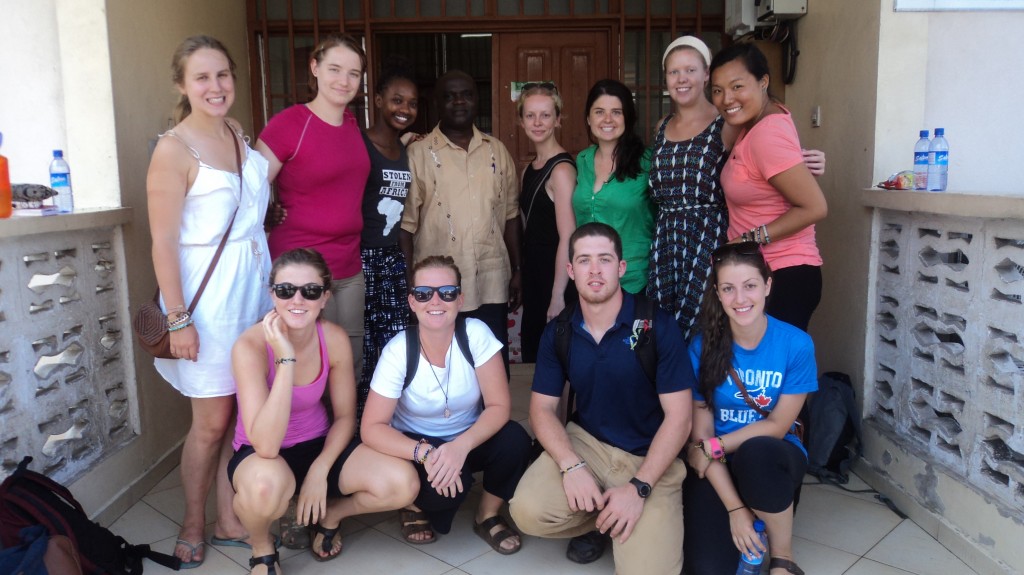 “Sooorrry” (insert Ghanaian accent) to bog this down with so much medical stuff, but that’s why we’re here, eh? …the Canadians are rubbing off on me.

Medical experiences aside, we’ve also managed to have an awesome time throwing ourselves into the culture. We had a scavenger hunt to find banku, fufu, red red and t-zed, among other traditional foods; we all tested our bargaining skills to get the best deal for some Black Star jerseys (maybe not all of us), and had a surprise drumming and dancing lesson with the professionals at Musika, which was arguably one of the funniest nights yet.

After wrapping it up in Accra, headed to Cape Coast for the weekend. A temporary power outage didn’t stop us from enjoying the Rice Master’s DELICIOUS fried chicken and rice, after which we received a private drum performance by some locals who invited us to join them for a bonfire on the beach. Cape Coast was super touristy compared to everywhere else we’ve been, and I’ll admit we participated in some touristy western-style dancing and indulged in a few too many Snickers bars (we can cheat a little, can’t we?!). 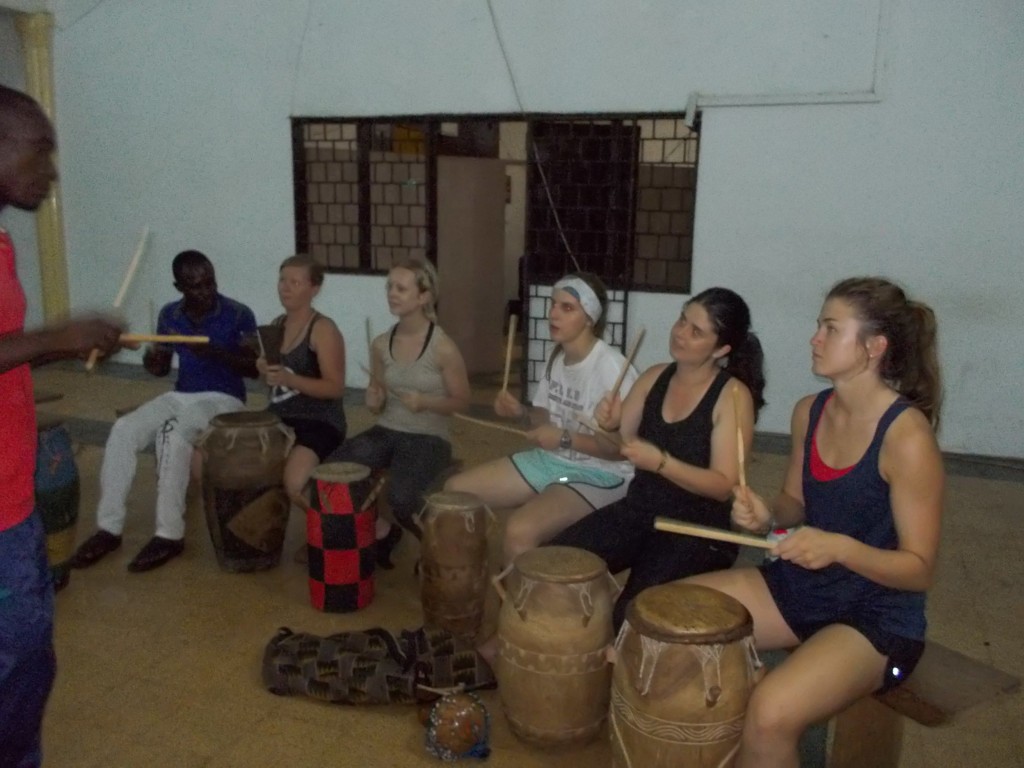 Our learning didn’t stop though. We also had a Q & A session with the founder of Health Protection and Environmental Sanitation and their current intern, a former Operation Groundswell volunteer. We even took some time to experience a bit of cultural history and visited the slave castle; an intense experience but a great additional to the already diverse knowledge we’ve gained about Ghana so far.

We’ve become closer as a group and these experiences mean so much more because of it – whether it’s singing “I’m a Barbie Girl” on a miserable tro-tro ride, suffering through a gnarly stomach flu or debriefing about a controversial health issue. I’m so grateful to be able to learn and grow with these people.  For every down I have, there is always someone to lift me right back up and have me peeing my pants laughing five seconds later.