Posted at 13:30h in Southeast Asia by Operation Groundswell

Wow!  This blog would have been up sooner but our group definitely needed a few days to recover from the incredible and intense retreat with Tiny Toones on Otres Beach.  We returned on Friday after 5 days of soaking up the sun, awesome games, and, of course, learning essential leadership skills.  The focus of this year’s retreat was leadership and team building and, by the end of the week, everyone was part of the Operation Groundswell-Tiny Toones (OGTT) family! 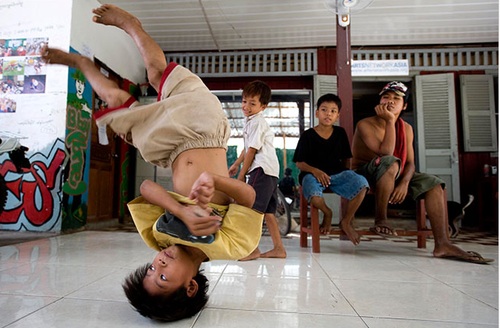 A glimpse of the kind of awesome Tiny Toones is all about. Photo by Stewart Isett of the New York Times.

We arrived on Sunday to start the retreat as you start any great thing: with delicious food. After devouring the food, we threw our mother’s advice out the window and went for a swim in the ocean.  Everyone tried at least one back flip into the swells of the sea, without a care in the world of who saw us.  Our aim was to cap the night off with some name games to introduce everyone before supper and socializing but that plan was thwarted by the darkness of night.  So instead of games, we bonded over food (not a bad alternative!).

We kick started the next day with the world’s most amazing scavenger hunt.  Otres Beach may not have a lot of things to see (just miles of beautiful beach) but we had our teams busy completing various challenges like building the best human pyramid, fitting as many people as possible into a small space, and catching as many crabs as possible.  Everyone did an amazing job with many hilarious and memorable pictures.  One group may have caught upwards of 20 crabs and when everyone is a break dancer, you get some fairly remarkable human pyramids.  As with the day before, many games were played and so much delicious food was eaten.

The third day brought everyone even closer together with a sandcastle competition! Absolutely stunning creativity was shown as our panel of judges was shown wonders from around the world.  The pyramids of Egypt, the glorious Angkor Wat, the Parliament buildings of Canada, and even a whale (complete with seashell teeth) were among the entries in the competition.  Food, ocean, and game time followed.  As a group we were introduced to a game called “Tom and Jerry”.  Everyone holds hands in a circle while there is one “cat” starting on the outside and one “mouse” starting on the inside.  The more rounds you play, the more cats you add.  If the cat catches the mouse, the whole team loses.  An excellent exercise to get everyone to work together towards a common goal.

On Wednesday we got down to some serious business with discussions in the morning and role playing scenarios in the afternoon.  In large and small groups we discussed the leaders in our lives, what made those people leaders, and the common qualities we had with them.  From there we talked about how the group–all of whom are leaders–could use their skills to make Tiny Toones a stronger team.  The afternoon brought some amazing games that truly exemplified cooperation. We worked together to line up by height, solve the human knot, and use our bodies to make elephant…all without speaking a word!  Afterwards, everyone had a fun time acting out different scenarios that gave them the opportunity to act like real leaders.

After the exhausting day of discussion, everyone relaxed on the beach.  Some swam the ocean while others went to town to get long-desired goodies like peanut butter and Pringles.  That night brought a huge dance party, many games of straws (spoons but with more cheating), and an impossibly high number of group photos.  While the level of English comprehension of the Tiny Toones crew varied, everyone seemed to know the phrase “One more photo!”  Promises to stay up all night were quickly broken as everyone realized every night had been a late night. Everyone was up nice and early for our bus home.  One last look at the beach and away we went!

Our Friday night in Phnom Penh passed with little upset as most of the girls needed to catch up on sleep (except for a small group of insane ones who went out on the town… AGAIN).  Yesterday was our last day as a group and the stars must have aligned.  After giving a well deserved free morning to the girls, we attended the massive Naga World Concert where we all got to watch Tiny Toones perform.  Afterwards, as fate would have it, the Khmer-American deportee and spoken word poet Kosal Khiev was hosting a fundraiser before he headed off to represent Cambodia in London as a cultural olympiad. 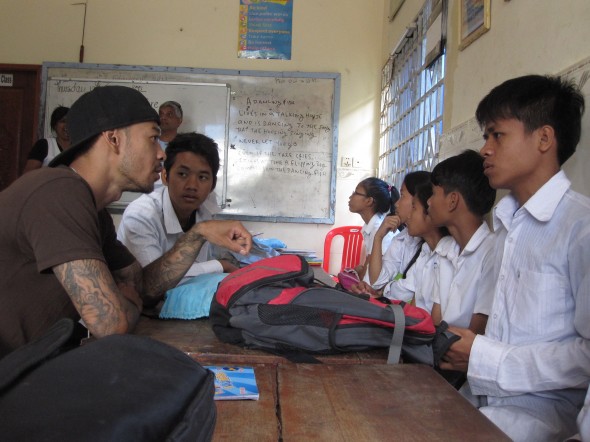 Culture was rich in Phnom Penh that Saturday night.  Even though this sounds like a full day, the group still wasn’t finished.  We attended a huge BBQ with Tiny Toones and all the friends we’d made along the way in attendance.  After the BBQ/dance party, we headed out to the clubs for an even bigger dance party (we looooove dance parties!).

The group starts heading out today.  We’re already down two people and everyone seems a little more glum that the journey is almost over, even with the excitement of Independent Travel Time (ITT) on the horizon.  For ITT, we have girls going to the Philippines, Laos, Southern Cambodia, and Southern Thailand for what sound like amazing adventures. In 10 days time, we’ll all be meeting up in Kanchanaburi for a very relaxed disorientation.

In the meantime, we’ll all be busy having our own individual adventures!

Oh and Emma says, “Hi Mom!”.  Apologies for the long blog and the random nature of that comment, but she’s been gunning for a shout-out since day 1.