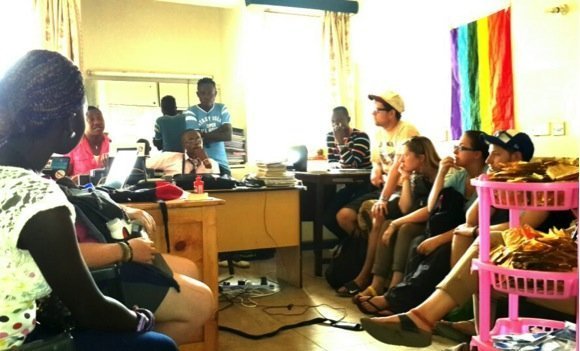 Posted at 15:11h in East Africa by Operation Groundswell

We spent twelve days in Kisumu town, the third largest inhabited area in the country. While working closely with our partner, the Young County Change Makers (YCCM), we had the great opportunity to meet with a LGBTQI group called Men Against AIDS Youth Group (MAAYGO).

Homosexuality is illegal in Kenya and largely a taboo topic in East Africa, so it was a very special opportunity to meet with an HIV/AIDS LGBTQI activist group and hear about the project’s development.

MAAYGO was created in 2009 by a group of men who realized that no one was talking about how many members of their community were dying of AIDS or complications due to HIV. Moreover, people in this society often lie about the reasons their family members or friends have died in order to hide the shame and stigma associated with HIV/AIDS. Deaths of HIV/AIDS are often inaccurately documented because family members habitually list the cause of death as an “illness,” such as malaria fever or typhoid fever rather than AIDS. It is easy to see how strong the stigma and shame is associated with HIV/AIDS.

From our perspective, MAAYGO is a revolutionary movement, combating copious amounts of hatred from members of the community. Because of this, the members have had to move locations four times since they began the organization due to vandalizing and aggressive raids by the community and even the police.

Access to contraception here in Kenya is very difficult, as condoms and other forms of birth control are very expensive and hard to find within communities. MAAYGO attempts to supply both straight and gay people with lubricants and condoms to encourage safe sex, in order to prevent the spread of HIV/AIDS along with other STIs.

MAAYGO looks to create a space for LGBTQI, sex workers and the partners of these people in order to foster dialogue around safe sex, education about HIV/AIDS and coping management when diagnosed. Unfortunately, MAAYGO has to hide the part of their group that focuses on gay activism, thus using HIV/AIDS as the main focus of the group in order to keep the members from being arrested. Moreover, the group is in the process of changing the name of the organization in order to be more inclusive of the entire LGBTQI and straight community affected by HIV/AIDS.

It was a difficult yet inspiring experience to sit and talk with this group of passionate men. With many of us closely affected by STD/STIs in our community and identifying with the LGBTQI community at home, it is hard for us to imagine life to be so isolated with insurmountable shame for our sexual identities.

With no LGBTQI support groups for youth in the area, MAAYGO also attempts to work with this community. It is a challenging struggle for the members to work with youth because the age of consent is 18 years and older and members of the community have accused MAAYGO of “converting” youth to be homosexual. Thus, the organization has to be very careful when working with LGBTQI and HIV/AIDS affected youth. Sadly, young people are heavily affected by this issue and often find little to no support elsewhere.

Coming from Canada and the U.S., it was quite shocking and difficult to experience the troubles of the activist group. Many groups in Canada and the U.S. target both youth and adults concerning these issues. It was most difficult to hear that the men felt as though they would only see the light at the end of the tunnel in a minimum of twenty years. Likewise, it was discouraging for the team to hear the men express how they do not think they will see grand effects of their project in their lifetime. At the same time, it was extremely encouraging to meet a grassroots project that was making an impact on the community one person at a time with such an important cause that affects so many. We left the meeting with optimism that this group of motivated, passionate men would make a lasting impression on their community.

If you are interested in learning more about MAAYGO, or supporting the grassroots organization, visit their Facebook page at www.facebook/maaygomsmkisumu.