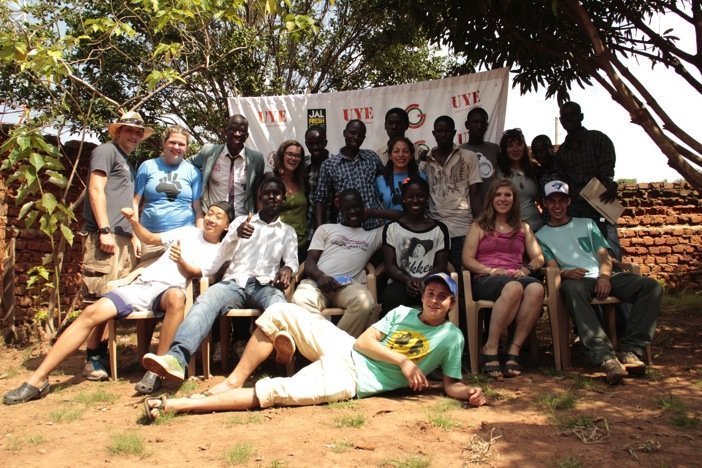 11 Aug Leaving Our Mark from Jinja to Gulu

Posted at 10:49h in East Africa by Operation Groundswell

After a short bus ride from Kampala, we arrived in the beautiful town of Jinja for some relaxation and adventure. Our days were fun packed with rafting intense class five rapids on the Nile and a few dare devils even took a leap of faith bungee jumping 45 meters head first into the Nile river.

One of two OG rafting teams battling the Nile. Photo by: Adrift Lodge

Michaela’s bungee jump and a touch of the Nile. Photo by: Adam Darell.

After our mini vacation we took a bumpy, chicken infested bus ride to the colourful and friendly town of Gulu. The night we arrived, the whole gang went out to celebrate Linda’s birthday. We had a blast tasting local beers and Waragi-Uganda’s finest gin, while dancing the night away with locals to some classic Ugandan jams.

In Gulu we met up with members of United Youth Entertainment (UYE) at the local art centre, Through Art Keep Smiling, (TAKS), for our third project. With this talented group composed of painters, actors, directors, and art enthusiasts, we partook in a thrilling drama workshop led by the inspiring Ife Piiankhi. Later that night we helped put on an art show/premiere for UYE’s latest film, Crying for Help, which was funded by the previous OG group. There was singing, traditional and contemporary dancing, hip-hop, visual painting, traditional instruments, body painting, and poetry. (Shout out to Vanessa for killing it with her powerful, beautiful and touching spoken words). Overall, the night was a good time and large success.

UYE and OG celebrating the success of the grand premiere. Photo by: Linda Ozromano.

The following day was spent creating a documentary about and promoting UYE. Ben and Michaela got the chance to interview members of UYE and UYE members got to interview several OG members. It was a great way to learn more about all the amazing things the organization had done and where they plan to go from here. Adam also shared his graphic design skills in helping put together a website for UYE with Daniel, Lamson, and Joseph. The documentary and website is still a work in progress, but feel free to check out what all they have done so far!

Our plans were unexpectedly put to a halt the next day because of the Muslim holiday of Eid, and we were given the day to discover and explore Gulu. The girls went into the market to get custom clothing made from local tailors, the boys walked around town and ate goat. Later we all hung out at the pool where we practiced our water acrobatics and basked in the sun.

We met later on at TAKS for a discussion about the Acholi culture, learning Lwo, and the conflict of Northern Uganda and the Lord’s Resistance Army’s part in the ordeal. We heard moving stories from Walter, Daniel, and Martin, and others about their experiences with the war and the effect it had on them and their community. Although the war took many things from the Acholi tribe, it did not take away their passion and motivation to express and share their talents with the Gulu community.

On our final day in Gulu, we took a bumpy ride on the back of a truck to the outskirts of Koch Goma to do some farming with the Concordia Volunteer Abroad Program (CVAP) team. We spent the day planting maize on a five acre plot under the blazing Ugandan sun. Afterwards we ate fresh nuts and took a walk through some of the surrounding farm lands. We made it back just before it started pouring. They said a decent rain after planting is a good sign. Hopefully all our efforts will soon be rewarded with plenty of corn to feed the mouths of the little ones at St. Jude’s orphanage. After a long day we winded down by going to Gulu’s local talent show. Once again Vanessa blew the crowd away with her free styling.

Bumpy ride back after a long day’s work! Photo by: Linda Ozromano.

We all had a fantastic time in Gulu and it was hard to leave. We came away with new friends, beautiful artwork, and a new perspective of Uganda.

Now for to the trek back to Kampala to meet and work with the Kids Club Kampala!