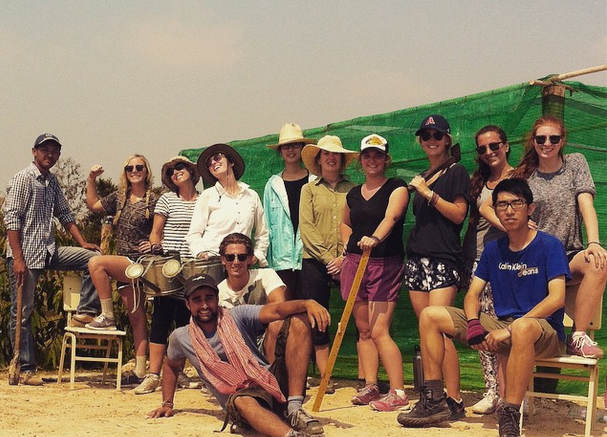 Posted at 14:27h in Southeast Asia by Justine Yu

Stop three of the Cities and Sanctuaries journey took us to Moung Russei district in Battambang province, and a four night stay at the Ockenden Permaculture Education Farm (PC farm).

We composted, mulched, tree planted, hoed, dug holes, built fences, and carried huge tree trunks, heavy watering cans, and wheelbarrows of poop – lots of poop. The world of permaculture turns on an axis of water and manure so a large proportion of our time was spent shovelling poop. 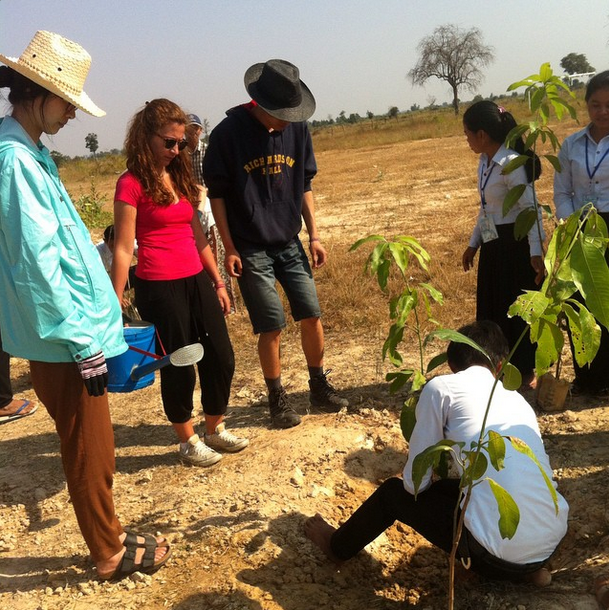 Ockenden Cambodia has an agricultural focus and does a wide range of work including micro-credit lending, livelihood improvement and food security, best practice farming, capacity building, and land rights advocacy. The PC Farm is also home to the Ockenden Cow Bank, where local farmers can lease a cow (a core asset), care for it, and are then able to keep the calf for future sale and finance. The small herd of Brahmins with their big pretty ears and scratchy tongues were our constant source of fertiliser.

Our friend (not teacher, as he insists) Sokha was our host and permaculture guru. Though he is studying to be an accountant, his real passion is agriculture and has pursued a career with Ockenden, learning and teaching the practice of Permaculture across Cambodia – permaculture agriculture is an organic, holistic approach to farming that seeks to mimic nature’s patterns and capacities. Sokha mentioned that he spent a whole year observing what would eventually become the PC site, its weather patterns, the direction of water flow, the wind and the temperatures before commencing any building or design.

Sokha tells us that traditional farming practices were by nature organic and diverse, but that a combination of export pressures, foreign investment, the introduction of chemical fertilisers, and monetary incentives (including a drop in the price of rice) have overridden that knowledge. Convincing the current generation of the benefits of permaculture farming and soil rejuvenation is meeting stubborn resistance, sometimes due to plain scepticism and sometimes due to necessity – the farmers are very poor and the concept of investing in rehabilitating the land at the expense of producing crop is incomprehensible. He says that no one has any patience anymore, and permaculture is slower to show its rewards.

The region we were in was surrounded by dry, dusty, desolate looking cassava plantations – a crop that is processed into flour to be used for noodles and bread exported predominantly to Thailand. Ironically, Thailand has ceased its own cassava farming due to the environmental degradation the crop causes. Our first lesson, to contrast this backdrop, was composting. We used food scraps, collected green matter from the water hyacinths growing in the pond and branches from the forest, to layer with cow poop and then dry rice husk. The richness this produces was in direct contrast to the sandy dry soil we drove past every day.

We all slept together in an open air hut with a roof of woven leaves. We woke each morning to the cold of dawn and sunrise. The raised wooden plank platforms covered with a thin woven grass mat were a test of discipline for all of us side sleepers. For the first time on the trip we needed socks and jumpers, and would perform a ritual cacooning in order to get into bed each night in preparation for the freezing dawn. We were fed and watered with vegetarian love and fresh fruit and very quickly developed a routine of eat, work, eat, nap, work, eat, fire, sleep. Our days were split into two – morning work activity, lunch/nap, and afternoon activity.

Our first full day we crammed into the Ute (aka pick-up truck for non-Australian readers) and bumped and potholed our way to the local high school for a tree planting activity. We planted hardy mangoes, coconuts, and shade trees. What felt like the entire student population was enthusiastically ready to help – leaving us Barangs (literally translates to French person but is used to mean foreigner) to pretend like we knew what we were doing – everyone eventually found a rhythm of their own. Some mastered the art of delegation, some made new Facebook friends, and others had a hard time convincing the local boys to let them do any of the heavy lifting. The kids ranged from about 15 through to 20. They explained that it was very expensive to go to school so they had only now saved the money to attend. Their English, along with Cambodia more generally, was really good. Another Cambodian specialty is volleyball. The boys’ team changed into their yellow playing shirts and challenged us to a game. We were no match. 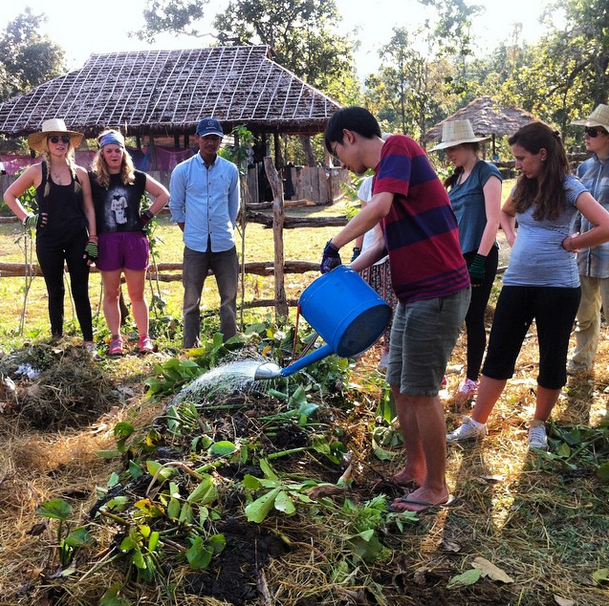 Post marvellous nap, we visited one of the three model farms that Sokha has been coaching. We planted eggplant and watermelon and were thanked for our work with fresh coconuts to drink. This farm is the only participant Sokha has been able to convince to implement a drip irrigation system, a method he learned while visiting Australia. Whilst washing our hands in the well, Hannah’s sunglass slipped off and disappeared into what seemed to be a bottomless pit. When the farmer confirmed that it was if fact only one metre deep he rushed to grab the closest of his grandchildren whom he lowered, fully clothed, into the tank to swim around and retrieve the glasses. It was equally hilarious and worrying as this poor kid ducked up and down, especially when his first triumphant retrieval was his hand wrapped around a chopping knife that had long since been missing! Glasses retrieved, hosts thankful to have been able to help, we bumped back to base for dinner.

The second day was a visit to the local Primary School to erect a shaded nursery and fertilise the saplings that had been planted by a previous OG team last year. Construction not being a job for the littlies who wanted to help, OGers occupied them with a fun game of ‘pick up the rubbish’ and ended the afternoon with a much more fun game of soccer.

Post lunch and nap we headed to visit a second model farm and collect snake beans for our dinner. This farmer was fetching a high price for their organic produce and the rotational cropping was bringing in income throughout the year rather than just one cassava payment per year. The treat that afternoon was at a coconut nursery farm whose Om (Grandmother) showed us how to make three different sticky rice sweets – it was so good. She let us fold a couple of the treats in the banana leaves but then had to take over the process so we didn’t muck it up and ruin her sales the next day at market. We have vague recipes that we will have to attempt back at home. YUM!

We spent our third day on the PC farm hoeing, composting, mulching, and watering all the saplings on the property – a hot and sweaty task that precipitated a good three hour nap time. That afternoon, Sokha and his chuckling sidekick Dolah trekked us into the forest to visit a hill top shrine to get a view across the plateau. I saw my first Bodhi tree and we visited a well that the locals consider to be magical as it has never run dry. We were up in the Cardamom Mountains and were close to craters caused by USA bombing missions during the 1970s. We would have gone looking but Sokha wasn’t confident of the route and the risk of landmines off the path is still a real threat.

We spent our final day on the farm building a fence along the border of the property. There was heavy lifting of tree branches and logs and excessive hoeing. The guys from the agro forestry group came to help out – you’ve never seen fitter old blokes!

Our reward on the last night was a party with local community members, the agro forestry crew, wives, and local farmers. There was a band playing traditional Khmer music, an enormous bonfire, and for the first time all week meat! The BBQ was complemented by a special PC-farm exclusive concoction known as language juice (you have to visit to learn what it is). Dancing around the bonfire with lots of clapping, whooping and shoulder action was the perfect send off to a week of hard work, hard realizations, and hard beds.