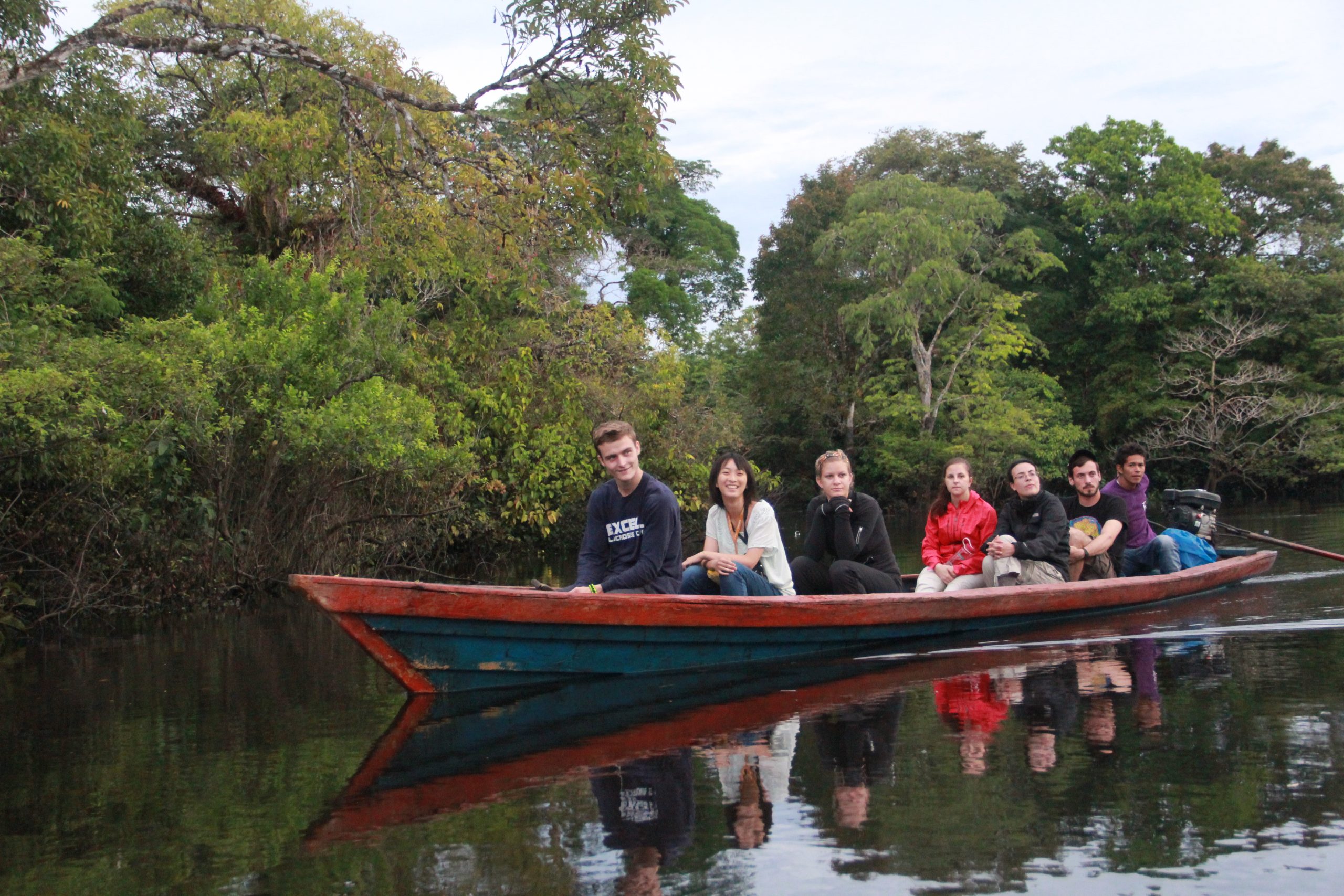 24 Jun Lord of the Gringos: A weekend deep in the Amazon

Posted at 15:59h in South America by Operation Groundswell

Howdy, y’all, Connor here to bring you the next section of our scintillating series! So grab your reading glasses and your scotch glass(es) (optional, but definitely recommended) and prepare yourself for the next installment of the Lord of the Gringos Amazon Adventure!

We had been working in Pampachica for a couple of days, sawing boards, nailing boards, sanding boards, painting boards and all other sort of board related activities and although everyone on the trip was stoked to continue doing such important work we had become slightly board. So, for a nice change of pace and to gain a little appreciation of the majesty of the rain forest our fearless leaders thought it would be a good idea to go as far down the Amazonian rabbit hole as it would take us.

So we took a small break from our community-requested projects and ventured off to the riverside town of El Chino, set in the area of Tamshiyacu-Tahuayo, a protected section of the rainforest. Basically twenty years ago the locals were fed up with people going into their backyard and logging and fishing in excess. Instead of waiting for someone to step up, the community banded together and blockaded off a region of the river so that no outside force could go into the deep rain forest and poach off the Amazonian bounty. They gathered a lot of support from the local community and eventually the government, so now this region so deeply set in the rain forest is on the road to recovery. It is an inspiring story and the village is a quaint showcase of how life can continue with minimal impact on the environment. 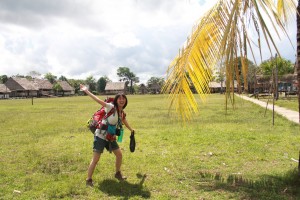 It is a quiet town comprised of thatched roofed houses on stilts surrounding a massive quadrangle that serves as the towns soccer pitch. At first look the population seems to consist mainly of chickens with the occasional rooster, however there are wonderful people there who are very concerned about the wellness of the rain forest and its preservation. We stayed in one of the founding members of the conservation group’s lodge with his family. A beautiful lodge full of life, unfortunately mainly of the insect variety. 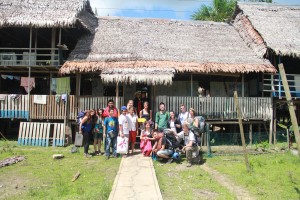 We spent the first day trying to find sloths and dolphins while learning more about the conservation efforts that Carlos, the oldest, and his family were performing in his riverside town. After getting settled in, having a little rice and beans, we hit the hay and awoke with mostly fresh faces (at least the ones who managed to avoid the mosquito menace). We split into two groups to go on a jungle trek. 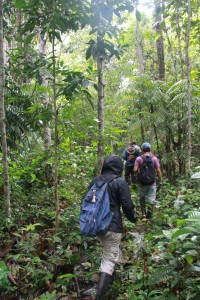 Unfortunately I had been ‘on the run’ for a couple days and couldn’t participate in the more physically demanding trek, but even then I got to see a large striped groundhog creature who I cant remember the name of (Majas, says Mikel) and some small flying ostrich. We saw butterflies, ants, and other entomological critters. The other group saw some simians and various jungle beasts. 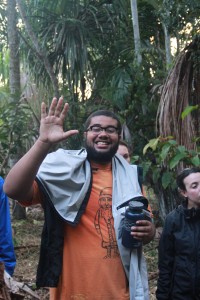 In the afternoon, after some rice and beans, we went to see the medicinal plants the shamans or healers would traditionally use. From headaches to yellow fever, these tiny plants prepared in the correct manner had the potential to cure all sorts of illness. The matriarch of the house was somewhat of a witch doctor herself, although she would never admit it, and had helped numerous youths that could not reach a hospital or could not afford to go to one. When we got back we had the idea of telling ghost stories for Friday the thirteenth but the day had wiped many people out, including myself, so we set out to sleep. 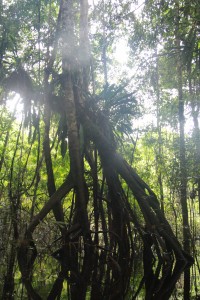 The next day we went fishing. It was father’s day and it was touching that they would still continue with the jungle trek even though technically should be celebrating with their family. Although we were unsuccessful in spearing or catching 10ft Amazonian river monsters I personally had an amazing time paddling between twisted trees of convoluted shapes, the sun poking between vines and leaves, casting fractalized patterns in the dark water. Oh, and chucking a 6 foot, three pronged spear at fish smaller than my hand. We went to a hidden lake and swam around in the warm water trying not to think of how juicy and succulent my toes must seem to the toothed nightmares surely lurking below. 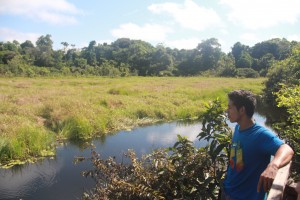 In the afternoon, after rice and beans, we played soccer with the locals who take the game a hell of a lot more seriously than any rational person should. The field consisted of mud with patches of grass in between and before long everyone was covered in the sludge. A hilarious time though, I loved trying to sprint through the slick muck while deeking out Peruvians and trying not to fall over my own rather large and cumbersome feet. A quick dip in river, the Argentinia/Bosnia world cup game (Argentina won 3-1) and a few beers later and we ended up telling ghost stories back at the lodge before mosying over to the house that served as the bar. We introduced Carlos to a variety of games and after getting a little bit silly we drank up and nodded off. 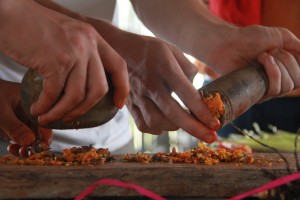 In the morning the artesian of the community showed us their hand crafted wares and how they were made. Roots, ferns and a variety of berries are taken from the jungle and either mashed, cut or boiled (sometimes all three) to produce vibrant colours. These natural dyes would then be soaked in a fibrous plant stripping and woven into baskets and bracelets. In addition to bracelets and baskets, there is a wide assortment of sculptures and fish bone knives. These women spend days preparing these wonderful crafts and although it may seem gaudy and not immediately useful to the western mentality they are beautiful works full of charm and character. 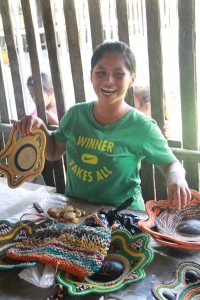 It was now the time to leave El Chino. We loaded up our gear, swatted our last mosquitos and said our final goodbyes. I think everyone was sad to leave El Chino, although admittedly somewhat grateful to return to civilization. We had all spoke to each other about seeing the ‘true’ rainforest at one point or another, if such a place actually exists. Now that we had tasted the rice and beans, seen the beautiful vistas and gained an appreciation for the Amazonian way of life, I’m certain that we will never trivialize its importance in our daily lives.