Posted at 15:45h in Southeast Asia by Anna Cunningham

In March 2017, Operation Groundswell spent a day working with Ockenden Cambodia on the farm of Mr. Phle Song in the rural district of Mongkol Borey, Cambodia. We learned how to make raw sugar from both sugarcane and palm oil, but the highlight of the day was listening to Mr. Song’s story. About two-thirds of Cambodia’s population is younger than 30, so it was an incredible opportunity to spend time speaking with an elder. Below is an edited account of what he shared through a half hour of Q&A with our group, translated in real time by our friend Nharn from Ockenden, and supplemented with some background information for historical context.

For fifteen years of his life, from 1955-1970, Mr. Phle Song was a practicing monk. Many young Cambodians enter the monastery at one point or another, for a variety of reasons, and they have the choice to leave when they desire. Mr. Song, however, was forced to leave. During the beginning of the communist regime, known as the Khmer Rouge, in Cambodia, the government cracked down on Buddhism and other religious practices, which meant that the monasteries were disbanded, leaving Mr. Song with no choice but to leave the monkhood.

As the Khmer Rouge grew in power, they began to violently implement their vision of transforming Cambodia into a peasant state by relocating people to collective farms, which were effectively forced labour camps. The vision was for the country to be a classless society of farmers, with no money, no private property, and no traditional culture. “Lawyers, doctors, teachers, engineers, scientists and professional people in any field (including the army) were murdered, together with their extended families. Religion was banned, all leading Buddhist monks were killed and almost all temples destroyed.” (source)

Mr. Song was almost killed because of his education in the monastery and his background as a monk. His life was spared by a top level man of the Khmer Rouge, who said if they killed him they would have to kill many generations, because his name, Song, indicated his large extended family.

Life proved difficult in the years following his exit from the monastery. Mr. Song became a farmer, but did not know much about agriculture. He had no children, so he could only rely on himself to do everything necessary to live and survive. He learned how to farm through trial and error and by watching what other farmers were doing.

Eventually the Khmer Rouge forced him off of his land. During these times, people worked together and ate together, but there was never enough food. The regime did not allow people to eat enough. They gave out one kilo of rice per group of farmers to last an entire week.

The people of his community did not understand the purpose or goal of the regime. Later, they learned that the Khmer Rouge planned to kill the people of their village by inviting them to a neighboring community to dig ponds, which would have later acted as their graves. Luckily, Vietnamese soldiers arrived in 1979 and removed the Khmer Rouge from power before this plan was carried out. Other people around the country were not so lucky, as the Khmer Rouge had been committing genocide from 1975-1979, killing two million of their own people during this time.

Mr. Song resettled shortly thereafter, in 1979. At this time, people were spreading out again and reclaiming land, and he ended up on the very farm on which we were listening to his story. He used to have more land but gave some away to family who needed it.

Although they were able to settle and begin farming their own land again, the Cambodian people were not free from danger: the fighting continued for the next twenty years.

It’s hard to explain how difficult life was during the times of war. They had homes, but some nights they could not stay there. They would need to hide in the forest to escape the fighting. They were not just avoiding the ground combat, but they were also afraid of falling bombs, as both sides would attack each other from a distance.

The war in Cambodia officially ended in 1999. The current state of peace has allowed him to develop a stable life. Mr. Song survived the Pol Pot regime, and is now a beneficiary of Ockenden Cambodia. 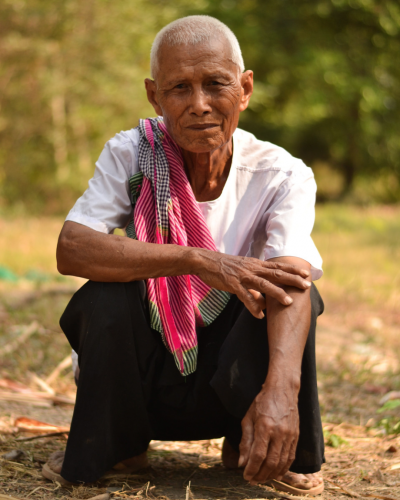 Mr. Song and his wife, Sam Bath, look after many relatives who are worse off than he is, feeding them and supporting their education. He has arranged weddings for his relatives who have come to live with him. When they get married they begin their lives with their new family. Some of them are now working in Thailand, and they send back money when they can.

Mr. Song himself spent four years working in Thailand, from 2000-2004, as a guard for a television factory. He decided to return to Cambodia in 2004. He was earning better money in Thailand, but was not satisfied by the work he was doing as a guard. So, he returned to the more fulfilling and more demanding work of his farm.

Now he is happy. He has four ponds. He grows different kinds of rice, peppers, beans, sugarcane, cassava, and palm, among other crops. He raised 48 cows, but sold them all in 2014 for about $2,000 USD.

Since the end of the war in 1999, people are more free. They live without worry and without fear of fleeing their home from war. There is freedom of religion. The roads are safe and free of landmines. They can send their children to school to be educated. There are health clinics servicing the communities. They also receive support from the government and from different NGOs likeOckenden, which have offered training on how to increase crop yield. It is not as difficult as before. Life is normal.

In 2016, Mr. Song participated in the INDRA (Introducing Native Disaster-Resilient Agriculture) project with Ockenden. Mr. Song and his wife have received training on Permacuture principles, concepts, and designs. This training includes: fish, poultry, and crop production; tree planting; seed production; composting; and soil biodiversity in a holistic Permaculture design. Their farm is a model that can demonstrate a range of economical, storm-flood-drought-proof, and environmentally friendly living styles for future generations.