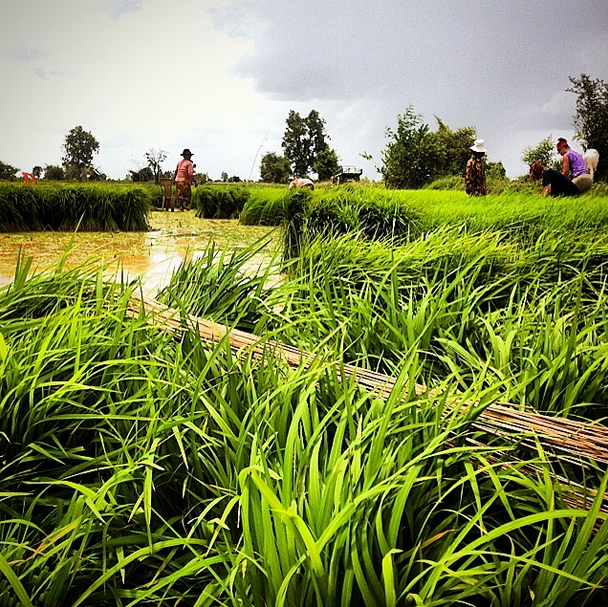 Posted at 17:43h in Southeast Asia by Operation Groundswell

We are on the road again! Headed eastward on Highway 5, we are all wishing the air-con was a little stronger, but are grateful our long legs fit into the seats this time. The honking bus is rolling through the flat and green countryside. Dotted with white cows and women planting the vibrant green rice fields, stilt houses with swinging hammocks and the occasional vibrant yellow roof of a temple catches our attention on one side, while to the left the Tonlé Sap Lake is creeping up higher and higher as the monsoon rains begin to fall. Next stop Phnom Penh, Cambodia’s capital city!

We just spent the last eight days in the province of Battambang, known as the rice bowl of Cambodia. Only recently has it begun to generate the attention of the more adventurous traveller who is looking to get off the main track of Bangkok to Siem Reap to Phnom Penh. Despite being Cambodia’s second largest city, it has a very mellow and relaxed flow. Strolling down the riverside, one is bound to encounter a karate class or two, a couple of dance classes or aerobics routines in the park. The side of the street is lined with food carts selling bottles of Fanta and Coke, sugar cane juice, steamed corn, and fried noodles.

Mount Phnom Sampeau is only a few kilometers outside of the city and a must see. It offers a spectacular view of the surrounding rice fields and a harem of monkeys eager to take some bananas off your hands. The sacred mountain is also well-known on account of being a stronghold of the Khmer Rouge, during the country’s civil war. The Killing Caves, where the Khmer Rouge murdered hundreds of people, is a somber reminder of the recent and tragic history of Cambodia.

As the Khmer Rouge continued to fight for Cambodia, they were pushed further and further north-west, until they were overthrown by the Vietnamese Army and Cambodian dissidents in 1979. Cambodia was largely isolated from the international community until 1991 and the prolonged conflict has left Cambodia as one of the poorest and least developed nations in Southeast Asia.

The north-west region of Cambodia was very heavily land-mined by the Cambodians, the Thais and the Vietnamese; it continues to be one of the most heavily land-mined regions in the world. Many Cambodians’ who fled during the war to refugee camps in Thailand returned to this region of Cambodia. It had the highest rate of returnees. These displaced peoples were returning to a home turned upside down by war. Although the war ended over 30 years ago, many of the scars run deep in the psyche of Cambodians. 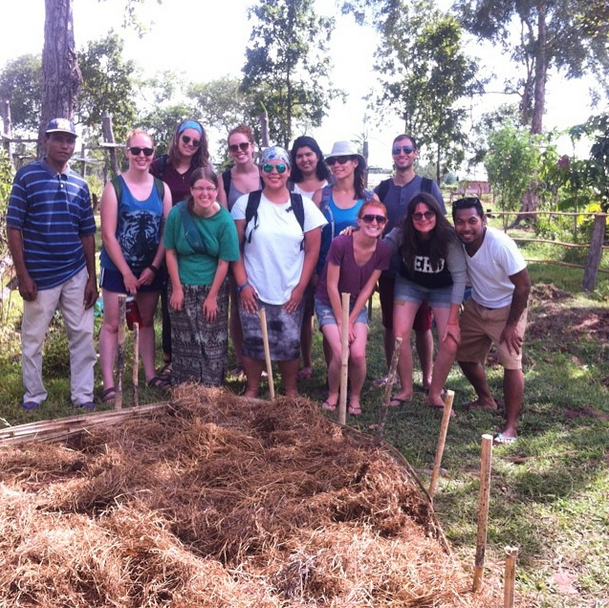 Ockenden, our next major partner in Cambodia, focused their efforts here. From 1997-2007, the organization has helped over 23,537 beneficiary families rebuild their lives after the traumatic experience and has become a well trusted organization within the Cambodian community. The organization has been Cambodian-run since 2007 and operates through a network of community-based organizations (CBO). Teuk Poh Permaculture Education Farm is one of those CBOs. They work on reeducating the farmers about sustainable farming practices, promoting methods for combatting drought and flood, protecting the community forests from illegal logging, and creating awareness amongst the next generation. We had the privilege of spending several days working alongside this dedicated group of individuals.

Much like camping, we spent several nights in our mosquito net tents under a giant grass roof hut. The bucket showers, a little on the short side for a few in the group, were constructed next to the banana trees for shade and opened up to the sky. The excess water from washing dishes and our showers all made its way to the grey water systems dug out around the farm. The two outhouses were connected to the bio-gas system, so we were able to contribute to the hard work of the cows that create the propane needed to cook our dinner. Nothing went to waste here!

We were given a crash course on creating compost piles – the lasagna of the earth. We learned about the cow bank, which helps create a safety net and a source of income for the local farmers. We watched Mr. Chen, a badass organic bee keeper, reach into a bee hive rubbed down with nothing but mint leaves, known as chee-ka-hom, and remove massive chunks of honey comb for us to try. No joke. We tried our hand at making some delicious rice, pumpkin and coconut desserts. Sadly, despite our best attempts, our desserts never quite made the cut under our teacher’s watchful eye. A few OGers declared them the most delicious thing they had ever eaten! As a dedicated program leader, I attempted to smuggle a few out. It was not as clandestine as I had anticipated. 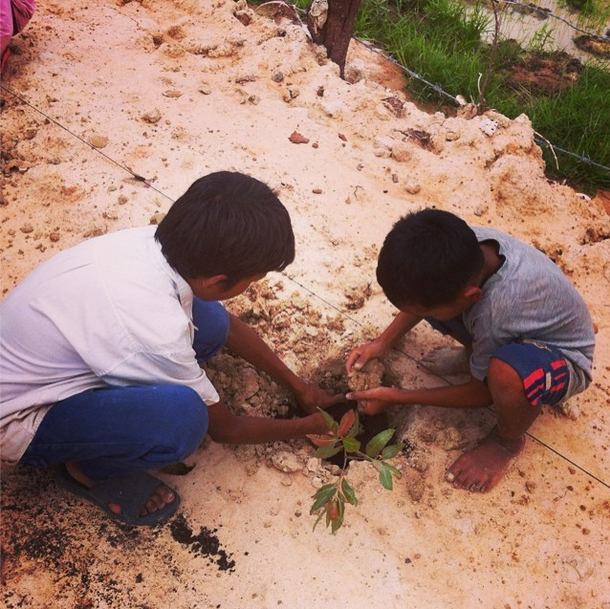 We scooped cow manure, made bamboo trellis, and finished one impressive peanut shaped raised-bed garden. The cow fence, defending all the treasures of the farm, was also redone during our time there. Last, but certainly not least, we planted over 300 trees in two days. The trees will be cared for by the new public school. Their playground currently resembles a desert. Their excitement to plant their first tree made the blisters very worthwhile!

To wrap it all up, we went to see an epic circus that blew the group’s minds with their agility, energy, and comedy. The Phare Ponleau Selpak Circus is a must see for anyone in Cambodia. It is the Cirque de Soliel of Cambodia, on a much smaller budget. The profit from the circus also helps support hundreds of other children at the center where they promote education, art and self-expression.

Finally, our unforgettable day with Samnang’s family! Originally from Cambodia, they fled the country during the war and immigrated to America. In the last few years, he has been able to get to know the other half of his family who stayed behind. They are a beautiful family with the same bright smile who have opened their home to us twice this summer. Samnang’s grandmother was reunited with her sister over Skype this time. They had not seen one another in over 30 years and were shocked at how grey one another had become! Surprise!

His cousins taught us how to make spring rolls with great patience as we continually ripped our rice paper, followed by a trip to the family rice field to try our hand at harvesting and transplanting rice. Foreigners rolling around in the back of a tractor had everyone laughing as we cruised through the village to check out the bat caves at dusk. It was a pretty awesome day, to say the least. 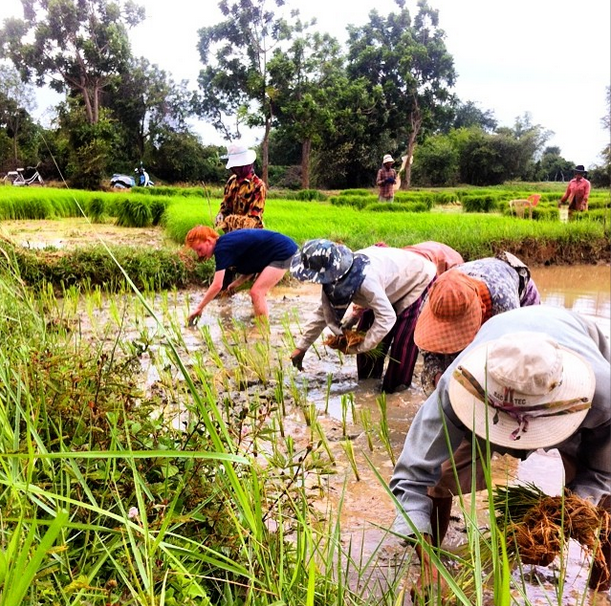 As travellers we are trying to redefine the way we see volunteering abroad. We try to focus on supporting existing and awesome CBOs. We let the Cambodians who work on these projects day in and day out be the ones to deliver the trees or the mosquito nets. We want to empower Cambodians to make the changes in their communities. We are simply grateful for the opportunity to experience their homes and country in such a unique way!

Being a volunteer is about giving your time and money to see a positive change. Needing to be the one who hands the poor child a loaf of bread in a slum or a mosquito net to a poor family is about easing our own privileged guilt, less about making long term change. Hanging out with the locals, planting trees, and learning as much as we can about this beautiful country and people is creating an understanding between worlds, which is critical to global change in the end.

It is hot. It is sweaty. We wear t-shirts and cover our knees in the heat. We eat rice for breakfast, lunch, and dinner. Yes, can you believe it? Rice for breakfast as well! And we are loving every moment of it!

Until next time,
2014 Southeast Asia: Cities and Sanctuaries