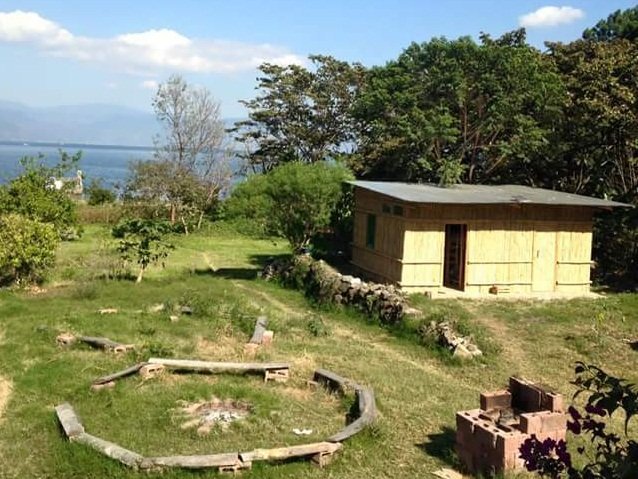 Posted at 21:13h in Hubs, Central America by Anna Cunningham

Spearheaded by Ben and now run by the wonderful Christine, the OG Hub in Guatemala is a small space in which large ideas take root. Thinking of the many issues in Guatemala, the Hub seeks to help show locals – not just tell them – different ways to tackle some of the many problems the country currently faces. More than that, the Hub seeks to learn from the local people; to create an environment of cross-cultural exchange and healing “un poco, un poco” at a time.

Upon moving into the land, OG started immediately addressing these issues head on, one being the often expensive and highly processed materials that are being imported, and which are bad for the environment. Using “lepa” (left over scraps from the sides of trees that are generally left unused when slicing lumber), they built on top of the existing structure that was left there. The result is a beautiful, earthy, and homey building housing both a kitchen and an office. A new addition to the land, using locally sourced material such as bamboo, was created by the Hub’s do-it-all handyman (and quite honestly, at this point, family member) Marcos. A cheap and environmentally friendly alternative to other building materials, the up-cycled bamboo structure is a place for incoming programs to stay and a testament to the ability to create homes that are both environmentally friendly and inexpensive. To add to the efforts in reducing their footprint, the Hub runs entirely on solar power, and a grey and black water system. Grey water comes from domestic use of water other than toilets (that would be the black water) such as laundry, showers, and the kitchen. This water is then recycled back into the land for reuse, such as irrigation, which severely reduces the demand for fresh water.

Regarding the use of black water, we can look at the concept of composting toilets, a new project that the Hub has started. One of the problems with composting toilets is how to create them in a way that isn’t seen as “icky” or the people using them seen as “dirty”. San Juan in particular lacks a proper sewage system, resulting in contamination and a high incidence of water-born disease, and while the promotion of health and hygiene can help with education on the issue, it isn’t enough to result in much change. Thus, OG has started building two types of composting toilets as sort of “beta tests” to provide local residents with an example of both functioning and environmentally-friendly options. The concept of composting toilets is not new; one of the prototypes being built has actually been implemented by Peace Corps all around the world.

In order for self-composting to occur without smelling absolutely horrid, it needs the right atmosphere and level of heat. However, the composting times needed for urine and faeces are actually quite different. Enter OG’s own composting toilet prototype, with a grill separating the two to ensure that everything is treated correctly. So what does one do with this new human waste fertiliser? For health reasons, you can’t use black water and human waste compost on just anything, but as long as you avoid putting it directly on food it’s a great alternative and way to reuse your own waste. One idea for the fertiliser posed by Christine is to use it on banana trees, which are great for “soaking up the bad stuff” without it affecting the fruit.

The next issue the Hub has taken on is Guatemala’s rate of malnutrition, the highest in the western hemisphere – a mind boggling concept when one considers the country runs on agriculture. However, due to the rise of monoculture, introduction of pesticides (and lack of proper education for farmers regarding safe use), and corporations like McDonald’s who appeal to the public as being “for the middle class” with their low prices, the people have suffered heavily. Many other factors come into play with this, such as severely low wages resulting in an inability to afford food with higher nutritional value, but these are some of the main factors in this challenge. Teaming up with several people and groups, OG lends some of its land to farm on under the condition that it all be organic.

Diego, a farmer next door, uses a small plot in the back to grow cabbage organically. You can often see him spraying his own crops with pesticides, but seeing the many differences in crop output and soil health, we hope he will eventually switch his whole farm to an organic system. A women’s cooperative, OMET, uses a separate plot of land to have their families grow a variety of food to combat malnutrition in their own homes. Although the first attempt with OMET’s plot was unsuccessful due to the dry season and lack of an irrigation system to get water to the area, with the arrival of the rainy season and a way to pump water to the land during dry season, there is optimism for the second attempt. They also use a separate area to house a medicinal herb garden in the tradition of the Maya, complete with lemongrass, basil, aloe, and much more. Lastly, a small plot has been created and is tended to by Erwin, combining permaculture with Mayan Cosmavision. The idea behind permaculture is to work with the land and crops together for a more sustainable and symbiotic relationship between plant, earth, and gardener. Ideally with a permaculture garden, it will be able to run on its own with little to no human intervention. The hope is that by showing people these ideas are not only good for the land but good for their diets, and doable without too much risk, more families and farmers will implement some of them in their own homes and practices.

Lastly, OG has another idea in fruition in response to the black bass that was introduced to Lago Atitlan as a tourist attraction before the civil war. The lake being incredibly large and deep, deep water fishing was initially a great idea to bring in more tourists, and therefore more money, to the surrounding area. However with the civil war, this obviously did not happen, and since bass have no natural predators they began to eat the local fish to near depletion. On top of that, there is a physical danger. Local fishermen use small canoe-like boats and a simple line and hook with their hands to fish, sometimes wrapped around a finger. If, or rather when, a bass gets a hold of it, the results can be as lucky as a broken line, or as severe as a lost finger. Queue the concept of aquaculture. This is basically small scale fish farming requiring no more then a 5 foot by 5 foot area that is only about 5 feet deep, which can house multiple ecological systems similar to those found in a lake. (Think something like a koi pond, only it has the ability to produce up to 50 lbs of fish protein per season.) This provides fisherman with an alternative and safer option to make their living, and while it doesn’t solve the black bass in the lake, it at least gives these fisherman a way to stay in business. The current aquaculture project is still underway, but hopes run quite high for it.

While these are only small steps, and these problems prevail throughout the country, they are steps in the right direction. By giving local residents examples of alternatives that work with minimal risk, as well as working on our own end to learn from them in turn, the Hub is a much needed space where the concept of cross-cultural exchange can occur and large issues can be tackled in small ways. There is still much work needed to done, and many of the projects are still in the initial cycle of their fruition, but the hope is to battle many of the issues facing the people of Guatemala alongside them.