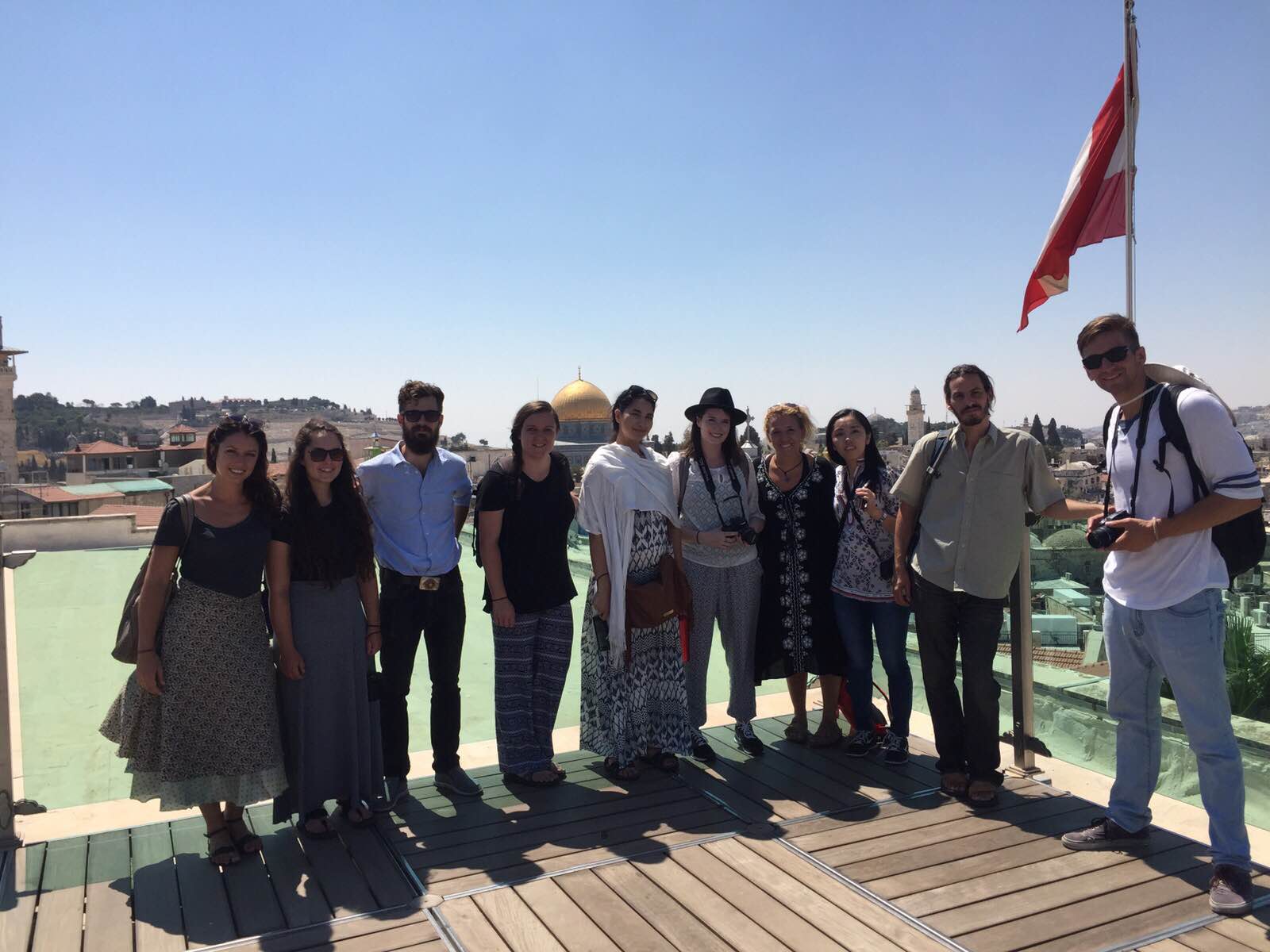 Posted at 19:49h in Middle East by Eric Schreiber

Written by Aidan Macnab, 2015 Middle East: Behind the Headlines

What do you call 3 Americans, 5 Canadians, and a Chinese woman living in a two-story apartment in Jerusalem with their two moms? Answer: Operation Groundswell’s Behind the Headlines, late summer program!

Our first shared learning experience was a tutorial on the conflict from Danny Siegelman, an American who has been living in Jerusalem for 40 years and is an expert in the city’s demographic makeup. Because skewed versions have been used for political purposes by both sides, his task is creating an accurate account of the city’s inhabitants. We Canadians enjoyed the fact that he shared our disdain for Stephen Harper’s Conservative government. Those who support Israel, truly, support an end to occupation as it is essential to the survival of the Jewish State, said Siegelman. 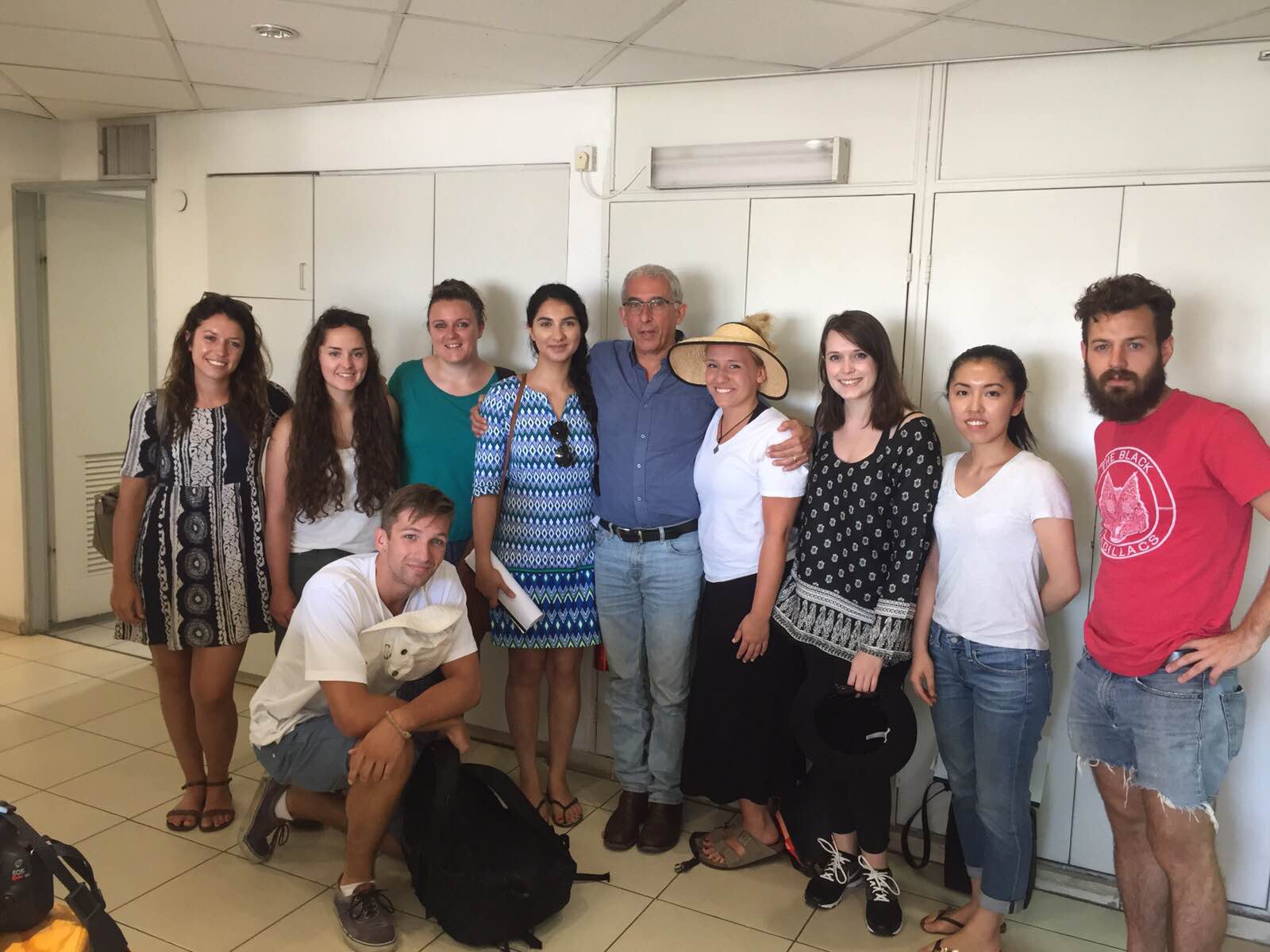 Then came the weekend’s desert extravaganza. The team, having been here a few days, was beginning to understand that Jerusalem never offers a single cloud to obstruct the sun’s intense heat. A few of us had mentioned that the temperature had not yet been as extreme as we had expected. On Friday, the heat was turned up a notch.

The sun beat down on us as we loaded up the bus. Here we met Abu Rami, who would be our captain, and Alon, our tour guide. The first stop on the journey was the treacherous, windy path up to the St. George Monastery.

As we dripped sweat and chugged water, as per our frequent and increasingly irritating reminders to hydrate (kidding moms), the group encountered a pair of pushy Bedouins slinging beaded necklaces, veils, and donkey rides.

“Do I have to pay for this?” asked a confused Melina, as a fine white fabric was aggressively wrapped around her head.

Team leader/mom and Arabic speaker Erin shooed the men away, which seemed to ruin the one holding the donkeys weekend as he followed us up the path and sat in while we had a history lesson from Alon overlooking the ancient monastery, muttering angrily and glaring at Erin.

Next was the Dead Sea.  We stripped down, had fun floating on the surface of the water, and lathered ourselves from head to toe in the world famous Dead Sea mud. As the sun set we ascended the hill, set up camp overlooking the water, and cooked our dinner in the Poeki Pot. Later, we had a visit from some handsome IDF soldiers looking for a Palestinian who apparently wasn’t allowed on that hill.

After a few scary stories from Mackenzie, and a short sleep with rocks and gravel lodged in our backs, we hit the road again, visited the Ein Bokek springs, and shared a watermelon with a few birds.

Next on the agenda was a visit with Lot’s wife at the Salt Caves. There we learned that Mackenzie enjoys reckless climbing and that a head lamp can function as a helmet when clumsy tall people stand up too quickly in a cave and bash their heads on the ceiling.

The day and the heat continued at the Ketura Kibbutz for lunch, where Klint realized his calling in life.

From there it was on to the Sinai. We said hello to a few Egyptian soldiers patrolling the border and had another rendezvous with the IDF.

For a more comfortable sleep then the previous night, we set up or sleeping bags at the Quray Sands and pondered our insignificance as we took in a brilliant starry sky and were confronted by the vastness of the universe.

“We’re all just Dust in the Wind” was Klint’s proclamation.

The next day we visited Sderot, a city on the Gazan border and heard testimony of the experience of living under the threat of Hamas rockets and saw first-hand the effect that fear can have on a person’s ability to empathize with people living only a few kilometres away.

After the desert excursion it was time for work. We spent the week volunteering at a Hand in Hand school’s summer camp: Project Harmony. The program brings together Muslim and Jewish children and offers a bilingual education in an effort to foster community among two very divided communities.

We’re looking forward to learning from our partners there and really delving deep into these highly divisive local issues. Until then…