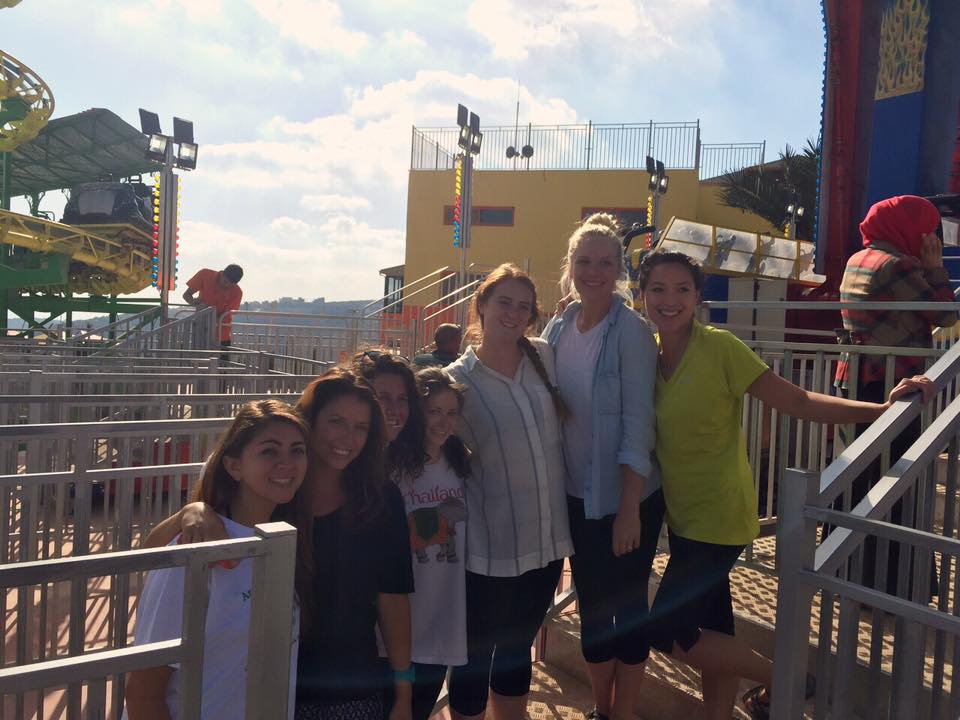 11 Jul Our Last Day with the Kids

Posted at 17:20h in Middle East by Eric Schreiber

On Sunday we had one of the most bizarre experiences of our trip so far. It was our final day with the kids and we hopped on three buses, two of them packed with screaming Bedouin children, and drove off to a “water park” in the middle of God-knows-where, West Bank. The tiny village we were driving through opened up to a mountain with springs inside where the water park was hidden. Tables and chairs were placed literally on the stream so that covered up women could sit and dip their feet by lifting their skirts ever so slightly. Around the stream, decks were built with small pools that families could sit around and dip into, for an even more private atmosphere. The entire thing was tented and hidden from the sun and from outside eyes.

Running along the mountain were staircases that led to the kids pools, which we were inevitably dragged to and cheered on to jump in. The boys had one bigger pool for themselves and then there was a smaller pool that all the kids could jump into. Apparently there was also a mysterious women’s pool that you had to pay for which none of us seemed capable of finding, partially because we were so wrapped up chasing after our kids.

Needless to say… It was madness. The kids splashed and jumped and yelled and laughed and threw water at each other and at us and ran out and slipped and wow… Pure chaos. But the kids? They LOVED it. The water was freezing (I know because I was soaked from mere splashing alone – I didn’t dare go in), but I have never seen a happier child than shivering Zenab with her teeth chattering as she begged me to jump in! We all had quick lunches of pita bread (duh) and hummus (DUH) before heading off to an even crazier place.

Prepare yourself: This is the epitome of strange contradictions. Communication isn’t really an easy thing amongst us and the Bedouin teachers we’d been working with, so we kind of seemed to be dragged along to these plans. We hopped on our bus, Abu Rami driving fearlessly to God-knows-where-number-two, and were falling asleep when we saw the first ferris wheel. Yes, a ferris wheel. Quickly followed by an eclectic collection of plastic dinosaurs, seemingly harmless roller coasters (more on that later. Still covered in bruises thank you very much), and even an indoor 3D ride. And then to add on to the already odd situation, it was all piled atop a massive mountain overlooking an impoverished village.

The kids were ecstatic. They poured in and ran from ride to ride, fascinated. Numerous times we were dragged by one child to the next from ride to ride, and even more so by the Bedouin women in their hijabs who constantly asked for pictures with us. The tacky but hilarious 3D ride bathed us in foam, and the newest roller coaster smashed us into the cart when it stopped, sprinkling our knees with freshly blooming purple and blue bruises. We found out sooner rather than later that most of these rides had never been used by visitors and that the theme park, attempting western standards and grandiosity, had recently opened. The cafeteria inside was decorated with Disney font lettering pointing to different foods (burgers, hot dogs, drinks, snacks), and tiny shops of souvenirs were built next to it. There was also a snake visitors could put on their shoulders, and one of my favorites was the brilliant blue macaw bird that happily let us pet her for nearly half an hour.

And though all these things were great, and weird, and confusing, and exhausting, I think I speak for all of us when I say our favorite thing of the day were the bumper cars. As foreigners we were treated annoyingly better than the other guests and were given free rides on a lot of different occasions. The one place we didn’t complain about it was on the Bumper Cars, which we rode multiple times and viciously crashed into each other from one side of the track to the next. The cherry on top was when Abu Rami joined us and hopped into his own Bumper Car. The lovable old man drove a hard battle and left many an OGer with their fair share of bruises. Jeremy was a surprisingly angry driver and Erin swiveled into us multiple times. It was fun at its purest and most basic of forms. We laughed like five year olds and ended our day with an insane last car battle before finally heading home, just as worn out as the kids.