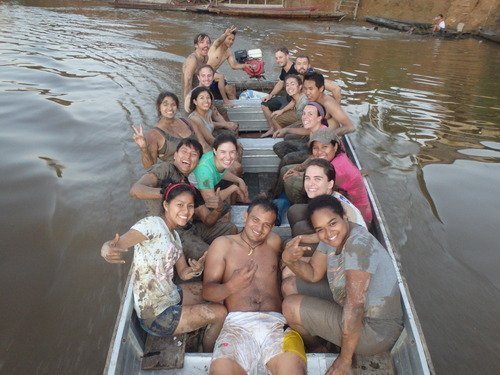 05 Aug Pampachica and El Chino: Life in the Amazon Jungle

Posted at 12:05h in South America by Operation Groundswell

Twenty days in and the group is currently working on a library at an elementary school in a district of Iquitos called Pampachica. We arrived in Iquitos after a thirty hour bus ride to Tarapotas, then a three hour bus ride to Yurimaguas, followed by a one and a half day boat ride to a village that was a three hour drive from Iquitos.

Initially, the one and a half day boat ride was supposed to be a three day ferry ride, but after a long wait on the ferry, a group of four thousand chickens managed to wrestle our spot on the ferry from us. To add to the chickens’ victory, they were also provided with a TV for entertainment during their ferry ride. For those of you readers who are very confused at this point, that is totally understandable – that is exactly how we felt. So the alternative plan was the one and a half day motorboat ride, sacrificing the comforts that the ferry would provide us. On the bright side, this meant we also got one extra day in Iquitos which we used to go to an animal reserve. All this travel may sound exhausting, but it was loads of fun since the scenery was beautiful, and our group had a fun time goofing around when we got bored. 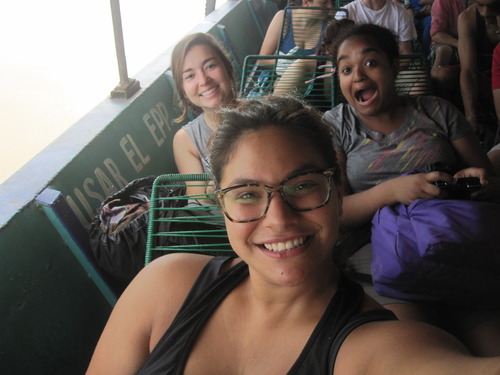 Still in good spirits despite our change of plans! Photo by Julia Girmenia.

Our first day of construction was the day after we arrived. We had to get to the elementary school bright and early by 6am, and we began work with many of the residents of Pampachica to kick things off. Our job that day was shoveling a giant mountain of mud (perhaps more feces than mud, frankly) that served as the foundation for the library to come. It wasn’t glamorous work by any means, but it was necessary. And we all accepted that, and put our backs into it. The charming little students of the school added to our motivation as their faces acted as a reminder as to why we were shoveling this mountain of dirt.

We earned ourselves a short break one day  and took a  visit to the animal conservation. I hadn’t seen most of the animals that this place housed. It was surreal being so close to a jaguar. 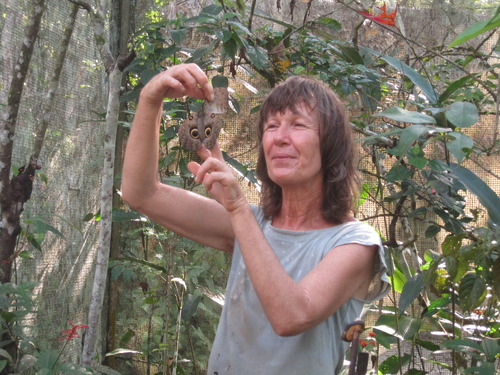 Our visit to the butterfly farm and animal orphanage. Photo by Julia Girmenia.

We resumed work the next day and the rest of the week was spent shovelling a trench that initially seemed to be a nearly impossible task. During our meetings, a few of us expressed that we were not happy about this monotonous and exhausting work of shovelling a trench. In all honesty, I’m sure a lot of us were feeling this way. However, as we talked it over, it became clear that this is what needed to be done. And although it was gruelling labor in heat that most of us haven’t experienced – at least not for an 8-hour workday – we tried to come up with ways to pass the time quicker and make it more fun. For example, we played 21 questions. Every round, someone would blurt out “double-death-jungle-hornet” very early on in the guessing, which perpetuated a running joke of our group regarding a fictitious gargantuan, beastly, and evil insect which you would certainly not want to encounter in a back-alley. This beast is one of many myths that us “gringos” fear to be a reality in the Amazon jungle. By the end of the week, we were nearly finished the trench and took a much needed break from our exhausting construction work. And so we went for a journey to the heart of the jungle… 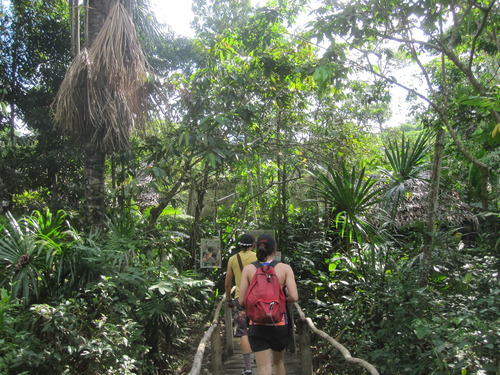 Into the jungle. Photo by Julia Girmenia.

We spent three-nights in a small jungle village called El Chino. We stayed with a family that is friends with our organization, and they treated us like their own. Our gracious hosts treated us to three delicious meals every day, two breathtaking jungle expeditions, and one wildly entertaining soccer match!

We arrived on Saturday afternoon drenched to the bone. We took two boats to get there. The first boat ride was about an hour long, and the second was about three hours long. The second boat ride is where the torrential downpour began. Our boat was uncovered, so we were provided with tarps by the crew to cover ourselves. Although we had the tarp over us, we still managed to get completely soaked. That was some serious ‘rainforest rain’! Nevertheless, we were in good spirits upon our arrival! 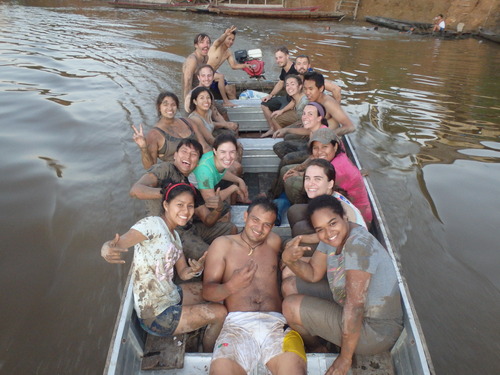 For the jungle expeditions, we were divided into two groups: Team Winning (with Mikel) and team Lynning (with Lynn). On Team Winning’s first of the two jungle expeditions, we went for a trek into the jungle where we went fishing. Our jungle guides were Carlos and Fausto. Carlos is one of the sons of the family we stayed with. Fausto is a distant uncle of his. They were so incredibly skilled at navigating the jungle, and led us through an unforgettable trek. We trudged through deep, muddy terrain for about an hour until we came to our spot at a lake where we began fishing. Carlos demonstrated to us how to fish, and I’m not exaggerating when I say that he literally caught a fish at the instant his fishing hook touched the water. It took most of us at least 5 minutes to catch anything.

Mikel, our group leader, almost managed to reel in an electric eel. As he was reeling it in, Carlos urged him to release it and not bring it in. Mikel had no idea what the enormous beast was that he was reeling in, but Carlos clarified later that it was an electric eel. Getting shocked by this is potentially lethal, so it is a good thing Carlos was there to prevent that from happening. Also, if Mikel managed to reel it in, I’m sure his ego would’ve inflated to an irritatingly high level, so we all had a sigh of relief on that one!

All jokes aside, our first Amazon jungle trek was something beyond expectation, and we all got back to the village in high spirits. And even more fun awaited us: soccer in the mud!! Team Winning played against Team Lynning, with some honored guests such as Carlos, Fausto, and Sandro (Carlos’ brother). 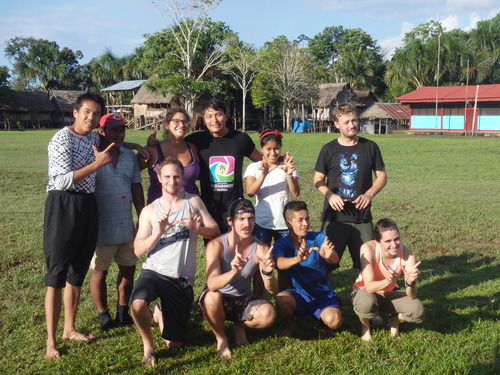 The pitch we played on wasn’t exactly a conventional soccer pitch. It was incredibly muddy and slippery (in some parts more than others). Everyone – and I mean everyone – took a tumble into the mud. It was the most fun game of soccer I’ve ever played (and I play fairly often). And to see the look of joy on the faces of the people of the village as they watched and played the game was even more unforgettable. There was joy all around. And the teams were so even, that we ended up needing to resolve our match in a penalty shoot-out. A dramatic finish involving Fausto scoring, followed by Michele (who is also part of the family we were staying with) scoring immediately after made us call a draw.

We all ran to the river and jumped in for a much needed washing. The river was incredibly refreshing and we all took a turn going down a water slide made entirely of slippery mud. It was all so much fun, there were smiles everywhere. In the night, we went for a boat ride under a clear dark sky bright with stars, to a village about ten minutes from El Chino where we celebrated Peruvian Independence Day. 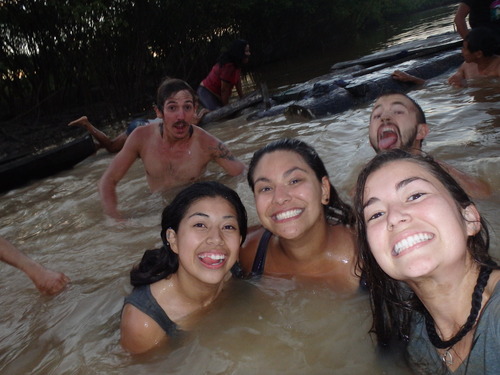 We call this the ‘Jungle River Selfie’. Photo by Julia Girmenia.

On our second jungle trek, we journeyed the lowlands of the forest to observe wildlife. We were led by Jorge, who is the father of the family we stayed with. He is a gentle and humble man who has a vast knowledge of the forest. Unfortunately, we didn’t manage to spot any animals, but we learned about some neat plants. For example, we learned about a tree called the “intestine of the tortoise”, which lives forever, and according to folklore, if consumed it contributes to longevity. We also learned about a species of ant that apparently has a vicious bite, not only because of the immediate pain it causes, but also because the venom in their bite can cause a fever, and if bitten more than ten times it can even be lethal. Needless to say, the group kept their distance from a tree teeming with them.

Later on in the day we visited a garden that belonged to the village of El Chino, and Romelia – Jorge’s wife – gave us a tour of the plants and their uses. There was such a wide variety of uses ranging from pain and inflammation remedies to hallucinogens that Shamans use for their training. It was another interesting dose of a culture I knew very little about.

Today, our first day back at work after the visit to El Chino, we finally finished the trench we were digging, which had flooded due to it raining while we were away. We still have a week’s worth of work before the group heads back to Lima and splits up for Independent Travel Time. In the days before our flight back to Lima – where our journey began – we have a lot of work to do at the construction site. I unfortunately won’t be able to partake in anymore construction work due to a finger injury that occurred during our soccer game. And although it is disappointing, I have been put to use in other ways, such as writing this blog.

Hope you enjoyed it!