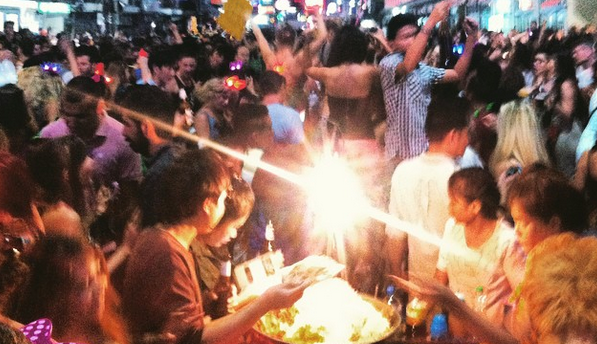 Posted at 02:43h in Southeast Asia by Justine Yu

Bangkok is a modern, international city that attracts millions of visitors each year. People are drawn to its unique blend of cosmopolitanism and a proudly displayed and celebrated Thai cultural heritage. It’s a chaotic city with never-ending traffic congestion, smog, and shopping malls and high rises coexisting with dirty canals and cluttered slums. It’s a charming and colorful city with hundreds of beautifully adorned Buddhist temples, a gentle pace of life and delicious and plentiful food along every street and around every corner. Bangkok is a multilayered city of extremes. Some love it, some hate it. But that’s not the point. 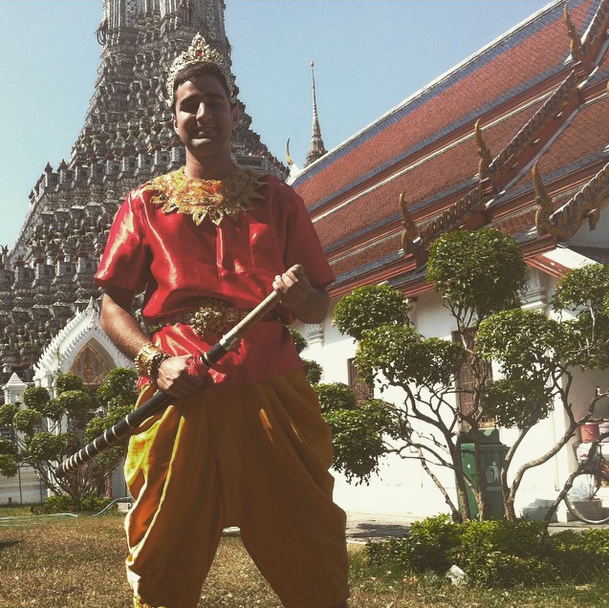 As a traveler you can’t brush it off as superficially touristic but you also can’t pity it as a dirty and chaotic urban mess. You have to try and see it for what it is. During our time here, the SEA Cities & Sanctuaries group embraced being tourists by taking silly pictures dressed in knock-off traditional costumes in front of a famous temple. But we also dug far beneath the surface by visiting the Klong Toey slum where we learned about the harsher realities of life in Bangkok and the deep inequalities plaguing Thai society.

Our adventure began with a visit to the famous Chatuchak Weekend Market, renowned for its endless array of stalls selling all sorts of trinkets, goods, clothing, handicrafts, music, and food. We took tuk tuks back to the guesthouse and feasted, family-style, on Thai food that evening – dtom yam gung, pad thai, curries, morning glory, papaya salad, fried cashews that puts to shame anything you’ve ever had from Thai Express (and for a fraction of the price!)

The following day, the group embarked on the annual OG Scavenger Hunt! Divided into three groups, everyone was sent out to discover new sights, overcome challenges, and learn historical facts without the use of the internet. Overcoming language barriers, getting lost, avoiding scams, getting stuck in traffic, marveling at temples and statues, trying different fruit, being overwhelmed by new smells, cruising on the river, taking the sky train, cooling off in super air-conditioned malls, and much more were part of the adventure. Oh, and some pretty hilarious raps summarizing each individual experience were performed that evening as we lounged overlooking the hectic backpacker district of Khao San Road! 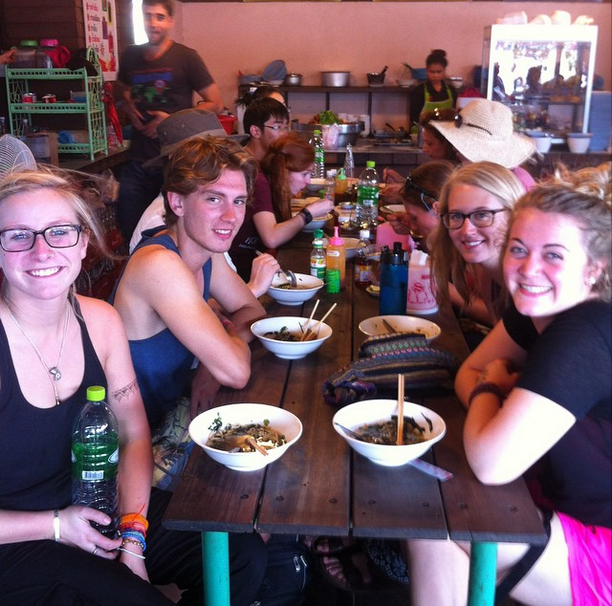 Our third day was spent exploring yet more of the Big Mango. First, we visited Wat Arun, one of the oldest temples in the city. Originally a Hindu temple (built in Khmer style), this revered building requires a very steep ascent to the top (and back down again!). Before leaving, the whole group dressed up in Thai costumes and posed in elegant royal fashion in front of the temple. After a quick lunch of noodle soup at a small street stall, we climbed to the top of yet another very unique temple – Wat Saket (known as “The Golden Mount”). The temple is located on top of an artificial sacred mountain, and the gentle ascent is made comfortable by small streams, greenery, and mist. The view surrounding the stupa at the top affords a spectacular panoramic view of Bangkok! Not quite ready for our afternoon nap, we capped off our tour by visiting the Jim Thompson House Museum. There we learned about different forms of Thai architecture, the silk industry, and the mysterious disappearance of Jim Thompson who was an avid admirer of Thai art and culture. 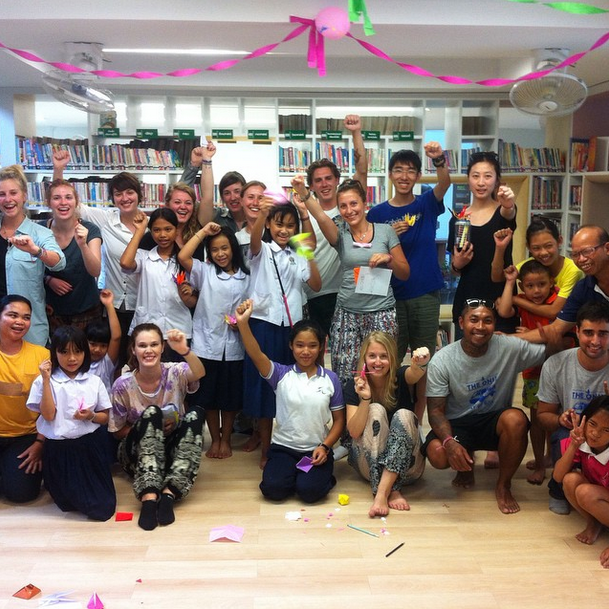 We all agree that our last day in the city was the most memorable because we had the chance to experience a side of Bangkok that few, besides those residing there and a handful of NGO workers, ever get to see: the slum of Klong Toey. We received a warm welcome from the Sikkha Asia Foundation – a Thai NGO that provides education projects for underprivileged youth in Thailand (particularly in urban slums and in remote areas in the north) by incorporating community libraries, mobile libraries, student dormitories, and study grants.

We visited their community library (which also acts as their head office) in Klong Toey, where General Director Khun Arunee took the time to show us around the neighborhood where she was raised and where she has spent the last thirty years making a positive difference. While the poverty of the place was, at times, painfully apparent, we were inspired by the sense of community that pervaded the area. After our leisurely walk, we spent some time with the children who had come to the library for the afternoon (as they do on most days). They taught us how to make origami and showed us how to write our names in Thai, Khmer, and Burmese. Most of the kids there are part of migrant communities, mostly from Cambodia or Myanmar, and face not only economic marginalization but also cultural stigmatization from mainstream Thai society. 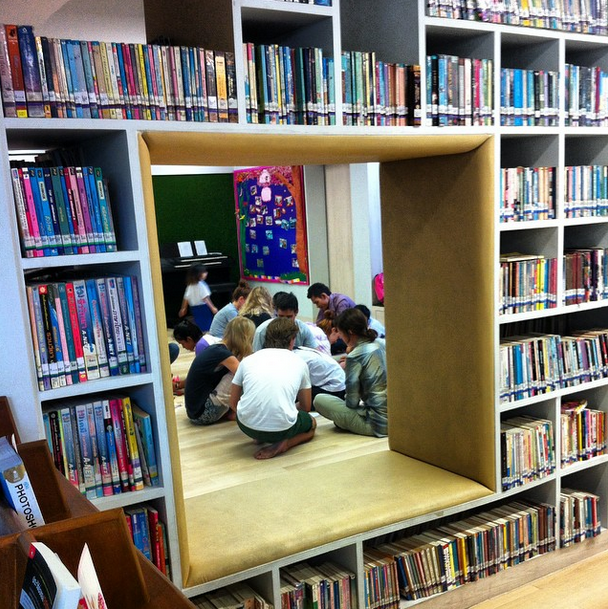 Our visit was concluded by a shopping spree in Sikkha’s handicraft shop – a social business which employs local women residing in the slum to produce traditional handicrafts (scarves, bags, bracelets, quilts, etc.). We left with conflicting emotions – simultaneously saddened by the generational inequality that perpetuates the existence of this massive slum, but also inspired by a carefully planned and conscientious effort by Sikkha to improve conditions and empower a new generation to move beyond their limiting circumstances.

After another night of feasting on Thai food, we embarked toward Cambodia the next morning. Whether we love or hate Bangkok, in only four short days we got to weave through some of its many layers and got a sense of what it is like to live in a city of such extremes.

Until next time!
The SEA Cities & Sanctuaries Crew