31 Jul Seeing Both Sides of a Coin: Traveling to a Settlement and a Refugee Camp

Posted at 05:54h in Middle East by Operation Groundswell

Ma’ale Adumim is an Israeli settlement where we spent most of the day on Friday.  It is a settlement that is at least a 30 minute bus ride from Jerusalem, but is still considered a part of Jerusalem.  We went to the mall and had a scavenger hunt which involved taking photos as well as talking to locals who live in the settlement about their views on a two state solution and their reasons for choosing to live where they do.

On Shabbat, or Saturday, we took a day trip to Bethlehem. We split up into different groups to explore the city on our own schedule.  Traveling to a city that has such deep religious meaning and where some people even take pilgrimages to, was a unique and humbling experience.  After heading back to Jerusalem, a group of us stayed in the Old City to see the Western Wall fill up for the start of Tish’a B’Av, a holiday commemorating the destruction of the two Temples.

Today (Sunday) was our last day at Madrassa Al-Nour school. It was very bittersweet. We had a ceremony in the gym where all the teachers and many of the teacher’s aids, students, and we as a group sat in a circle. During this ceremony, we each got to pass the ball to one of the children and tell them something.  It was a really special and touching experience for all of us.  After saying goodbye around noon, we had a lunch near the Garden Tomb and had an hour before traveling to Kalandia. 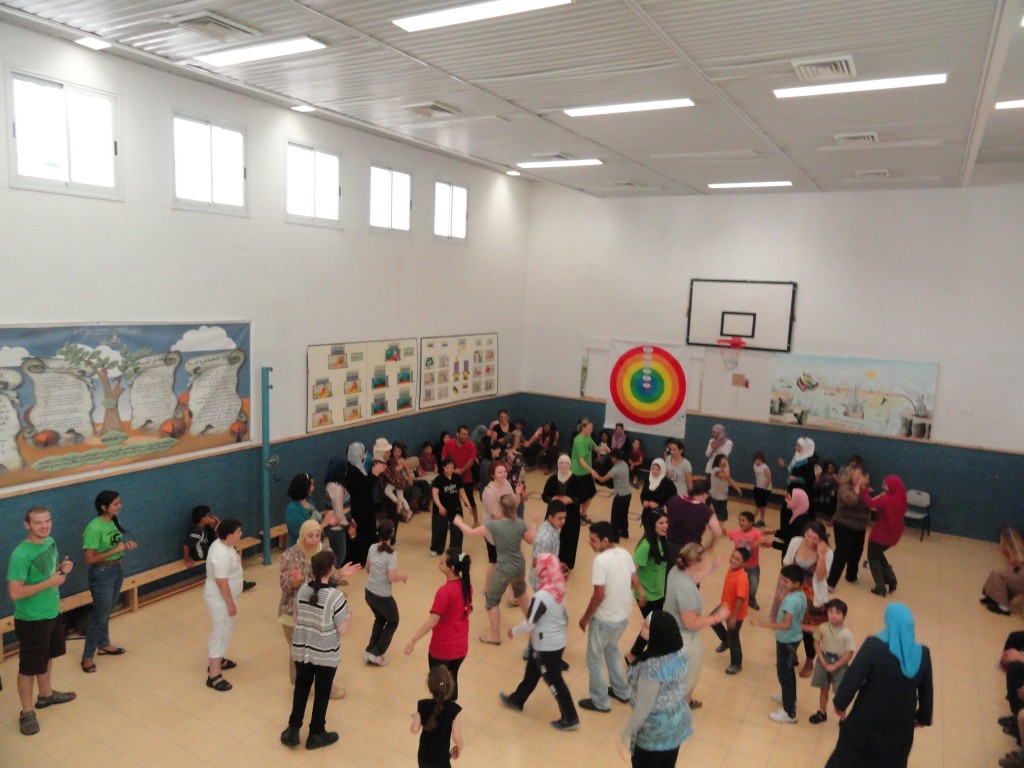 Playing at the Madrassa Al-Nour

Kalandia is a refugee camp which is comprised of people from 52 villages from around the area.  It is located in the West Bank and now has a population of 21,000 in only 1 square kilometer.  We got a tour from a resident, named Hamsa, who has lived in this camp for twenty five years.  He explained to us how he has to wait for the wall to come down to have any sort of freedom or security.  Near the end of our tour, we were able to go near the separation wall, which had lots of interesting graffiti. The visit was a very powerful and disheartening one for us, but it reinforced again the importance of our trip and learning about real people’s lives here in Israel and Palestine.