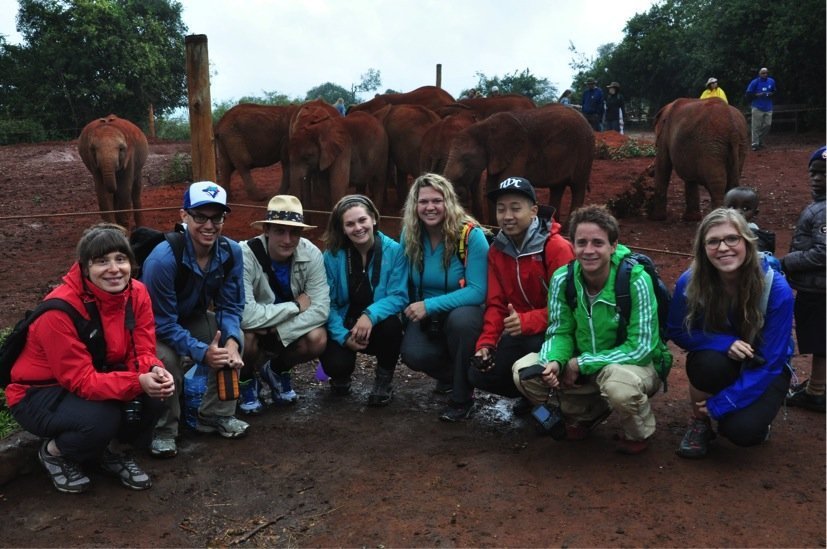 26 Jul The Start of Something New: Nairobi, Kenya

Posted at 22:36h in East Africa by Operation Groundswell

Our 6 week long adventure began in the bustling city of Nairobi. Once the late arrivals were settled, we shared greetings and introductions over cold Tusker Beers. There was Megan, the earliest to arrive; Ben, fast asleep; Vanessa, the poet; Carl, with his new found love of all things GOAT; Hanna, the nurse; Mike, Karate Kid; and Michaela, late as usual and already running on African time. Of course, there was also Adam and Linda there to greet us, Adam at the airport and Linda waiting back at the hostel with a hot bowl of soup, a blazing fire, and a warm smile. The tardiness of the airport, taxis breaking down before leaving the car park, the zebra on the side of the road, and wifi in the hostel were all surprises for the new arrivals.

Forgetting all about the jet lag, we set off the next morning to the David Sheldrick Wildlife Trust, which sits right beside Nairobi National Park and is home to over 30 orphaned elephants. Caretakers gave us a talk about the elephants, and how they were prized from their families by poaching and human-wildlife conflict. The elephants are looked after by full-time carers, some of whom even have to sleep with the youngest of them. They remain in care until they are old enough and able to be accepted by a herd in the wild. We also saw our first troop of wild baboons!

Photos by students at the Mwelu Foundation.

After a very African lunch at a police canteen, we headed to meet our first partners, the Mwelu Foundation in the Mathare slum district of Nairobi. Our first impressions of the slum were striking. What a huge difference from the built up areas of the city and up-market country homes surrounding the national park! Kids are shouting ‘Mzungu how are you!’ from alleyways, and our senses were truly bombarded with the sights, sounds and smells of slum life. It gave us a lot to ponder. 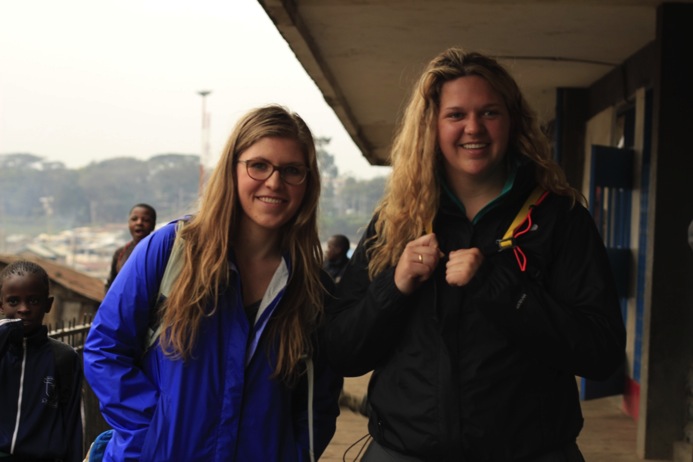 Hanna and Megan at the Mwelu Foundation HQ in Mathare. 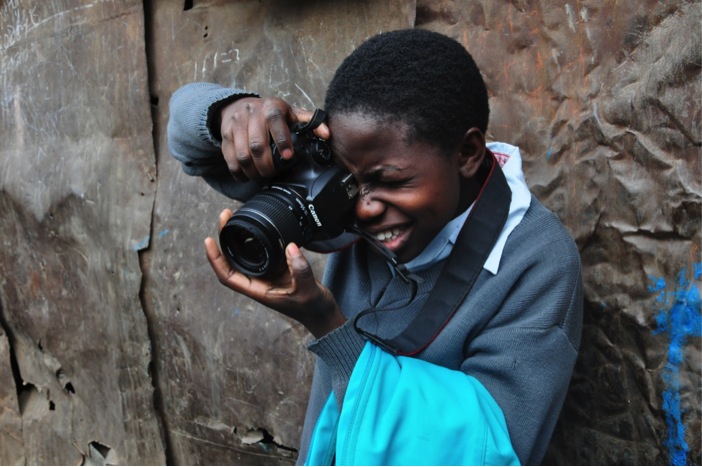 Photos by students at the Mwelu Foundation.

The guys at Mwelu Foundation, who run photography and film-making workshops for kids of the slum, showed us some of their work and we took part in a photography class with around 40 local kids. Their enthusiasm was infectious and very soon our cameras were notching up thousands of photos, the best ones coming from the kids themselves. It was amazing to see their passion for this creative medium, and the work of the Mwelu foundation to foster that sense of pride and achievement in kids who rarely get the opportunities to express their creativity, let alone their life stories. 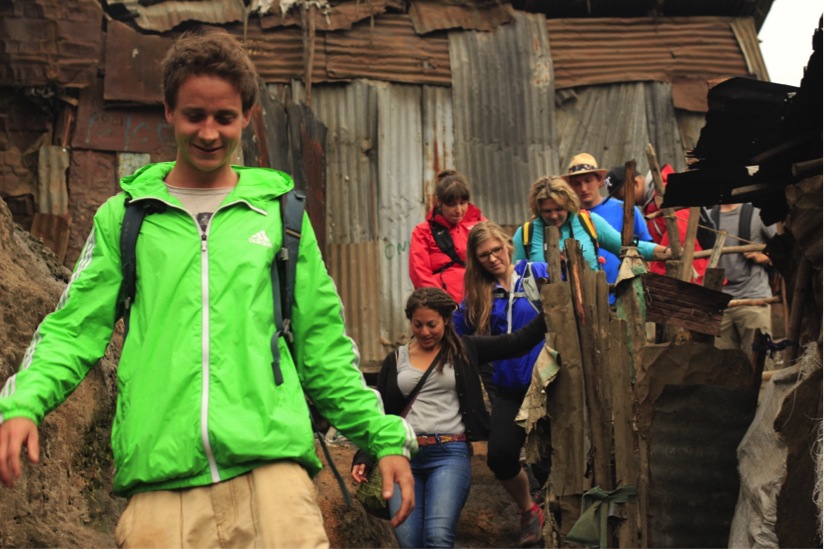 We were all impressed by the devotion of the volunteers to the work they were doing. Our host, Alex, told us something that has stuck with me: “I’m going to do this for the rest of my life because I feel very happy to see kids learning new skills that can help them in their lives”. 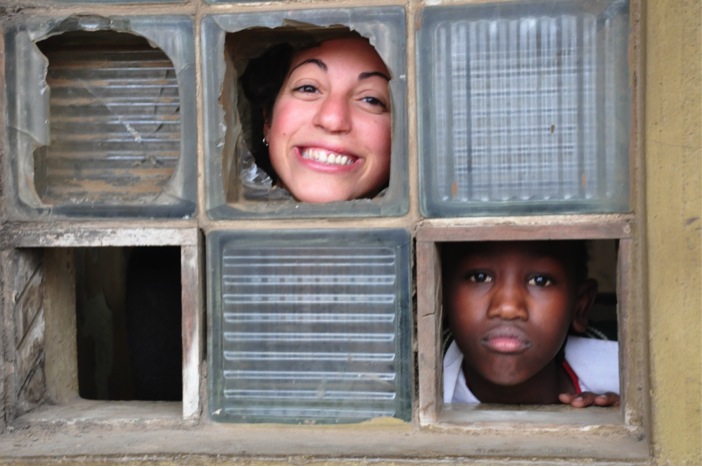 Photo by students at the Mwelu Foundation.

That evening we were lucky enough to be visited over dinner by the founder of Mathare Radio, an incredible lady and close connection of Vanessa’s, called Wairimu. She told us about the current media landscape in Kenya, and how the lack of unbiased information has resulted in conflict between tribes and political groups. She is involved in various sensitization initiatives for vulnerable groups in society and we were impressed with her motivation and bravery. 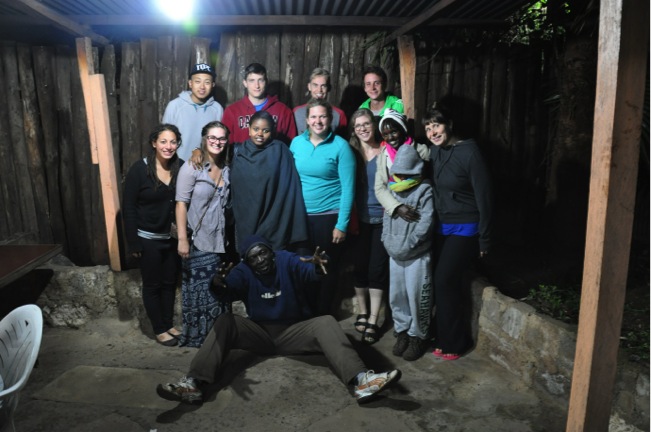 Wairimu and Eunice from Mathare Radio with the OG East Africa Discovery Team.

We had quite the day meeting such an inspiring group of people. And what better way to end an already spectacular day with our first taste of Nyama Choma, barbequed goat meat? For some it was love at first sight (or should I say bite?!).