Posted at 22:46h in East Africa by Operation Groundswell

Today’s post is by Steph, from the Gender and Human Rights trip in East Africa. She also blogs on her own here.

Nairobi was clearly a blast, and although with much desire to stay in the city, we had to head off to Lake Navaisha. There, we camped for 2 nights and biked around Hell’s Gate National Park. 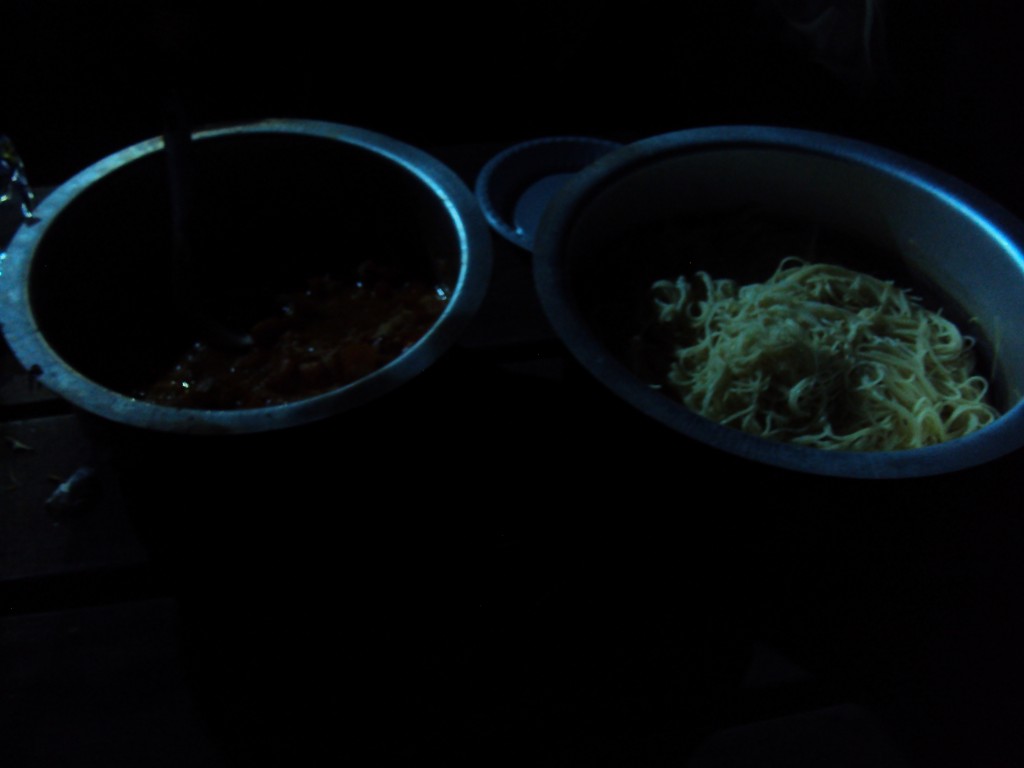 The campfire food was pretty good, but that could have just been due to our empty stomachs. 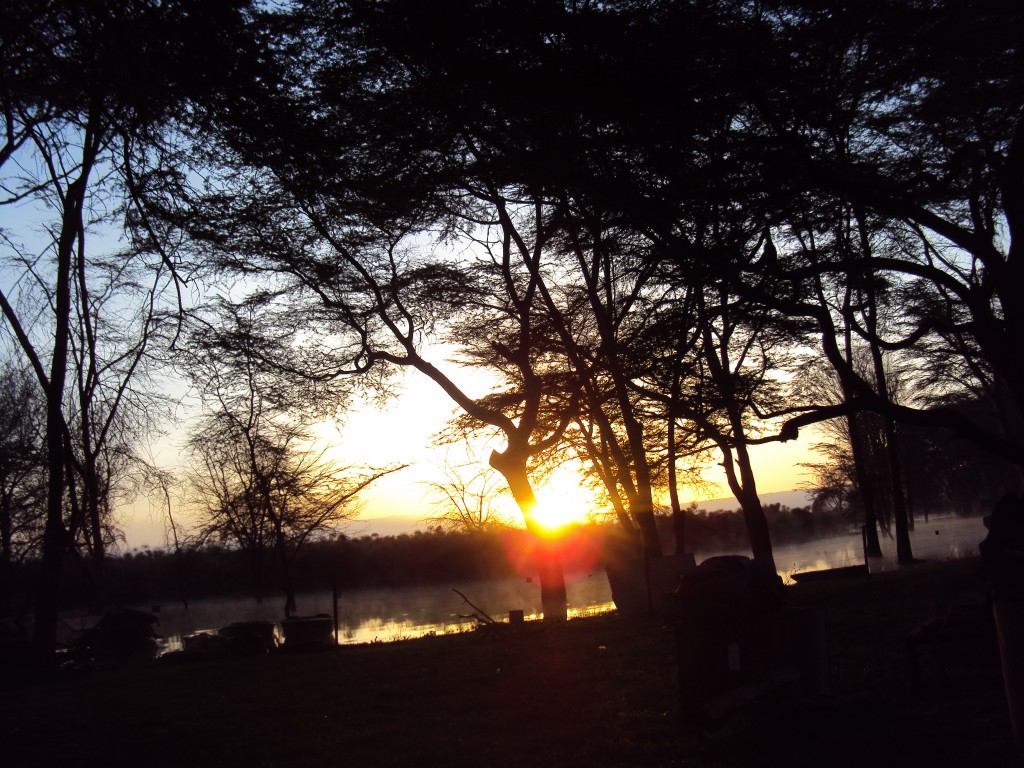 The sunrise over the lake almost made me forget about the bad night’s sleep in the cramped tent. 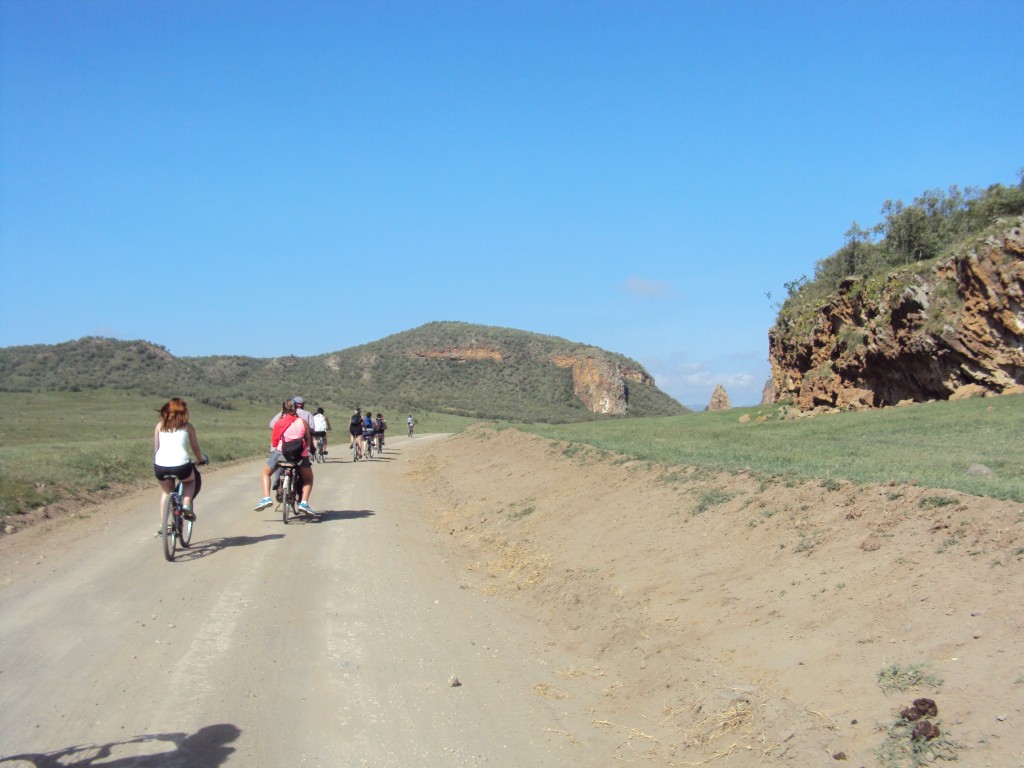 Biking around Hell’s Gate was unreal. Biking along zebras, giraffes, warthogs, and the rest of the cast of the Lion King was cool beans to the max*. 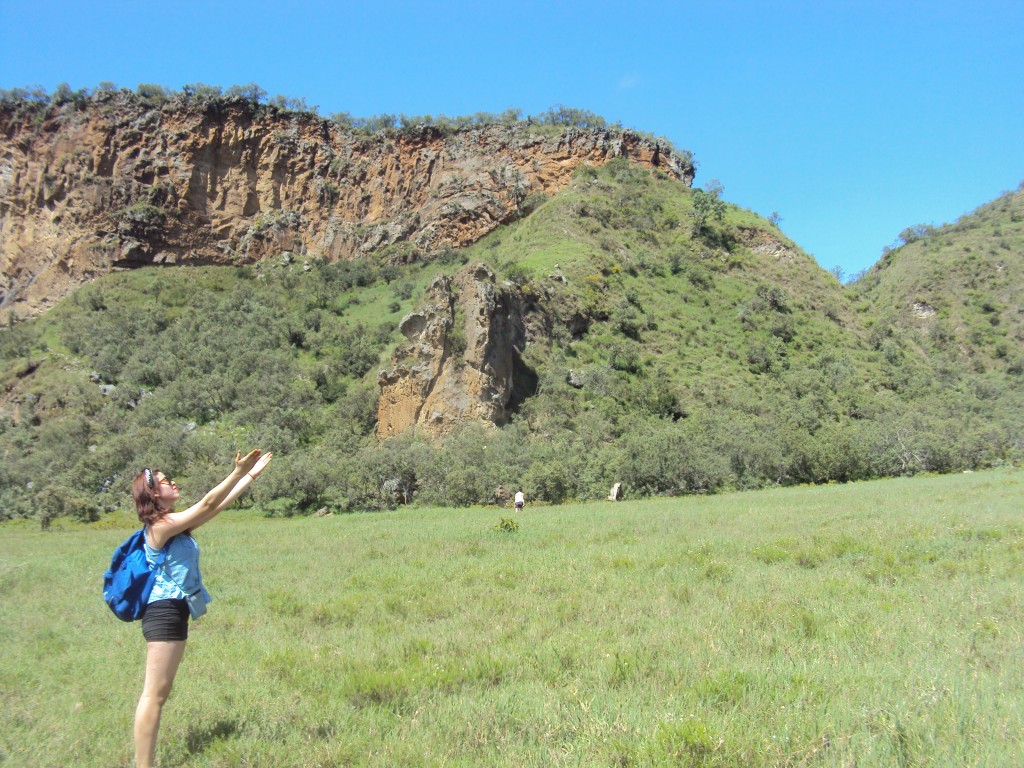 May day, may day; there’s a cheesy tourist here.

Doing cheesy reenactments in front of Pride Rock was also cool. This was the rock depicted in the Lion King where the baby lion was held up (lol I never watched the Lion King before, don’t be mad plz). 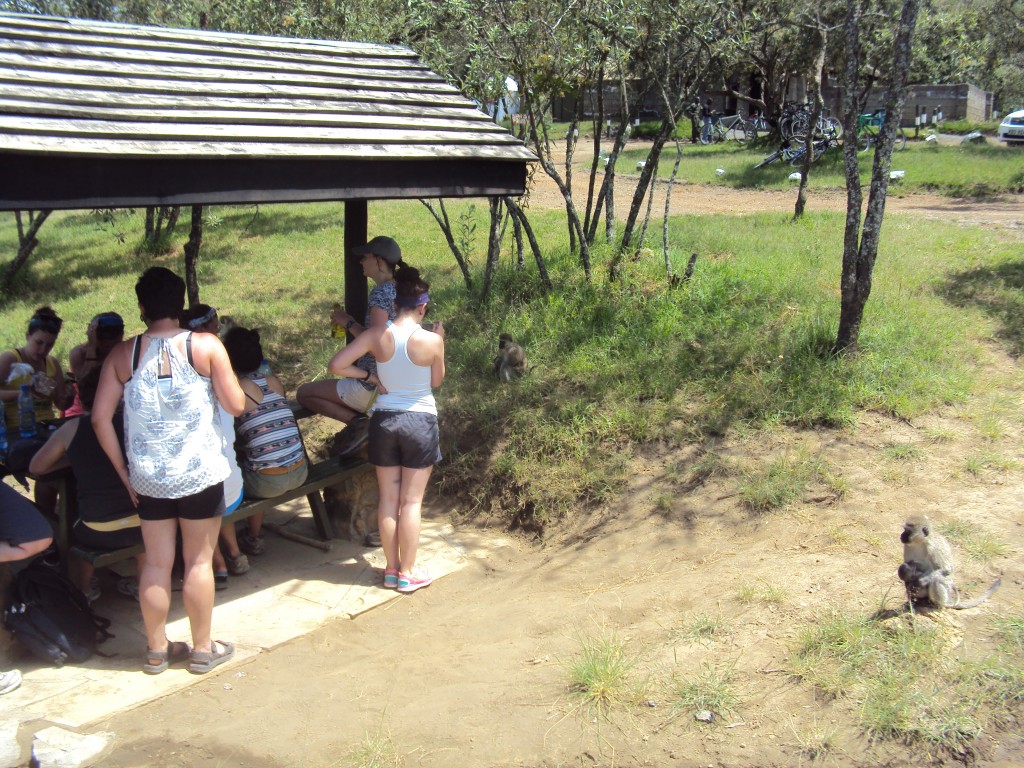 Baboon checkin’ us out.

Lunch was cool but the evil food-stealing, cut-eye giving, weird-blue-balls attaining baboons were so not cool. 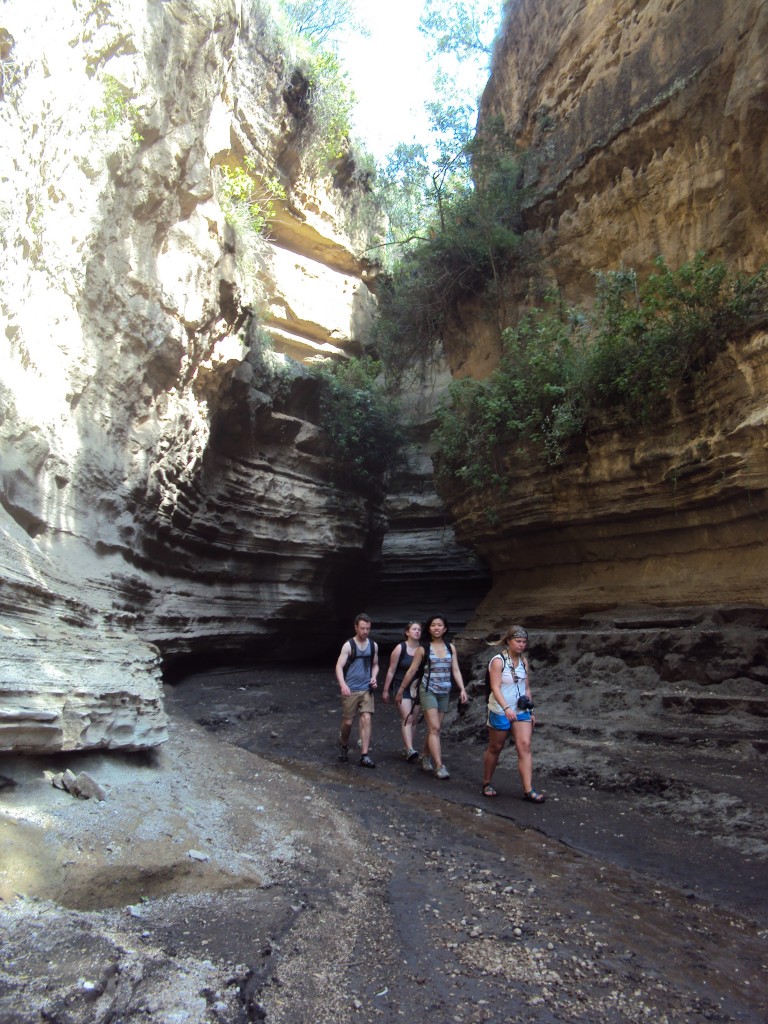 It was a pretty tough trek for me, but getting the top made it worth it.

Then we climbed the Gorge. It was incredibly beautiful, and my fellow OG mates upped the beauty factor somehow. 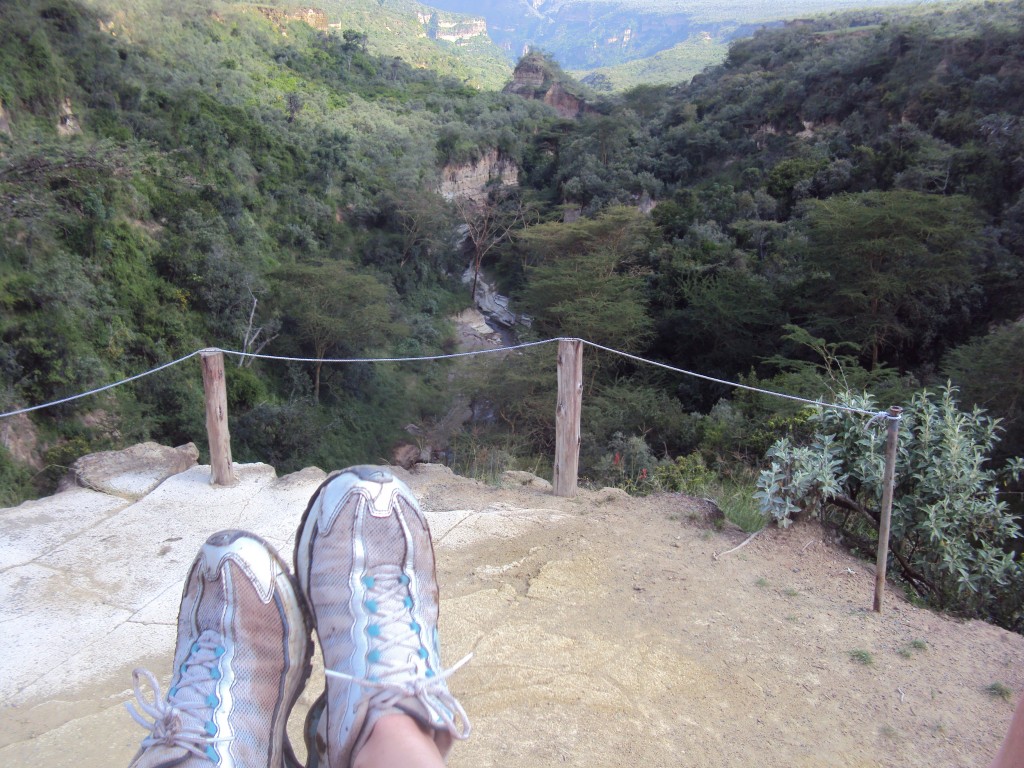 Fresh view with some stanky shoes.

It was a pretty tough trek for me, but getting the top made it worth it.

After a really freaking cold shower, dinner, and good night’s rest, we hopped into a matatu and headed off to our next stop: Kisumu, Kenya’s 2nd largest city.

Our trip leader Josh made a pretty impulsive purchase of 10 roasted corns when one of the corn vendors approached the matatu on the way there. 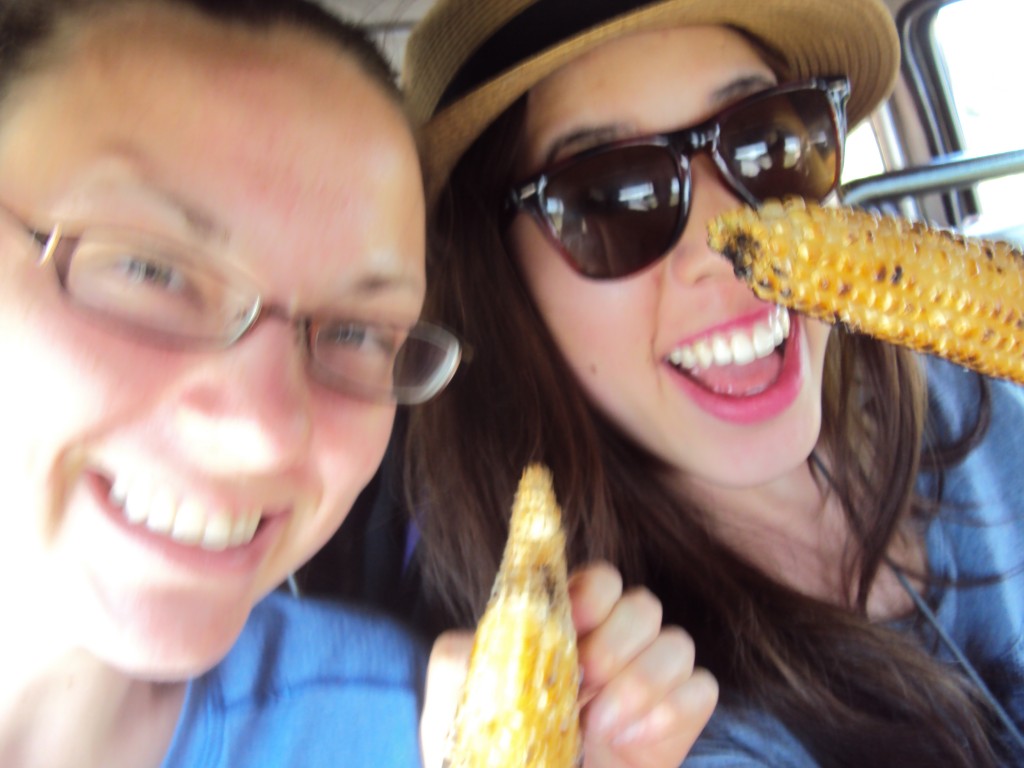 Morgan and I showing off our corn just because.

And after 6 hours of bum vibrations from rocky dirt roads and drips of sweet sweat, we made it to our little apartment! 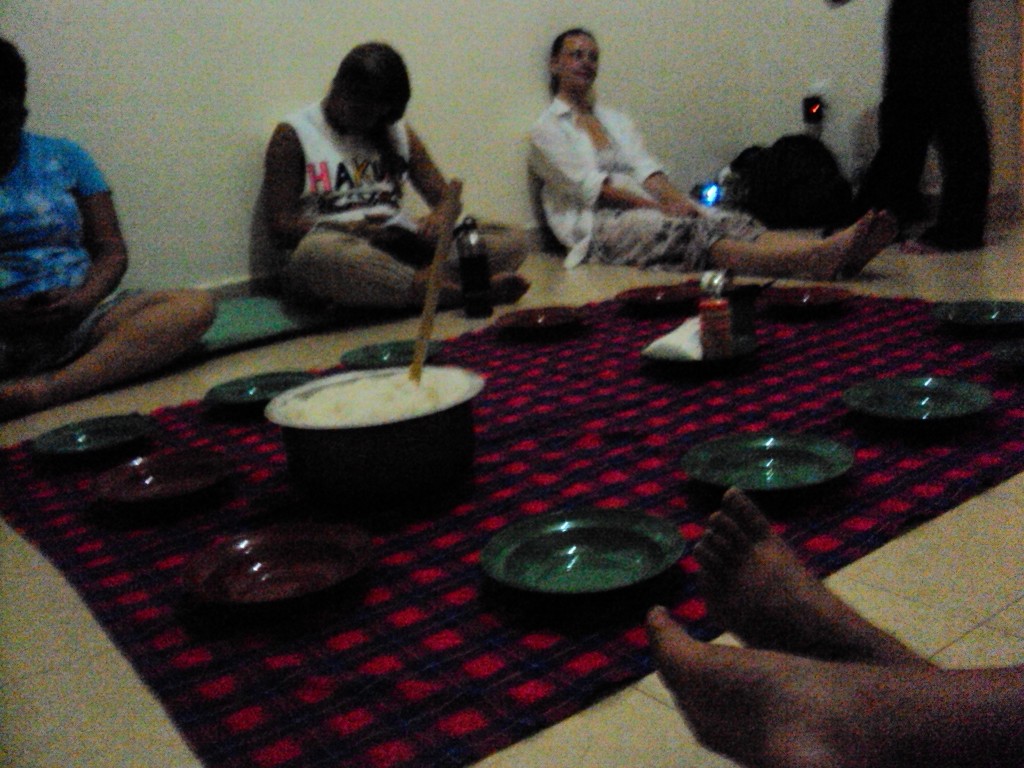 We’re happier than we look, I swear.

Being here in Kisumu was mostly due to our partnership with an incredible local community organization called the Young County Changemakers, or YCCM. They’re a group of friends who were born, grew up, and still live in one of Kisumu’s largest ‘slum’ communities, Nyalenda. The group works together to combat issues that they find are significantly impacting their community, such as the lack of light and space for children to study in, and the lack of accounting for the well-being of children.

We visited the library that they recently built within Nyalenda. OG and YCCM are currently working together to complete the library with more books and complete construction. 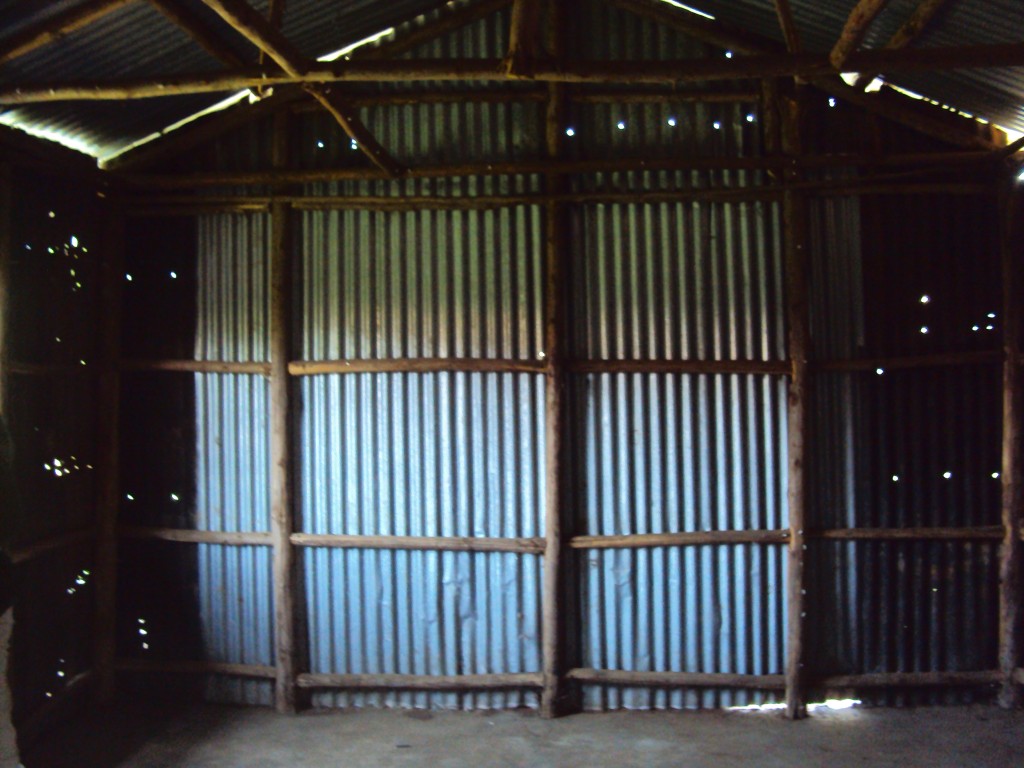 Inside the uncompleted library.

This library was built because of YCCM’s recognition of the hardships that the children in the community face when in school. Many children in Nyalenda are unable to do their homework after school due to the lack of kerosene light in their household. As their mothers need the fuel for cooking, and their fathers typically need it for other work, the children are then left with no light to use to complete their homework. Then, when in school, the kids receive flack from their teachers for not completing their homework. They fall further behind in class.

This narrative that was shared by YCCM is one that is common within their community. That’s why the presence of this library in Nyalenda is so important in attempting to support the children in their studies.

What’s more, YCCM and OG have been constructing a toilet near the library. This toilet will be running with a required fee for users, which will be used to maintain the toilet and provide employment for the maintenance worker; an aspect that I find is incredibly important in working towards sustainability. 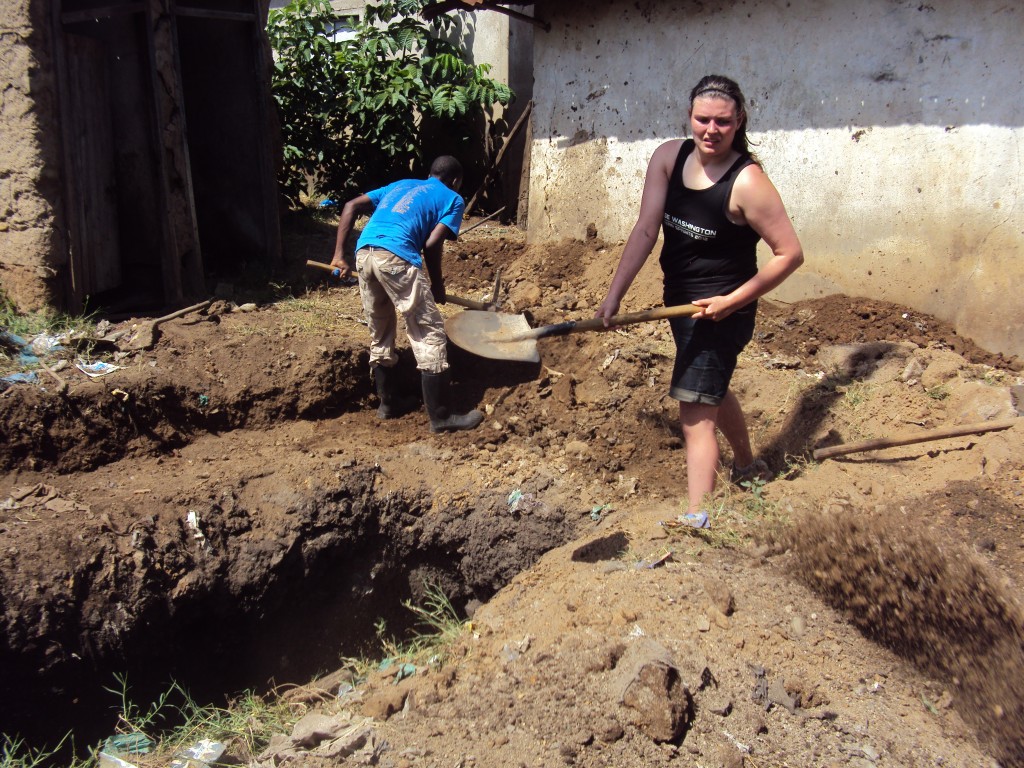 Ashley being the badass that she is.

Throughout this week of preparing the library and building the toilet, one thing has certainly been consistent: the clear yells of ‘MZUNGU! HOW ARE YOU!’ by children running left and right. 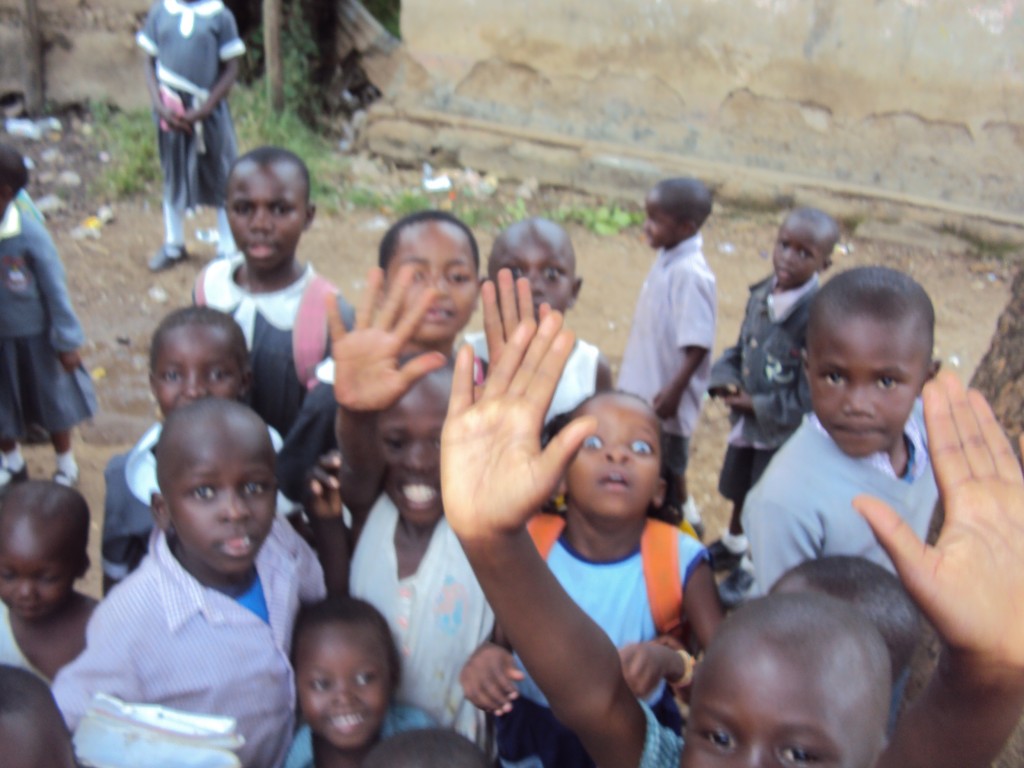 The children we’ve met throughout this trip have clearly loved cameras.

Along with the library and toilet, we’ve been working with YCCM in speaking to various schools and visiting the Kisumu Remand home.

We visited the remand home 3 days in a row. This home is where both lost children stay, and where child offenders of crime are placed in. Especially considering the fact that most of the children are non-offenders, this setup by the Kenyan government is clearly unfair. 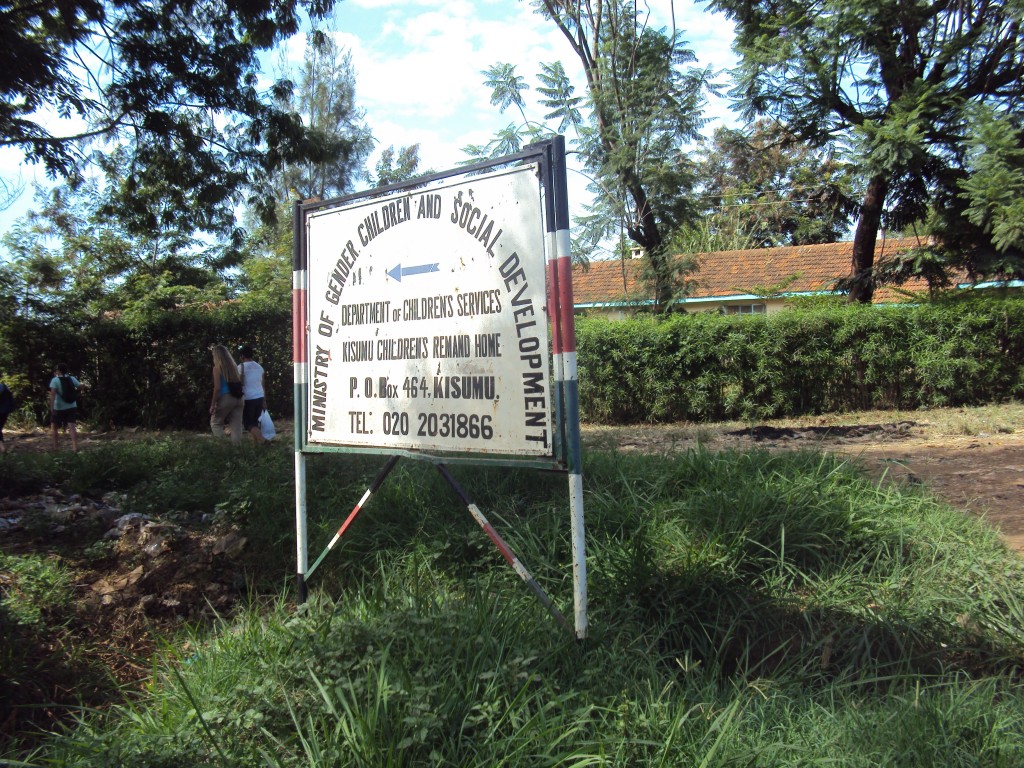 The stories given to us by the workers and the children were incompatible. It was clear that the children were not receiving any education anytime during the week. They described how their beds were infested with bed bugs; their latrines and toilets clogged; their desires for toothbrushes to clean their teeth, and other dissatisfaction.

Of course, for many, their first desires are to help. However, after reading many accounts of the implications that come with development and the desire ‘to help’ has made me pretty pessimistic. What about sustainability? What if our help only creates more need? How about post-colonial relationships? Questions like these have made me look at development with a little more disdain than I should.

Luckily for me, these are questions that my trip leaders and fellow trip members also ask. After much thought, we agreed that some of our fundraising money should be used for purchasing toothbrushes and toothpaste for the remand home children. Their wishes for better hygiene were clear, and the implications of giving such were not as bad as other ideas. For instance, donating money for the home could lead to the possibility of the Kenyan government cutting funding to the already insufficient home. Food and toys could only last for so long until it’s consumed or broken. Toothbrushes and toothpaste, then, it is. 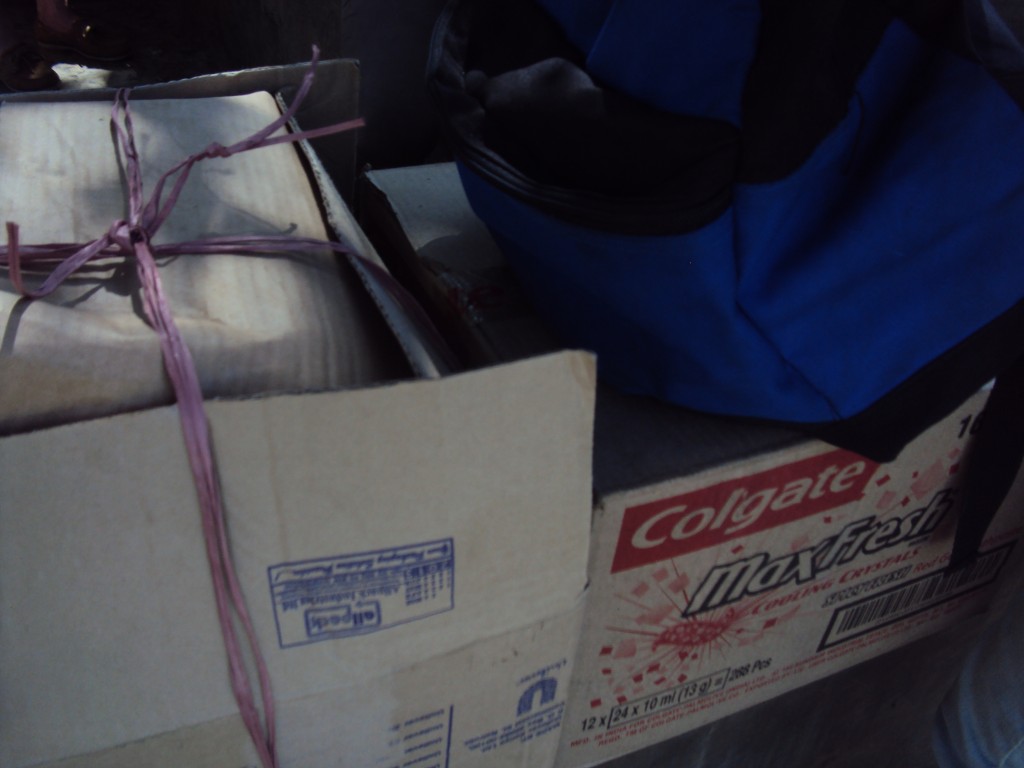 Aside from what dreary sadness my description entails, I want to emphasize how incredibly intelligent and resilient the children are. Their clear cries of joy whenever we visited made me realize that perhaps I’m not doing more harm in this country than good. The happiness I get from them, and they give to me, seem to be at equal levels. Or at least I’m thinking so at this moment. 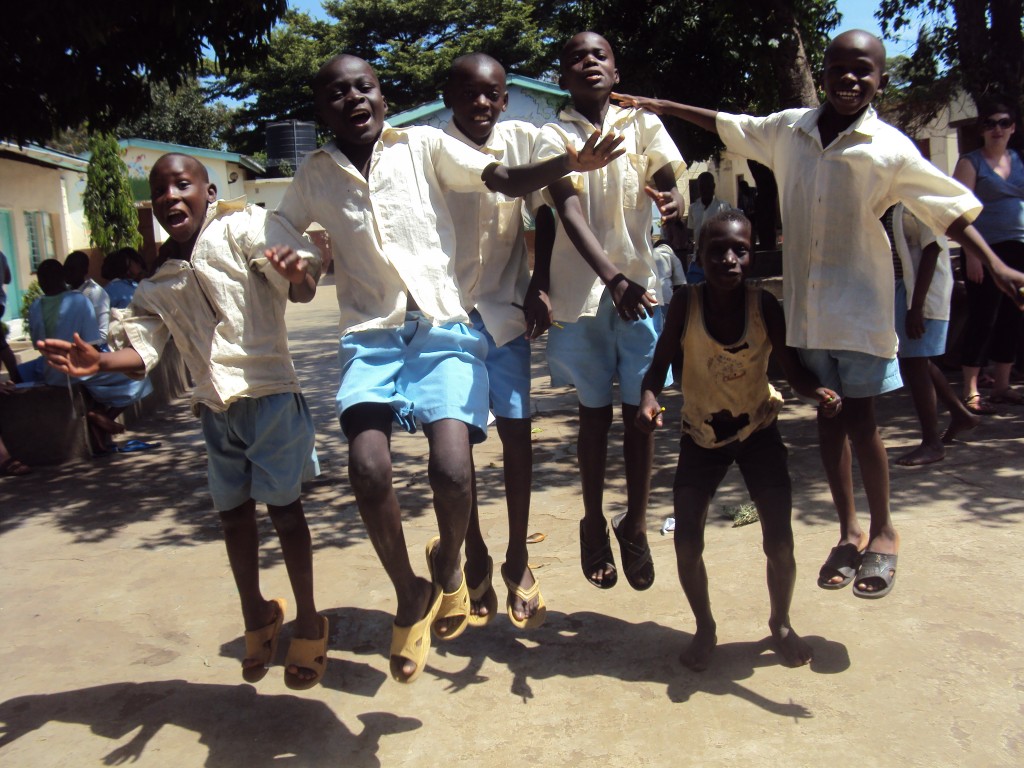 These boys LOVED the camera.

We also brought them paper and crayons to practice some of their creative energy. 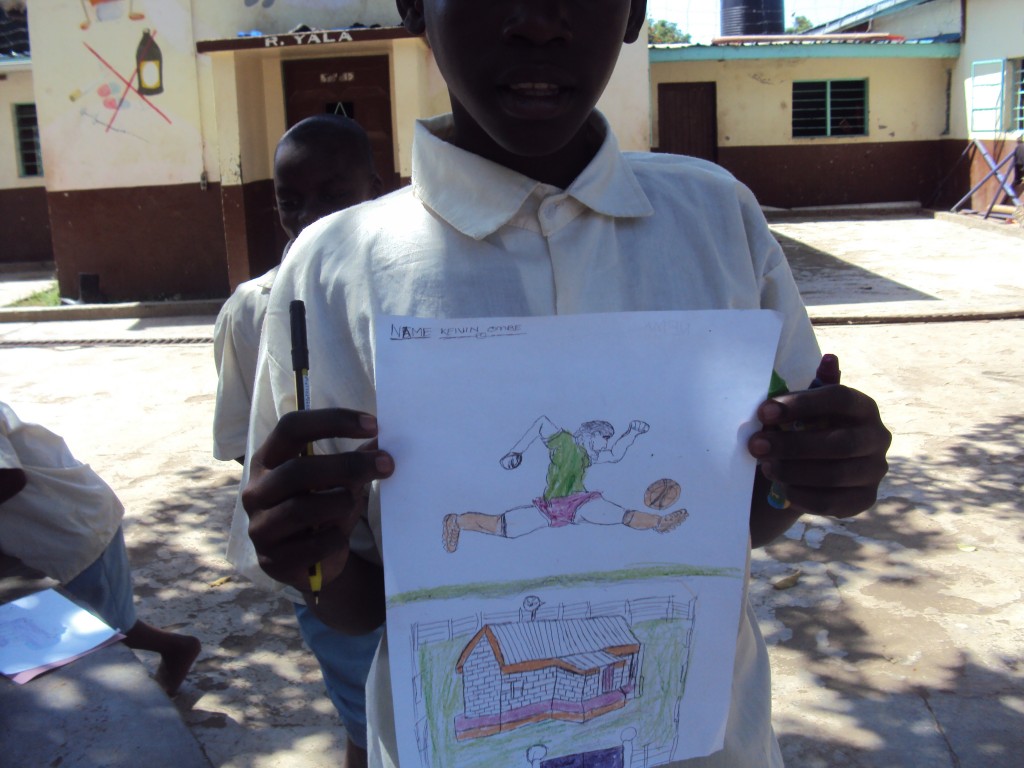 But in the end, it became clear that the children were CRAZY for our cameras. They loved to take pictures with them, each fighting to get a hold of the camera to take pictures of their friends. 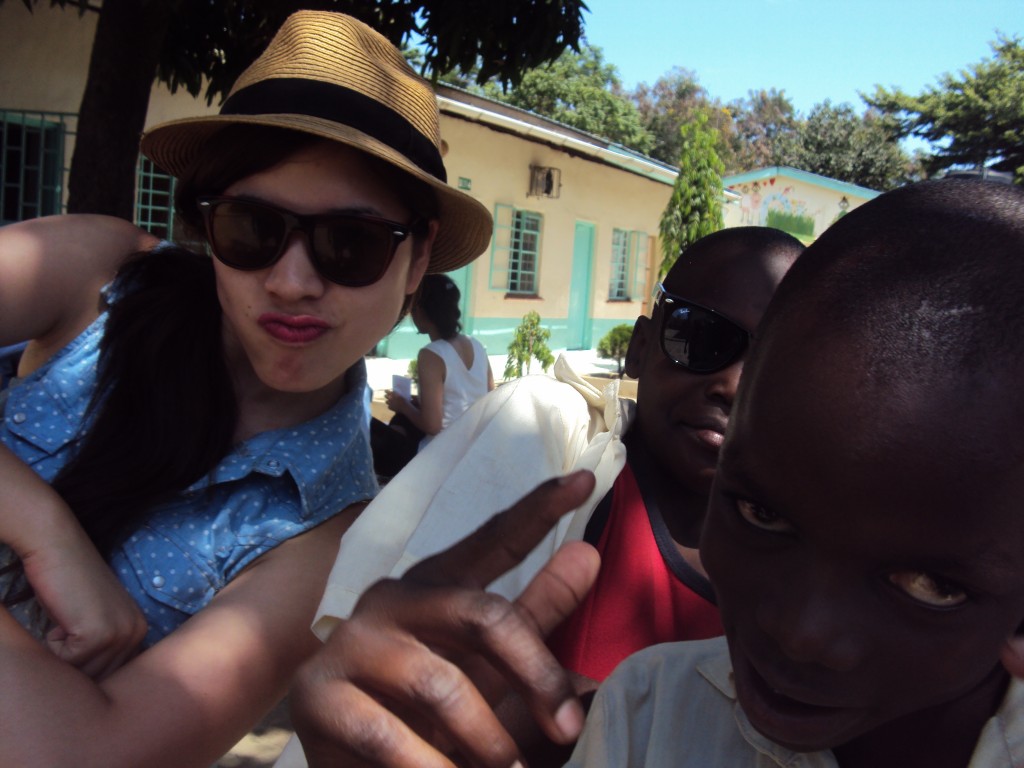 They also liked to pose and wear sunglasses like their weirdo visitors.

The remand home really helped me see that I’m not being detrimental to the communities I’m visiting. OG’s commitment to working with local NGOs, which know the true significant issues to address within their local communities, is something that made me drawn to them in the first place. I’m beginning to see that this commitment is something that’s helping me see that I probably did make a good decision coming here. 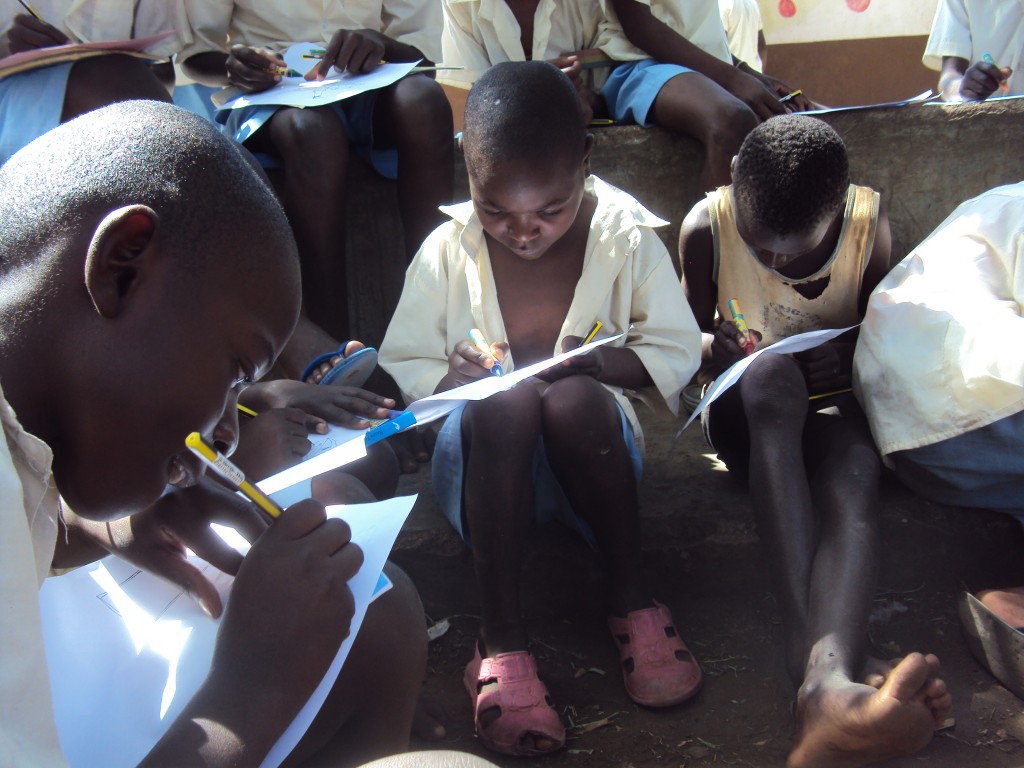 The visits to the remand home were a definite highlight for me.

We also went to a primary school within Nyalenda that one of YCCM’s members, Winnie, attended as a child. There, my group discussed with a group of children what traits their ideal woman and man had, and how those were not the same to the traits possessed by a significant man or woman in their lives. 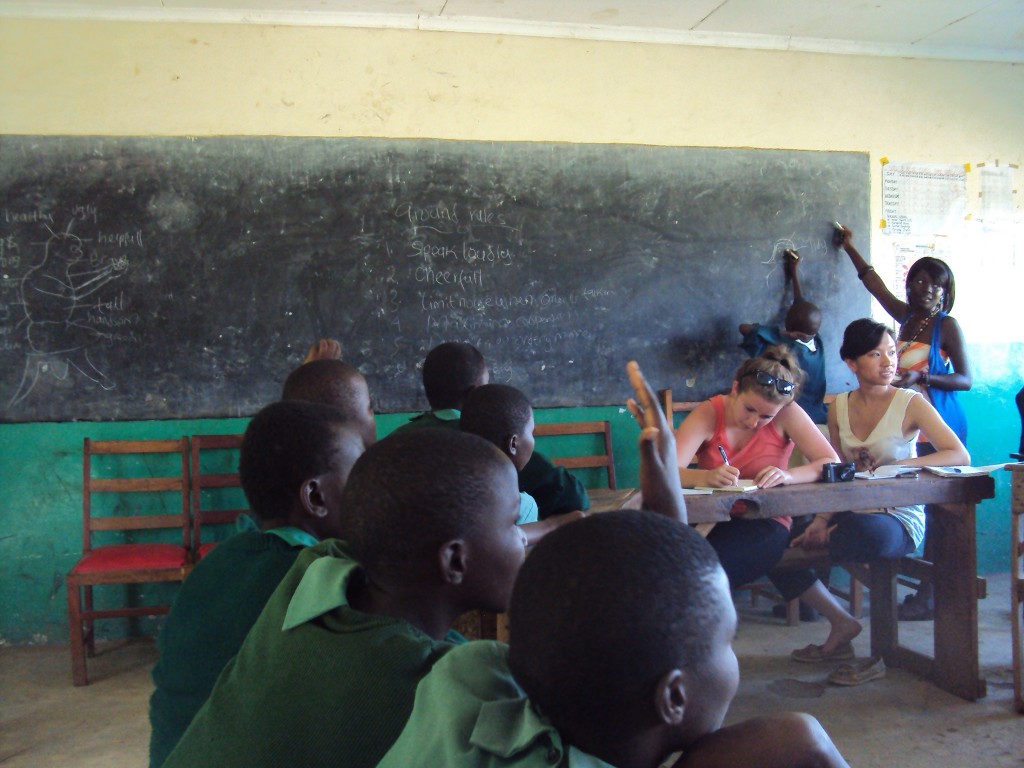 Gender, human rights and sexuality discussion within a class in one of Nyalenda’s primary schools.

Our presence there as Westerners made the discussion uncomfortable for us at times. Who are we as outsiders to come into their classrooms and tell children how they should view gender? My pessimism kills me at times, but I keep in mind that these visits and discussions are organized by YCCM. If YCCM is made up of community members, I can somewhat trust that they know what they’re doing. They wouldn’t have organized discussions like these with our participation if they found it wrong. Thinking about it now, YCCM is usually really happy with our work within these discussions.

We also visited the Kisumu Polytechnic school – one of the universities here. We also spoke about Gender, human rights and sexuality. We got some verses from the Bible that support women’s subordination thrown around, but luckily our trip leader Meg is a badass who proved the lack of adherence to all of the Bible’s sayings by participants. The discussion really got me frustrated at times, especially whenever the men would (attempt to) reason how rape is always due to woman’s lack of modesty, but the strong arguments given by the women students in the room really made me happy.

So that’s that, for now. We’ll be here in Kisumu with YCCM for 4 more days until we enter Uganda and continue this crazy adventure.

To end this too-long blog, here is Julian Assange’s barbershop in Nyalenda: 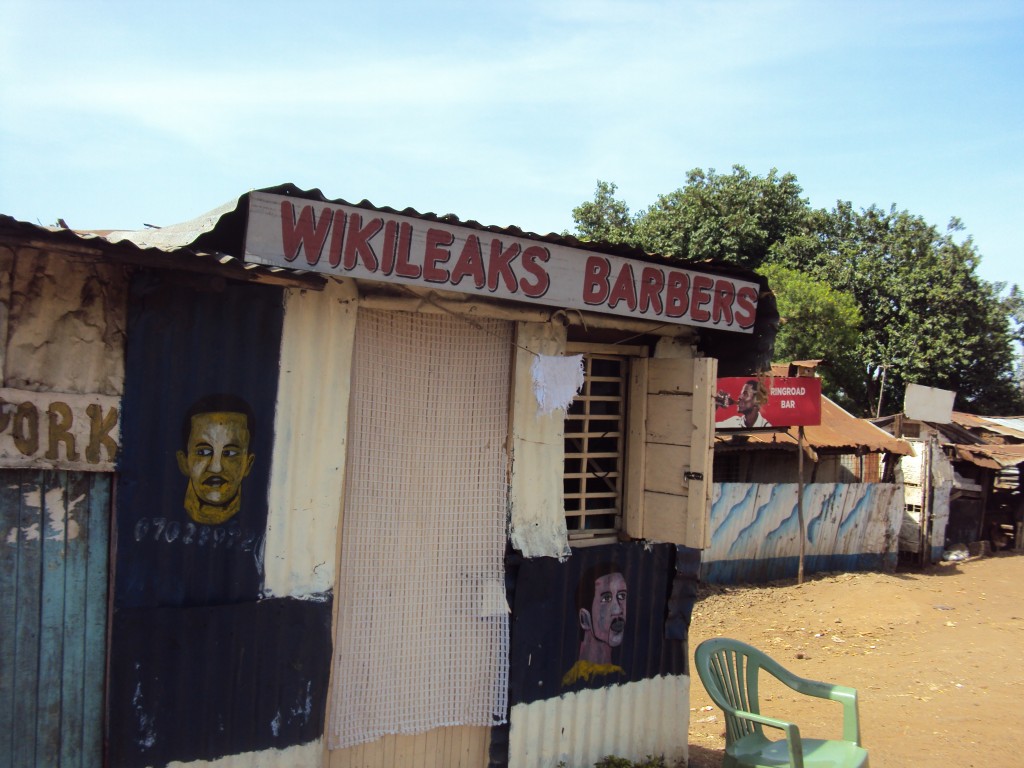