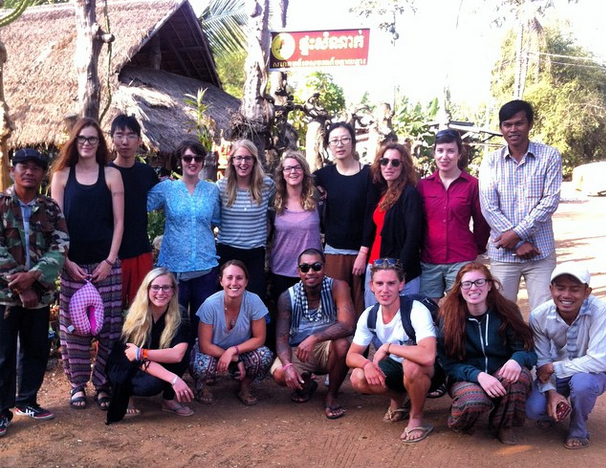 03 Feb Tales from the Road: Chapter 3

Posted at 22:06h in Southeast Asia by Justine Yu

This blog post is a combination of three first-hand accounts written by our Southeast Asia: Cities & Sanctuaries team members which, together, paint a picture of our time in the commune of Banteay Chhmar, Cambodia.

Our last day in in Banteay Chhmar was so jam packed with activities and fun. It’s hard to believe that it all happened in the same day. We had an early start (as always) eating a satisfying breakfast at the restaurant to prepare for the day ahead. We walked to the community-based tourism (CBT) office and were greeted by a group of Banteay Chhmar children. Each of us sat around the big CBT table and paired up with a child or two from the community. We then went back and forth learning Khmer phrases from them, and them learning some English from us. It was clear that their English was way more advanced than our Khmer and I think they got a few good chuckles at our expense.

After saying goodbye to the children, and thanking them for teaching us, we went to visit a nearby primary school. At the primary school we were able to look at the washroom sanitary system that had been built there using money that was donated by Operation Groundswell. I think it was nice for all of us to see a concrete example of how money donated through OG gets used in the communities we visit.

We were quickly swarmed by primary school children that were curious about our presence, and we quickly left the school before we started a full blown child mob. We then hopped onto the back of two “cow machines” and took a ride down dirt roads and narrow paths to a place that was undisclosed to us. We climbed out of the vehicles to discover that we had been brought to Soukoun’s (one of the CBT workers we had been introduced to previously) personal fish farm! 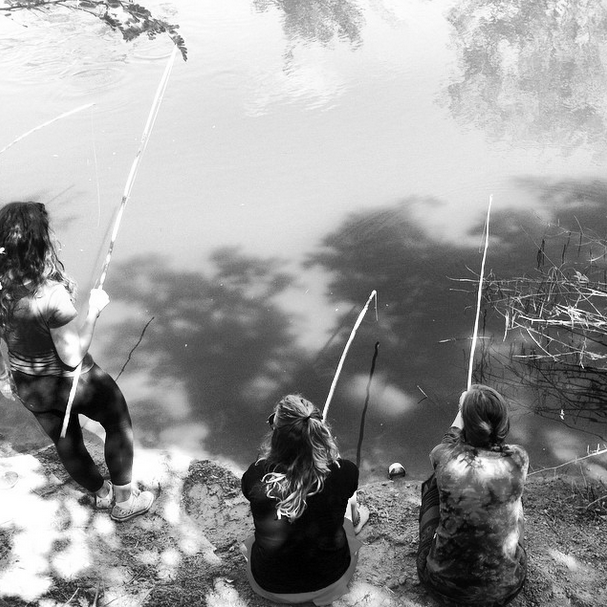 It was a small patch of water only about 20 meters wide that was loaded with fresh fish. We all grabbed some rods made of only wood, string, and a hook, and began trying to catch fish. The pressure was on to hook some good ones because we were told that our catches would serve as our lunch! It only took about 10 minutes for Eliza to pull out the esteemed first fish. After that, everyone started to catch a few until we got enough to provide us with a hearty lunch.

We returned to the cow machines and headed back to what we thought was the CBT office for lunch. We were surprised when we passed the office and were heading to an unknown location for lunch. 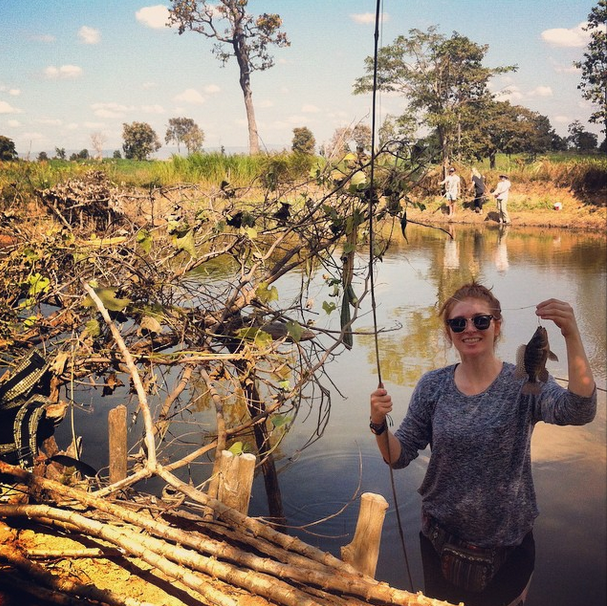 We reached a beautiful spot where we could see mountains in the background and a water lily covered man-made lake surrounding us. We all took a boat trip down the lake. Some of us even made the impulsive decision to get in the water! We then jumped into the lake with our clothes on and had a brief, but refreshing, swim.

Our freshly caught fish ended up being the perfect treat for our afternoon near the lake. We hung out in a cool little hut where we dried off and relaxed for hours. Once we returned to our homestay houses we had some time to relax and get ready for the party in the evening. 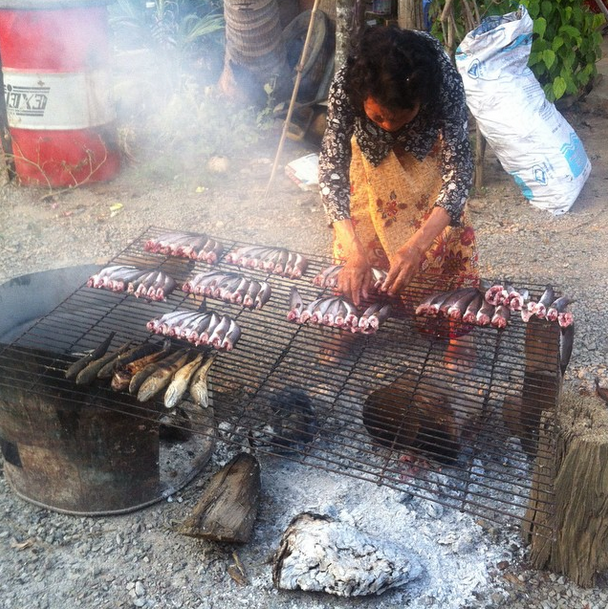 I and some of the others in the group had fun using that time to play with a group of the local children who, even though we couldn’t communicate verbally, were very eager to have us play games with them.

In the evening we sat down with people we had met from the CBT, council men, and other community members to share a delicious meal together. It was a great feeling to dine and chat with community members, it really made us feel a sense of home. After dinner, a traditional Khmer band started performing music. We and the community members began dancing, and they tried to teach us some classic Khmer moves. Brandon and I ended up performing an American style song to the community to show a little bit of our culture to them.

It was nice that we got to participate in an exchange of culture through the medium of music and dance. We danced and laughed together until late into the night. I think a lot of us were surprised to see that the grandpa, the oldest one at the party, was out-dancing us right up to the last song. It really was a joyous end to our stay in the amazing village of Banteay Chhemar!