24 May The Brown Gringo Travels

Posted at 13:46h in South America by Operation Groundswell

(An update from the Peru: Mind and Body Crew!)

Though the name is a work in progress and may be potentially changed [referring to “The Brown Gringo Travels”, the name of his own personal blog], those who know me can and will appreciate its accuracy. This half Pakistani/Israeli is now taking a break from being a member of the American workforce to indulging in the beautiful views of the Pacific Ocean that can be seen here in the beautiful suburb of Miraflores, Lima. I finally made it to South America.

My timeline outside of the next six weeks remains quite vague but I welcome the uncertainty and the surprises. Over my first few days here, I’ve adjusted quickly and easily to the pace of Lima. Clean roads, beautiful parks, rocky beaches, bustling restaurants at lunch time serving ceviche “y arroz con pollo”. 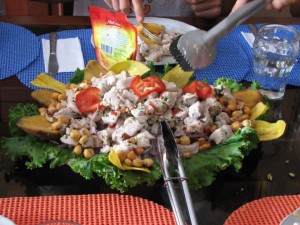 On Monday, I had some of the best rice I’ve ever tasted for lunch with my pollo. “Muy rico”! I mean how often does one rave about rice? The days can be sunny with the occasional fog rolling in. Summer is just ending and the fog will get progressively worse but it is manageable for now. Looking over a cliff down to the beach and the Pacific ocean, the view is easily lost in the hazy gaze after 5 o’clock.

The first day was exhausting. Waking up at 7:30 in the morning to “desayuno” that entails toast, jam, butter, tea and the occasional piece of pineapple or banana definitely leaves the stomach wanting. The HQ Villa Hostel and its occupancy of what feels like 100 people saves the eggs and cheese for its met life volunteers from the University of West Virginia. But we don’t mind the neglect. Twelve volunteers and two veteran travelers of South America (the wonderful Matt and Lindsay) don’t need much. We take Spanish lessons from 8:30 to 12:30, which will be implemented everyday until we leave Lima this Friday for Cusco on a 19-hour bus ride. They split the group up based on level and I’m placed in the beginner class with Gabriel, a 5’1” local Peruvian who consistently uses the adjective bajo to describe himself. Lunch always follows Spanish classes with an appetizer, soup, entree and a local dessert. My meals thus far entail ceviche, arroz con pollo, ensalada de palta…and other meals with a variation of chicken…can’t remember all the names in Spanish so clearly I have no idea what I’ve eaten. But it has been delicious. 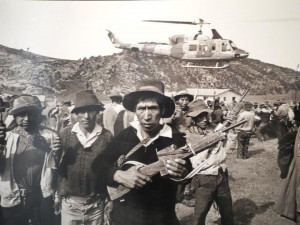 Our last lunch on Friday before our departure should be the local Chinese food which does an amazing fusion of Chinese dishes with local spices. We’ve indulged in a three hour bike tour, a visit yo the Canadian embassy as I’m traveling with a majority of Canadians and the American embassy clearly had other things to do. We visited the Museo Nacional and saw an exhibit about the Shining Path, a Peruvian terrorist organization from the 80’s and 90’s that killed approximately 70,000 people. This week has been a good form of settling in that we all needed before venturing deeper into Peru and our local work with children on the farm outside of Cusco. Thursday night, we went out for seafood dinner and I bought a round of beers in celebration of the Knicks winning game five at home and keeping the dream alive. We created out of the restaurant and found a local bar. The group was relatively tired after an afternoon of running around. Some of us found ourselves in a local park playing ultimate frisbee for an hour so many people were pretty exhausted when we got the bar. Intense match and workout. A few pisco sours and some cervezas did the job nicely though and knocked us out. The ladies went home but Matt, myself and Nick decided to stay out and catch the local reggae band perform. Guys night out was fun despite only getting three hours of sleep and the reggae group “root farmers” had a cool sound.

But I’m ready to move past Lima. It’s Friday morning before our last class and we leave for Cusco this afternoon…hopefully I’ll share the next chapter in a few days. Hasta luego..

-Taken from Nour Shaikh’s, one of the group members, personal blog