29 May Through the Mirror, to the Hills

Posted at 09:31h in Southeast Asia by Operation Groundswell

From bustling, hot, 14 plus million people Bangkok, we boarded a third class 12-hour night bus to Chiang Rai, the northernmost province of Thailand. The next phase of our summer backpacking adventure was a mountain trekking and volunteering experience with the Mirror Foundation, a local organization working with the various hill tribes that populate the rural, mountainous northern region of Thailand. After a night in Mirror’s jungle headquarters just outside of Chiang Rai, we strapped our day packs on and began the six hour hike up the mountains to J’Ga, a Lahu village of roughly 20 people with no electricity and only recently running water. The hot hike led us through soon to be planted rice paddies, bamboo forests, and streams before our tired feet and sweaty bodies arrived in the remote community nestled on a mountain ridge. Surchai, our Lahu bamboo expert guide, helped us settle into our large bamboo hut where for the next four nights the 11 of us would be sleeping on bamboo and woken up at the break of dawn each morning by screeching chickens, rummaging pigs, barking dogs, and the laughter of the local children.

Our three-day project was to build a community building for meetings and other gatherings. On the first morning, part of the group used basic hoes to clear and level the land while the rest of the crew tromped into the jungle to haul out bamboo ranging from the diameter of a wrist to that of a thigh and over nine meters long to use for the construction of the sala. Due to the small population and most working age males having moved to their wives’ villages, in the valley attending school or working, our able bodies were needed for the physical labor.

Working in shifts with the help of a few expert hill tribe builders in the morning and afternoon with a long break during the middle of the day to beat the heat, we slowly saw the structure evolve from a bamboo skeleton to a thatched roof engineering feat using only machetes, a hammer, a handful of nails, and thousands of handmade bamboo ties.

At the end of each day, our clothes soaked in sweat and caked in dust and dirt, we rested our tired bodies and blistered hands on our bamboo floor that surprisingly felt comfortable after a long day of work and heat. With only one bucket shower at our disposal, we took turns dousing our bodies in cold water and changing into our other outfit—one set of clean clothing. We rested and rehydrated until Surchai hollered gin khao, our sign that the food was ready and it was time to eat. We ambled up the dirt road 15 meters to the kitchen and dining room, a bamboo floor, where we filled our plates with rice and the simple yet delicious local fare of fresh vegetables, eggs, and for a few meals pork. After an abodyah to express our thanks to the Lahu ladies who prepared our meals, we headed back to our communal hut to catch the last glimpses of sunlight as the orange sun sunk behind the green mountains.

On our bamboo porch we sprawled out and entertained ourselves with rambling conversations, games of Euchre, and solitary moments soaking in the glowing black mountains set against a darkening sky lit by a shimmering moon and twinkling stars. The sounds of crickets and frogs accompanied by the rattle of the wind blowing through thatched roofs blended with the chatter coming from our neighbors’ homes and the rustling of animals settling in for the night. While dawn brought the village to life, dusk sent it to a still quiet. If we stayed up past 8:30pm, we felt like we had stayed up late. 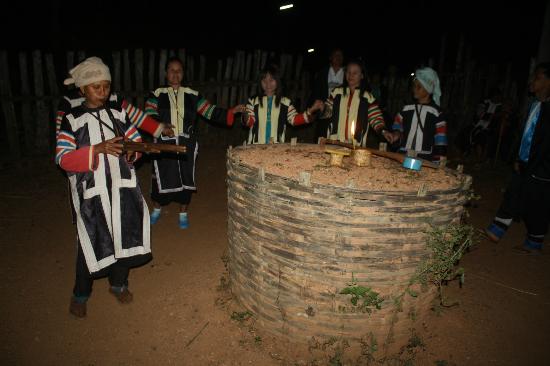 After completing the sala, we relished in our accomplishment and witnessed the preparation of a pig slaughter in honor of the new building.  With our feast of fresh pork settling in, we joined the Lahus in a sunset lesson in circular Lahu dancing driven by an elder woman playing a bamboo flute. The next morning after a hearty breakfast to fuel our bodies for the descent, we squatted in a line from youngest oldest and the elders of the village first poured water over our hands to cleanse them then tied white strings around our wrists while chanting prayers of protection and success. We were informed to keep them on for at least seven days. 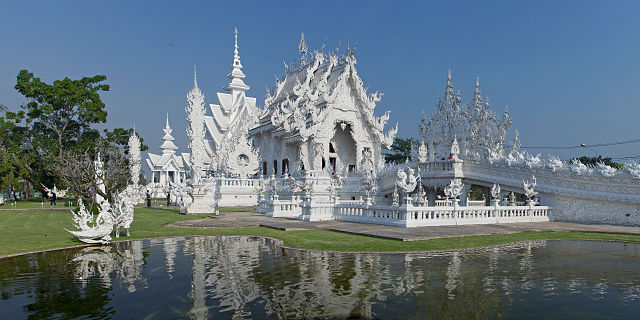 Eager for a night on a bed, a proper shower, and other modern amenities, we ambled two hours down the beautiful mountains and rice paddies before taking a long tail boat one hour down the river through the valleys and small towns of Chiang Rai province before disembarking in Chiang Rai town where we headed to the guesthouse.  Our last day in Chiang Rai was filled with a tour of the White Temple, a contemporary and untraditional all white temple showing many of the ills and moral distractions of our society from painted scenes of 9/11 to Mickey Mouse as well as taking in a waterfall hike and the night bazaar in the evening.

Having readjusted to modern life yet relishing in our inspiring and challenging days in the mountains with hill tribes who only make $165 a year as a family and cannot legally travel outside of the province, we were ready for the next adventure of our summer—the cultural capital of Northern Thailand—Chiang Mai.