Posted at 10:49h in East Africa by Operation Groundswell 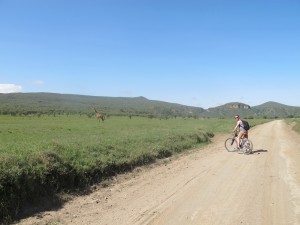 The other day the Gender and Human Rights team went to Hell’s Gate National Park to get our butts kicked into shape by our awesome guide Joseph. For those of you who were never children, the Disney movie Lion King was modeled after this park. It was a kid’s dream come true to see the animals roaming the plains, climbing up Pride Rock, and mourning the Death of Mufasa at the gorge. It was a true testament to see how far we could push ourselves as individuals and as a team.

In the morning we biked a couple of kilometers from our campsite to Hell’s Gate. From there we were welcomed at the main gate and kept on trekking through. Right away the scenic views were breath taking and the animals grazed to our amazement. The camera was a definite must! The animals we saw there were mainly zebras, giraffes, and warthogs. Overall, with the biking and picture taking it took about 2 hours. After the bike ride we met up at a beautiful picnic area where we munched on peanut butter sandwiches and peanuts. Besides the failed spaghetti we tried to make over the campfire, these sandwiches were the first recognizable food I’ve eaten. I can’t complain though because the food has been great so far! 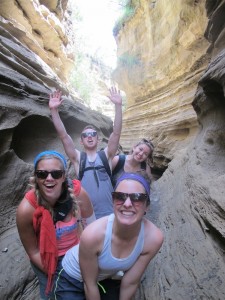 After lunch we teamed back up with Joseph, who helped us survive the gorge. It was astoundingly beautiful with towering rocks, flowing waterfalls, and comforting hot springs. There was some tough experiences like climbing and descending rock walls, but with the encouragement of the gang and the help of our Joseph we all managed to do it. At the end we were all happy with ourselves and amazed at what we accomplished. It was a really great day. Showers and food were well deserved at the end!

Written by Taylor and Ashley 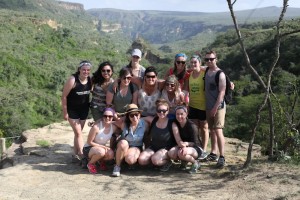