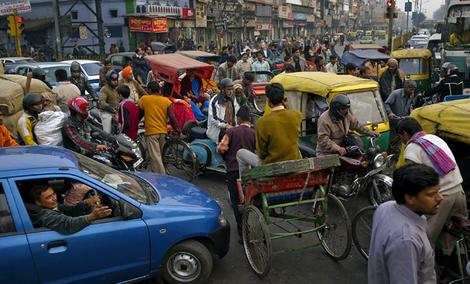 Posted at 21:03h in South Asia by Justine Yu

Imagine cars, buses, motorcycles, pedestrians, rickshaws, and cows clustering together, honking at each other, and fighting to get ahead. The distinction of lanes blur as each vehicle pushes their way through the traffic. Everyone is assembled together and drivers attempt to inch forward into open space. Welcome to Delhi at rush hour!

The culture shock of Delhi rush is nothing a westerner could imagine. Even in traffic packed cities like San Francisco and New York, the aggression of drivers in these cities pales in comparison to the drivers of Delhi. The surplus of traffic causes a sensation of burning in the eyes, at least for me, from the emissions of smog. The smell of cow manure, diesel gasoline, and Delhi pollution stings the nostrils and causes congestion to avoid the further intake of aroma. As a westerner, Delhi rush hour is nothing I have ever experienced before in my life.

I sat in awe in the back of the rickshaw wondering how such organized chaos could feel so soothing. I watched our driver look around and plot his next move to inch forward, like a chess player plotting his next attack. As much as I attempt to describe the chaos of Delhi rush hour, no words could accurately describe the insanity. Tensions flared as we raced against time to make our bus, yet despite it all there was an overwhelming calmness within me.

We didn’t make our bus. In fact, we missed it by almost an hour. But we improvised and rented taxis to follow and catch up to the bus. Although the experience was stressful, we made fun memories from the lesson to learn. We caught up to the bus eventually and made our way to Dharamsala. As travelers, half the fun is getting lost only to find we were on the right path to begin with.

From a Western perspective, it is simple to judge the chaos of Delhi traffic. We are accustomed to staying in our lanes, only using the horn when we deem it right to do so, and allowing other cars to go ahead. However, the beauty of the organized chaos of Delhi traffic lies in the calmness of the driver. As I observed our driver, he displayed little to no road rage. He simply looked for his next move. The only time he articulated concern was when he seemed afraid we were not going to pay him for being late. Other than that, his calm demeanor helped keep me at ease. The most shocking aspect of Delhi rush hour was the lack of car accidents one would expect.

I am not saying that Delhi’s modes of organized chaotic traffic is better than traffic in the United States. It is just different. As travelers in other countries, it can be easy to critique the lifestyle and culture of the citizens of the countries. Instead of critiques, we should develop a mind set of observance. Then and only then can an individual truly experience the culture and lifestyle of the country. And in the case of Delhi traffic, I encourage all to sit back, relax, and enjoy the ride.